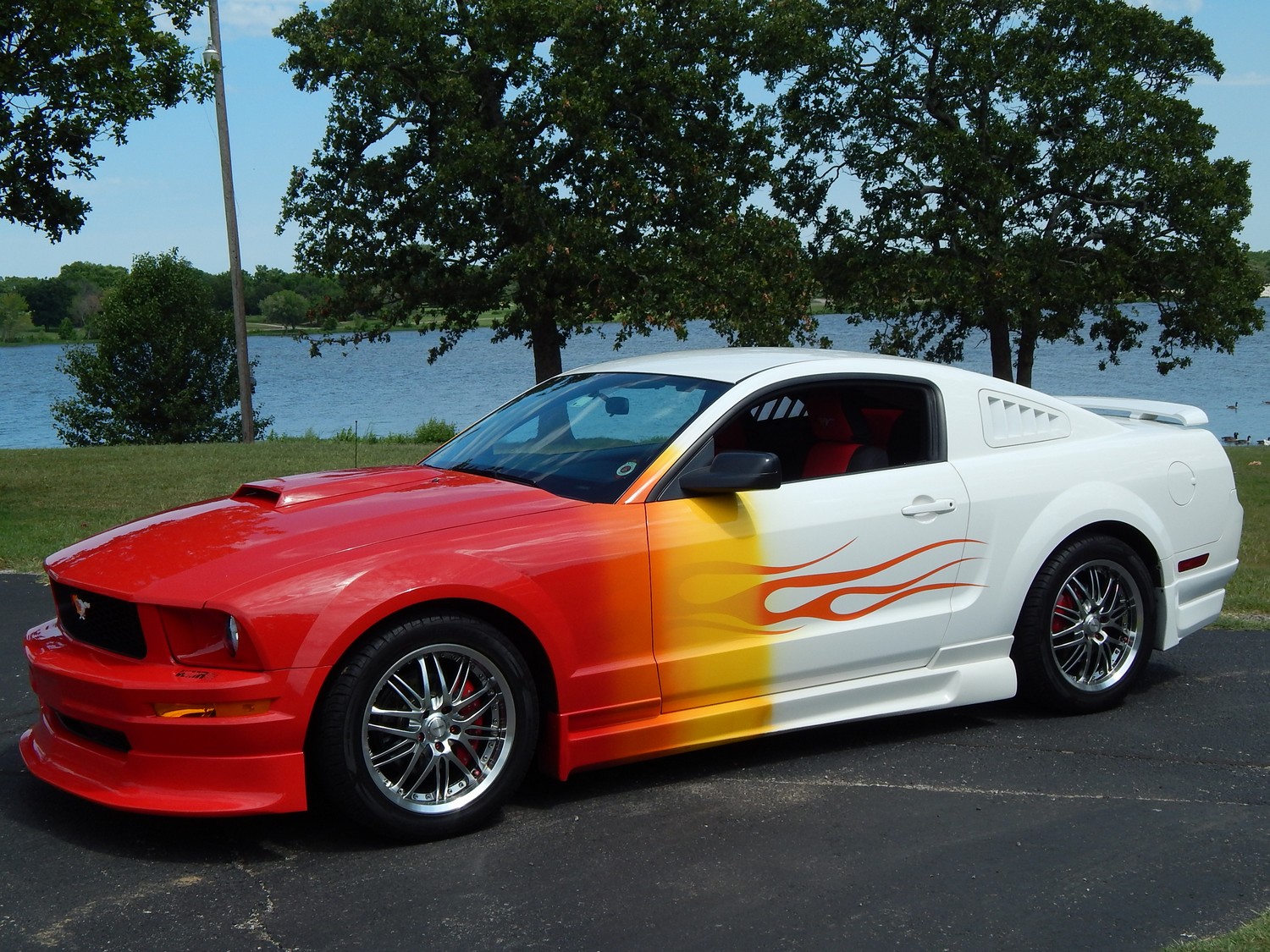 Meet Hot Pony! She went unidentified her first year because she was abused and misused. She was born in 2007 and originally placed at a dealership in Ft. Smith, AR. From there she was sent to Mark III Customs in Dallas, Texas to add their beauty touches of ground effects and special paint scheme.

Within her first year of age, her first adoptive owner became ill and she faced repossession and once again placed on the market. Steve Young and his wife, Rita, fell in with the car and adopted her.

She hadn’t been around or seen much of the country with only 11,000 miles to her record. Within six months she became identified with her new name tag (license plate)of HOTPNY, short for Hot Pony, as recognized by the State of Oklahoma as well as recorded with the White Mustang Registry #0813.

Since then she’s been adorned with multiple glamorous accessories, additional performance features for strength; entered beauty pageants locally, regionally, and nationally and presented witha garage full of 1st & 2nd place trophies; has appeared in videos, websites, newspapers, magazines (including being featuredin a solo pic in MCA’s Mustang Times); on the USS Lexington aircraft carrier deck during the Mustang’s 50th Anniversary celebration in 2014; andhas seen many beautiful sights registering 118,000 + miles as she’s traveledacross the U.S. trails. She also has her own personal identity logo as seen on the grille pony, front seat headrests, steering wheel, and trunk badge.

Steve is a 71 year old former firefighter/paramedic. At the age of six-months old, Steve lost his mother due to a ruptured brain aneurysm. At the age of 5, he was kidnapped from California and brought to Oklahoma where he experienced various forms of abuse. By age 8 years old, he was placed in the first of three boys homes until after he became a teenager. He has written a book entitled, “Six Feet Deep: Burying Your Past with Forgiveness”, which goes into detail of his life’s experiences. For the past 18 years, as an ordained minister and with prison ministry, He has reached out to thousands of inmates, who have shared similar experiences. In addition to ministering to these people in chapel services andone-on-one visits, he also establish an accredited Bible College within prisons both nationally and internationally. If anyone is interested more about this, his website is: www.doorsofcompassion.org