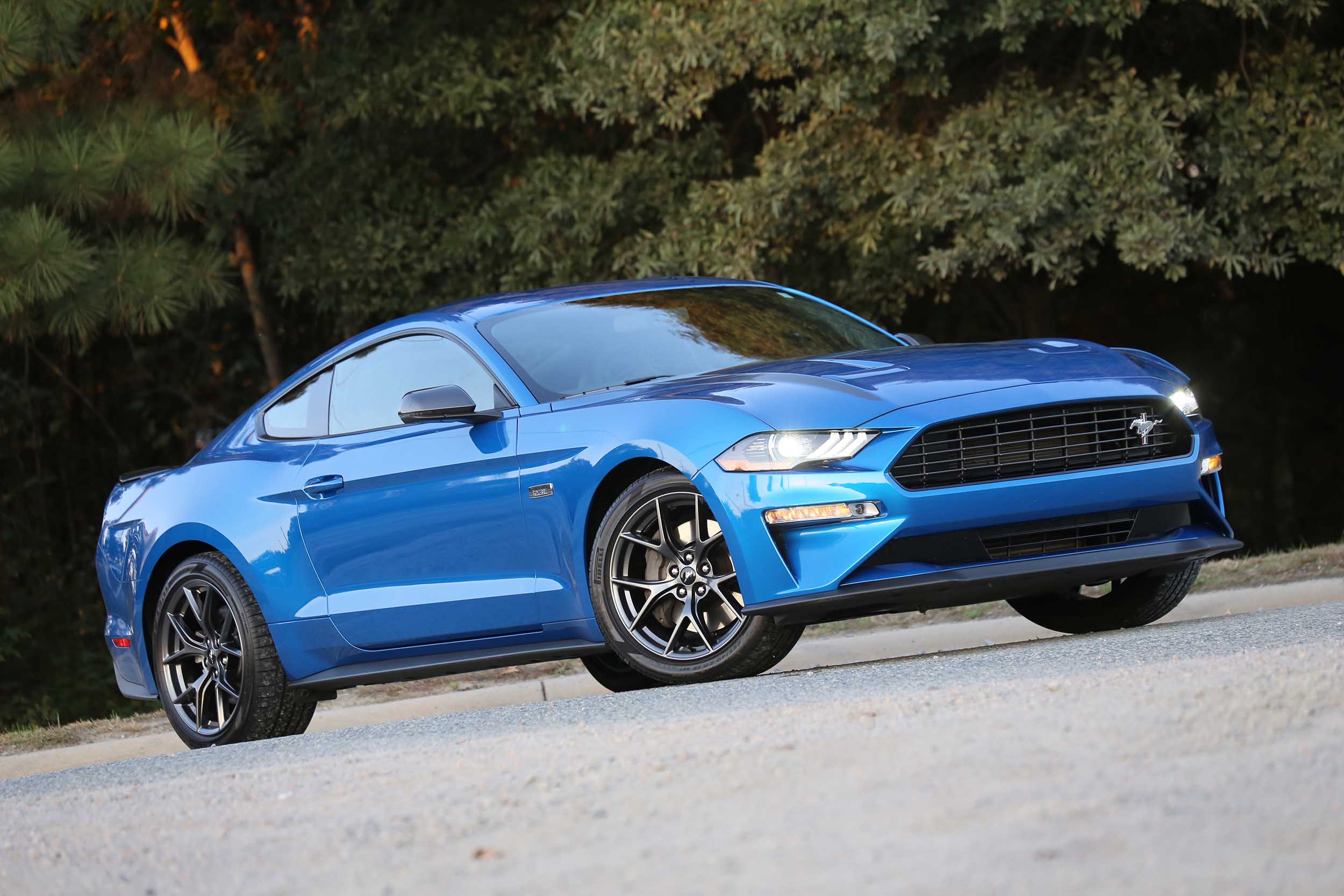 Merging the onramp, an open road urges my foot to the floor.

I keep it there as I flick the shifter atop the MT-82 six-speed manual and my steed lunges forward. It doesn’t exactly snap my neck, but that shove deeper into the form-fitting Recaros elicits a smile. I always forget just how much fun this combination can be. The car in question is the EcoBoost-powered Mustang enhanced by the optional 2.3-liter High-Performance Package. In short, it blends attributes of the dearly-departed Focus RS and the Mustang GT Performance Package to create an entry-level Mustang that is anything but base.

Having driven one in California, your scribe had some experience with this fun and affordable combination. It had been many months between the time behind the wheel of a coupe, to the unique opportunity to drive both a coupe and a convertible nearly back-to-back in two different states. Providing the occasion for another spin in a Mustang coupe fitted with this package was the 2020 Shelby GT500 North American Track Tour stop at Charlotte Motor Speedway last fall. It was only an overnight stay, but I drove the Velocity Blue coupe as much as I could, and it was a hoot.

As a refresher, this package sports a tuned-up 2.3-liter EcoBoost engine that utilizes the same 63mm twin-scroll turbocharger deployed on the last Focus RS, which is 5-percent larger than the standard EcoBoost Mustang turbo. It is paired with improved cooling and Mustang-specific calibrations for both automatic- and manual-transmission applications.

“The Ford Performance Focus RS 2.3-liter engine is a high-revving marvel, and anyone who’s driven this EcoBoost engine instantly loves how quickly it responds and delivers power,” Carl Widmann, Mustang chief engineer, explained when this package debuted. “When our team got the chance to try this specially built engine in a Mustang, we immediately agreed, ‘We have to do this.’”

If you drive one, you’ll be glad that Ford made the move. The resulting 332-horsepower and 350 lb-ft of torque will never challenge the output of the available eight-cylinder options, but the respectable output and lightweight front end make for a pony car that is tossable in the turns and fast enough to hold your attention.

“It’s not just the horsepower gains over the standard 2.3-liter EcoBoost, it’s the broader torque curve that delivers 90 percent of peak torque between 2,500 and 5,300 rpm, which is 40 percent wider than the base EcoBoost engine,” Widmann continued. “Plus, horsepower holds stronger up to the 6,500-rpm redline — enabling more usable power and torque for enthusiasts and weekend autocrossers to enjoy.”

Whether cutting through the canyons in Cali or ascending the onramps of North Carolina, this peppy four-banger applies power to the pavement courtesy of a chassis stiffened by a strut-tower brace and a suspension bolstered by stiffer front springs; a larger; 21.7mm rear sway bar; and unique EPAS, ABS, and stability control calibrations.

In practice, the platform and powerplant are a balanced package which makes it a blast to apply the power in the corners resulting in drama-free g-force fun. The car sticks and goes and when it is time to rein in the fun, its four-piston front brakes and 13.9-inch front rotors are up to the task.

While throwing the car around, the aforementioned Recaros definitely served their purpose in keeping the driver in place. They also proved quite comfortable when the throttle wasn’t wide open. That is when the drive-mode adjustability, manifested by the MagneRide dampers and Active Valve Performance Exhaust, allowed toning things down when needed. Of course, this writer left the car in Sport mode most of the time and always kept the steering tuned that way to keep the car’s response snappy.

In the end, the experience solidified my appreciation of this option. If you want a Mustang with a price tag less than a Mustang GT while delivering better fuel economy, but still sporting striking good looks and a fun-to-drive personality, it is hard to argue with this package. Optioning an EcoBoost Mustang fastback with the 2.3L High Performance Package ($4,995) and EcoBoost Handling Package ($1,995) still puts the sticker price of a car like this under $40,000, and that is definitely bang for your buck in an era when Mustangs can push into the six-digit range.

Just a couple weeks after an overnight dalliance with the 2.3L High Performance Package-equipped fastback, this author had the opportunity to spend a full week in a convertible fitted with the same package. The droptop can’t be had with the companion Handling Package, but it is still more fun than a base Mustang convertible.

While I have never really been a convertible guy, they do offer a nice change of pace to drop the top and hit the road. While the handling is less precise and the thrust is slightly muted by the convertible heft, this version was still great fun. It too was fitted with a manual transmission, which allowed blowing off some steam while banging through the gears.

Better yet, for a certified carbon fiber addict, this droptop sported the optional Carbon Sport Interior Package. This upgrade adds several visual enhancements, including Alcantara door inserts, Alcantara seat inserts, carbon fiber instrument panel, and a carbon fiber shift knob. This package looks great, and the base seats in the convertible benefited from heating and cooling, the latter of which is a godsend in Florida.

In the end, my feelings about convertibles haven’t changed. I am glad they are out there for people who want to cruise with the top down, but I definitely prefer the performance delivered by the fastback with all the upgrades.