Does The Mach-E Earn Its Mustang Stripes? 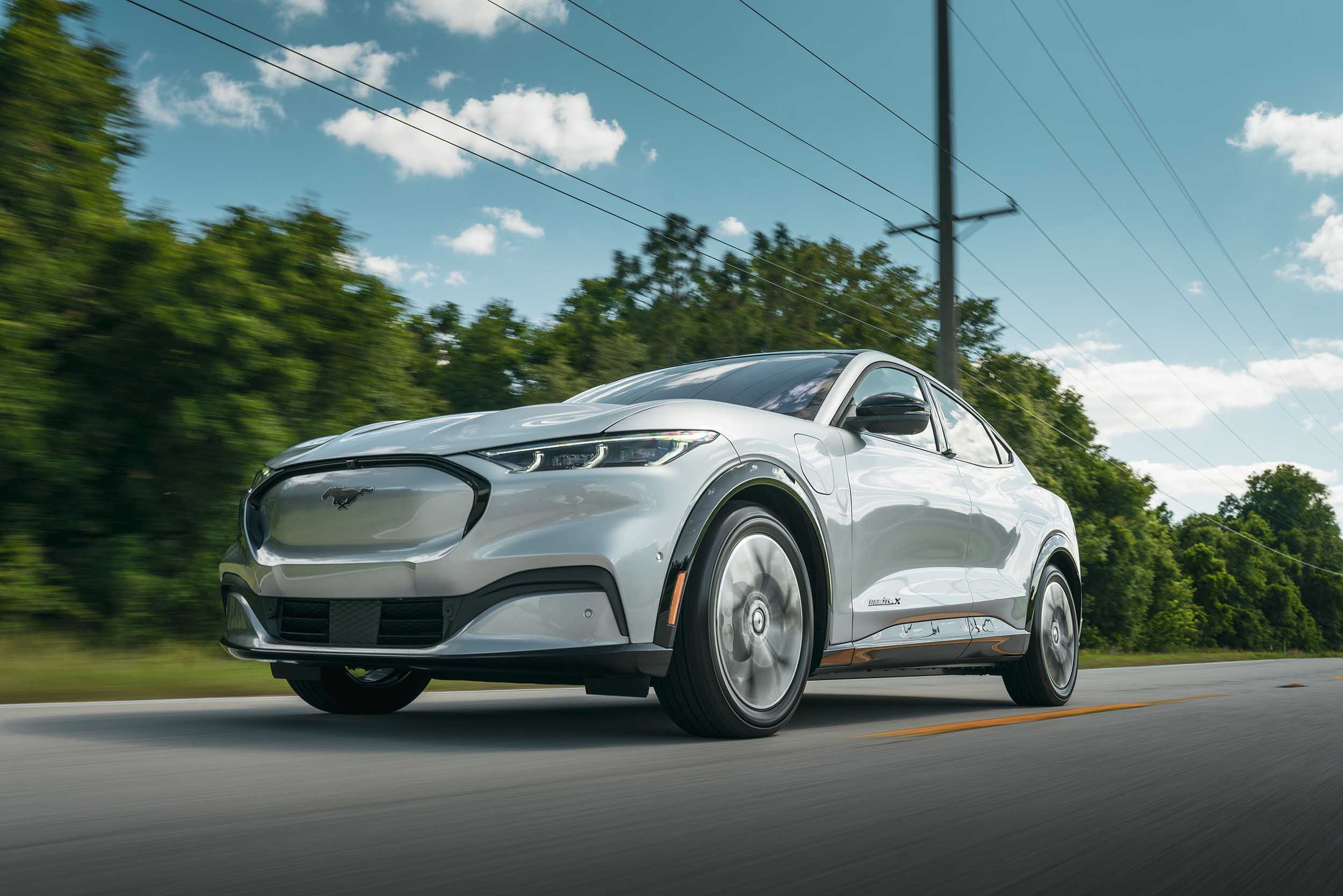 When the Mach-E was introduced, the world tried to wrap its head around the Mustang moniker emblazoned on the new, battery-powered SUV. Ford has made its intentions known, stating electric vehicles are on the car maker’s not-so-long-term plan. That didn’t shake the Mustang faithful nearly as much as a four-door bearing the name “Mustang.”

If we’re honest, we’d note the numerous other makers who have branched out into people-mover status with their vaulted brands. Many have done very well in the process, and if early awards are any indicator, taking top spot as the 2021 North American Utility Vehicle of the Year is a feather in Mach-E’s cap. Question is, has Mustang gone the way of the four-door, or has this front and rear seating set out to re-create Mustang entirely?

We recently had a chance to put a few miles on a 2021 Mustang Mach-E4x, thanks to our friends at Bartow Ford in Bartow, Florida. There were a few questions from us E-vehicle neophytes during our little get-to-know session. Questions like, “Is it ‘running’,” or “Do you need to start it?” absorbed the first few minutes of get to know time, and finally, our resident early-adopter, Billy Turpin took this steed by the battery terminals and backed it out of the dealership’s viewing area. We stood in amazement as the car effortlessly moved without so much as a whisper or hint of heat.

The hesitancy of everyone to potentially ball-up Ford’s newest all-electric powerhouse soon subsided as we began to accept the fact this is still a car, albeit an electric one. All the typical buttons and their respective responses are still quite intuitive, the only thing missing was a gas cap. There is however a charging port in its place. Since we only had a few hours with the car and most of our time would be shooting photos, topping of the batteries wasn’t our first concern.

Are You In A Mustang?

Times are changing, and while Ford has spoken numerous times about the pains taken to infuse the Mustang spirit into this new offering, when you’re sitting in the Mach-E, there are few things that draw you back in the saddle to previous versions of Ford’s pony car. There’s no iconic gauge package. Instead, a small mail-slot display give you all the driving info needed for your trip. All but the most rudimentary control inputs are done via the huge, centrally-mounted touch pad, and forget about grabbin’ a gear, unless of course you can shuffle a dial with authority.

There is a pony before you in the leather-wrapped steering wheel, but since this is a first-year offering, there are no anniversary monikers to tie into previous accolades or accomplishments over the years. Understandably, Ford is looking toward Mustang’s future with the Mach-E, not celebrating the brand’s past. Ford recently introduced BlueCruise, for those who would prefer Mach-E do the driving for them.

Another question arose from the “Mach-E4x” designation on the sides of the vehicle. A quick search online let us know that we weren’t alone in trying to decipher the code, apparently, so easily accepted by a younger generation. We learned the “4x” meant all-wheel drive and extended-range capable. Extended range boosts performance by raising the standard range from 68kWh to 88kWh, while all-wheel drive allows the electric motors’ torque to reach the ground at every corner, both benefits of the Premium version of the Mach-E.

Is It Still A Stallion?

Okay, we’ve evolved from adjusting carbs and setting points to a basic understanding of electronic fuel injection. We understand the benefits of better fueling, but how does an ion-based mode of transportation fit into a power-junky’s carbon-based daily drive?

As mentioned, the Mach-E is still a car. It drives just like, or a little better than many of the cars on the road today. There’s no George Jetson skyway to contend with and if you’re proficient with flying around today’s freeways, you shouldn’t have a problem handling a Mach-E. But there are a few interesting details that distinguish an electric car from the rest, battery charging notwithstanding. One of the biggest things to adjust to was the car’s re-generative braking setting. The ability to turn this feature on or off is easily done by choosing a specific driving style and toggling a button on the big control board.

Each driving style has its own characteristics and we noted that “Unbridled” had more braking when not applying throttle and, when regenerative braking was chosen, the difference was even more dramatic. Where an internal-combustion car would simply coast, our Mach-E felt like you were on the brakes, every time you lifted your foot. This was of course, able to turn off, but we simply got used to it soon enough. So, the Mach-E wants to stop more decidedly than your typical, gas-powered Mustang, but how does it want to GO compared to one?

It’s QUICK out the gate!

One thing an internal combustion engine will never have over an equally-sized electric motor is instant torque. With 100% of the electric motor’s available torque at zero RPM, a quick drop of what used to be the loud pedal is now met with silent acceleration- a LOT of it! This wasn’t even the GT version of the Mach-E and it was very spritely from a stand still. The Mustang Mach-E GT offers up 480 horsepower and 600 lb.-ft of torque. If you go further into the steed’s power barn, opting for the GT Performance Edition will toss 634 lb.-ft of torque under your saddle and bring in 0-60 in just 3.5 seconds! Keep in mind, the supercharged 5.2-liter V8 which powers the fastest Mustang Ford has ever built, the 2021 Mustang Shelby GT500 brings 625 lb.-ft of torque.

While the torque specs are quite similar, the electrified Pony has the edge due to the instant torque application, whereas the torque in the Shelby GT500 needs to build up a head of steam – admittedly, it does so VERY quickly. Combined with all-wheel drive and the power-handling capabilities of today’s cars, making use of all that torque has become available to the common commuter.

That is where we feel the Mach-E in all of its variants will shine. Ford has built the largest vehicle charging network of all the OEMs and owners can access the FordPass app on a mobile device or in each vehicle’s on-screen dashboard. Customers will be able to monitor charging at home and easily find and pay for easy, one-stop charging at FordPass Charging Network stations. That said, if you’re heading out on a 1,000-mile trek to the Carlisle Ford Nationals this weekend, while both vehicles could do the trip in comfort, we feel the Shelby GT500, even with an estimated 18 mpg, would make for a less stressful travel without all the anxiety connected to finding a charging port to plug into.

Don’t Fence Me In!

For the time being, we feel internal combustion has a solid hold on the hearts of those set on seeing our nation in all its open-sky glory. For short commutes, such as even between red lights, the all-new, electrified Mustang Mach-E can give its stablemates a good run for their money.

The recent issue with fuel supply in the southeastern states has many giving another look at plugging in as an alternative. While it does bring its own list of concerns, cars such as the Ford Mustang Mach-E do satisfactorily answer the commuting needs of many. In the short time we had behind the wheel of this Mach-E, we can see how it can be a fun-runner for more than just four individuals. Time will tell how commuters and enthusiasts cozy up to the new Pony. We’ll be watching along with the rest of the automotive world, and we’ll be sure to keep you up to date as the newest, most innovative Mustang offering finds its way out of the corral and onto the highways and by-ways of this bold, new world.