A GOOD RUN Where

Were The First Mustangs Built? 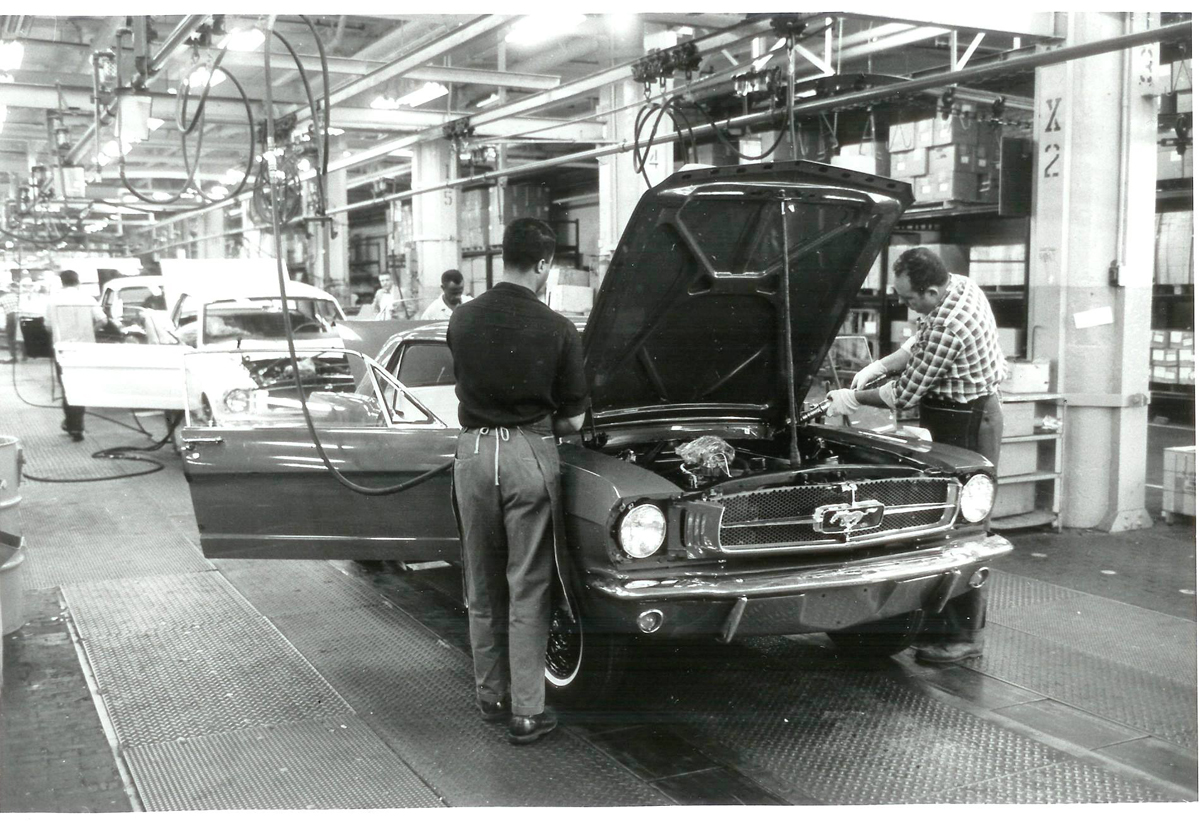 When classic Mustangs were roaring off three assembly lines from coast to coast, it represented one of the most successful production runs in Ford history.

The introduction of Ford Mustang on April 17, 1964 was but a part of the huge manufacturing picture involving product planners, engineering types, bean counters, management, manufacturing people, and a host of other players. It had to have been the fastest Ford ever got a product to market— a scant 18 months. Team Mustang had to move quickly and expect to work around the clock, seven days a week, in order to introduce the car at the 1964 New York World’s Fair in April 1964. In short, tell your wife and kids you will not be home for at least a year and a half.

Months before the introduction, manufacturing people were deeply involved in building engineering units—prototypes—some drivable, some not. Pilot Plant units were bucked and assembled late in 1963 into early 1964. The many engineering departments involved in product development are important parts of a large-scale operation involving dedicated people, committed to doing the best job possible.

The Dearborn Assembly Plant, where Mustangs were bucked and built continuously from January of 1964 until May 2004, was the Mustang’s spiritual home, though other plants have also produced this American icon. Well over six-million Mustangs were produced at Dearborn alone in all that time.

Dearborn shouldered Mustang production at a huge clip of some 70 units an hour during its peak in 1964. This number would also include 1964 Fairlanes, which were produced at Dearborn along with Mustang, until June 15, 1964. Fairlane production was halted at Dearborn and added to Kansas City plant production, which was already building Fairlanes. As Ford began to ramp up Mustang builds at the San Jose, California (Milpitas) plant in mid-July of 1964, 1964 Fairlane production was dropped and added to Kansas City’s workload.

I am pretty convinced mass production began on March 9th with 5FXXX100200 or 100201. We still don’t know at what VIN (Vehicle Identification Number) pre-production unit builds ended. I suspect there were VINs not built between 100181 and 100199. This has never been confirmed because we’ve never found back-to-back units. The highest known, pre-production VIN (vehicle identification number) is 5F08F100173 with a date code of “05C” and export DSO (Domestic or Dealer Special Order) code of “91” located in England. Most pre-production units had Ford DSO code (84 and 89) or export—91-99. A few, including 5F08F100001 and 5F07U100002 were Ford of Canada (DSO 81) units. Virtually none were regular U.S DSO codes.

The earliest known, mass-production unit is 5F07U100211 in North Carolina with a build date code of “09C” and a DSO code of 22—Charlotte. Mass-production units were shipped to U.S. sales districts all over the country to ensure every Ford dealer got at least one Mustang for the April 17th introduction. Export deliveries were hit and miss.

It is important to remember the six-digit, consecutive unit number in the VIN is just an order number or job number. It does not mean how they were positioned on the assembly line. In other words, 100001 is the first vehicle ordered for a given model year and assembly plant. The vehicle order following 100001 would be 100002, 100003, 100004 and so on.

Years back, I heard from a gentleman in South Carolina with 5R09K120001 and a build date of “20H” or 20 August 1964. Most of the stamping and casting dates were mid-August, which confirms Ford’s official 17 August date. Expect to find higher San Jose consecutive unit numbers with early August date codes, such as 5R07K125012 with a date code of “01H” much earlier in August. There were also ’64 ¾ Mustang units with both ’64 ½ and ’65 nuances, such as GEN lights on alternator-equipped ‘65s, short carpeting, and a host of other crossover items. As production cars, no one really cared. Ford’s goal was to get them out the door—quickly.

It is important to remember the six-digit, consecutive unit number in the VIN is just an order number or job number. It does not mean how they were positioned on the assembly line. In other words, 100001 is the first vehicle ordered for a given model year and assembly plant. The vehicle order following 100001 would be 100002, 100003, 100004 and so on. Units weren’t always in numerical order on the line. The line-up office got the order and scheduled that order number for assembly. How units were scheduled for building remains a mystery. However—a lot depended upon the plant having all of the components necessary to complete the build. If you ordered a 289 High-Performance Mustang and there weren’t engines in the supply line, you as a customer waited. Bodies were also pulled from the line for repairs or modifications and placed back on the line.

DSO codes changed beginning January 1, 1966, with some sales districts being eliminated as well as changes to district sales office codes. Washington, D.C. as one example, went from being DSO 26 to DSO 17. The Ford of Canada DSO of 81 went to being individual Canadian sales districts, for example B1 for Central Canada, B2 meaning Eastern Canada, and so on. There would be more changes to DSO codes in the years to follow as Ford consolidated sales districts.

Pre-Production Mustangs didn’t end with 1964 ½ units. If you own a 1967-69 Mustang with a scheduled build date code of “04G,” this doesn’t mean your Mustang was bucked and assembled on July 4th. It means you have a pre-production unit—which is basically a verification unit to confirm quality. Pre-production “04G” units were often show cars and airport/shopping mall turntable units. Most were DSO 84 (Home Office Reserve) and 89 (Transportation Services) units. Some had leaded seams and other forms of show car treatment. They were routed through Ford’s dealer network and sold upon the termination of their use as promotional units.

Did you know you can order your 1967-2017 Mustang’s original production and order information from Marti Auto Works? Marti Auto Works is the privileged licensee (contract #5012) to Ford Motor Company's entire production database for the 1967-2017 model years, which is great news for Ford, Lincoln, and Mercury enthusiasts. The Marti Report can tell you anything and everything about any Ford, Lincoln, or Mercury vehicle built in the United States or Canada from 1967-2017. What color was your vehicle? Easy to answer. What about axle ratio? Done. Even the date your Mustang or other Ford vehicle was ordered, serialized, and sold. It’s all there in the coveted Marti Report and at a price nearly anyone can afford.

Marti Reports are delivered as a PDF by email. You will need a PDF reader to be able to view and print the report and you can download the Adobe Reader for free. If you require a hard copy to be mailed to you as well, be sure to select the Print Service option.

Please understand—the Marti Report is not a substitute for an in-person evaluation of a vehicle. It is a Ford vehicle data report for a particular vehicle’s identification number. For more information go to their website. You may also call Marti Auto Works at 623-935-2558.