Behind the wheel of the all-electric 2021 Mustang Mach-E 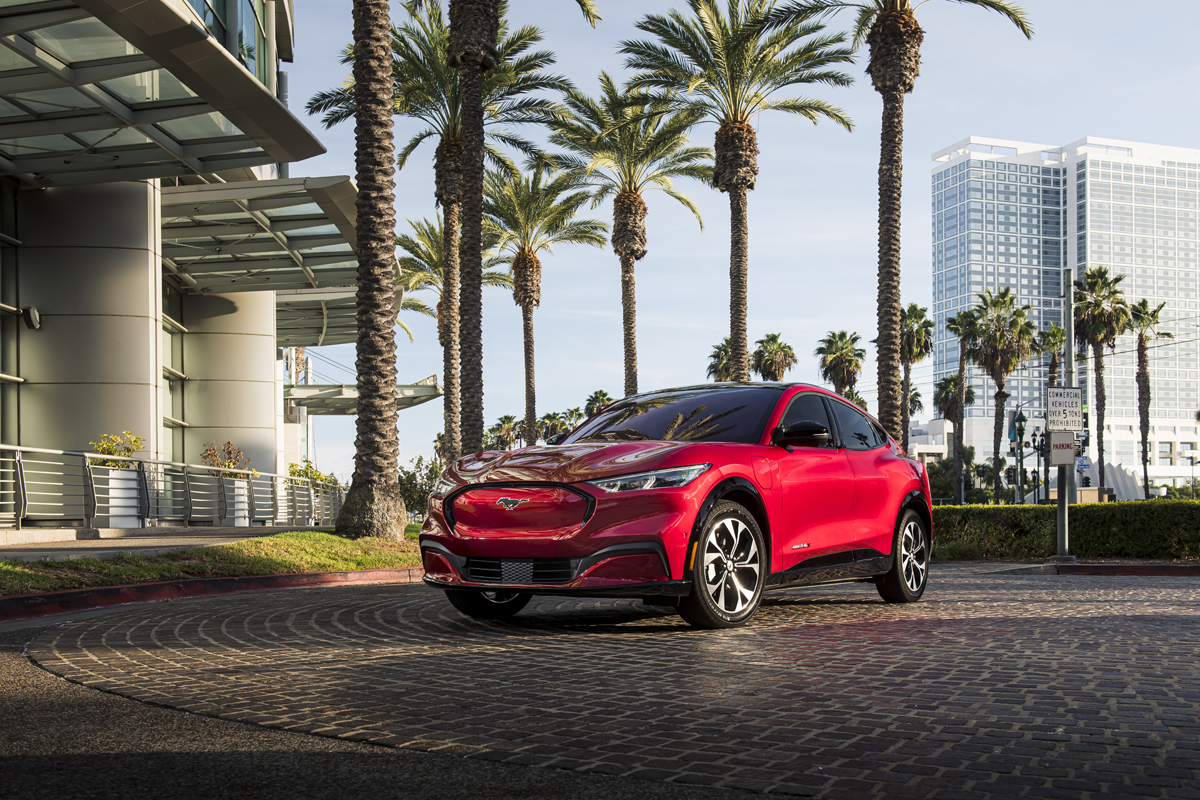 While these photos were taken in sunny California, my drive in the 2021 Mustang Mach-E took place in snowy Michigan. That didn’t change the fact that Ford’s first full-fledged battery-electric vehicle fuses fun and function in a cutting-edge package.

Slipping a smartphone into my jacket pocket, I hustle through the brisk Michigan air as snowflakes float down on the scene at the American Center for Mobility, a connected mobility testing facility in Ypsilanti, Michigan.

Once the onboard computer recognized the phone, the vehicle illuminates and the door unlocks and opens as I push the button. It seems like yesterday, but it was almost exactly a year that I first met the 2021 Mustang Mach E.

When I learned along with the world that Ford was putting the Mustang badge on an SUV that just happened to be its first pure battery-electric vehicle, I like many, was skeptical. The idea of a Mustang is familiar and the change was jarring. However, the technology built into the car was undeniable, and after a brief ride on the street and through a mini autocross, I left with more curiosity than skepticism.

While many will never come to grips with the people-mover form factor of the Mustang Mach-E, it won’t be because Ford engineers didn’t strive to imbue this cutting-edge machine with the soul of its storied pony car.

“...We brought Mustang to this, which means we brought emotion to electric cars,” Darren Palmer, Global Product Development Director for Battery Electric Vehicle, explained. So that’s what we mean by that. We don’t mean this is a Mustang coupe. A Mustang coupe is fine. They’re different. They both exist, but we brought emotion to the Mach-E. We wanted to have warmth inside, human emotion, love and warmth. And that's what we’ve worked to do with the team.”

Sliding into the cabin of the Mach-E is both familiar and foreign. Immediately the electrified pony on the steering wheel says this is home, but the upright seating and big-screen technology signal that this is definitely not your parents’ pony car. A push of a button and the Mach E comes alive like a computer arising from its sleep mode. Spin the same shift dial found in the Shelby GT500 to drive and it’s time to move out.

Configured with a trio of drive modes to tailor the Mach-E‘s personality for its intended use, our tester defaulted to Whisper mode with One-Pedal Drive. The former dials in easier steering, muted acceleration, and reduced powertrain emulation sound, while the latter is just as it is described, letting drivers control both acceleration and deceleration with the big pedal on the right. When you let off the accelerator, the brakes engage automatically and start capturing that energy to recharge the batteries.

the latest pony has the makings of something that just might attract a whole new group of drivers to the stable.

Even during a quick spin en route to the autocross course, the one-pedal arrangement, which is the preferred mode of EV fans, proved quite intuitive, and that translated to the road course. There, I drove a rear-wheel drive Mach-E with the small battery, which puts down a modest 266 horsepower and 317 lb-ft of torque and zips from 0-60 in 5.8 seconds. This configuration acquitted itself amazingly well.

Toggled in Unbridled mode for maximum performance and sound, the Mach-E exhibited impressive balance thanks to the low center of gravity that EVs enjoy, which Ford paired with its best suspension tuning across the entire Mach-E lineup. After a quick warm-up lap to get the lay of the land, I put down a more aggressive lap. The steering and power were both responsive, and the SUV proved far more agile than anticipated.

Moreover, the idea of the utility form factor fades away as it darts through the cones and effortlessly plants the power, even on a wet surface. Better yet, running this course in One-Pedal Drive, you can still use the brake pedal, but the automatic braking starts before your foot can switch pedals, so it anticipates your need, which hastens the transition back to the throttle.

“The balance plus the control you get to the wheels with the electric system, you can control it much more precisely than gas how instantly the torque comes in...” Palmer enthused. “You can do anything you want to flatter the driver and still keep that balance.”

Though your scribe was able to sneak in one more hot lap and push a bit harder to finally get the front of the car to plow a bit in the slalom, which was easy to recover from by commanding more power at the rear, the runs were over and it was time to learn a bit more about the car before hitting the snowy streets.

Cold, wet Michigan pavement provided a chance to experience the Mach-E in the real world and toggle through the various drive modes. A year ago, I felt like the piped-in powertrain sound actually enhanced the driving experience. It exudes a performance vibe but doesn’t attempt to mimic an internal combustion rumble. I just wanted it a bit louder and shared my thoughts that a true Mustang needed more aggression with the engineers.

“So, since we talked with you, we ramped up the Unbridled, how much it reacts. We ramped up how it modifies the systems of the car, and we ramped up the sound,” Palmer shared. “People loved the sound. We pushed it higher than we originally had because it goes quieter in Whisper and you can control it. So, we ramped those things up. And we also thought about, as we were tuning in the handling, should we put the stiffer suspension system just on the top cars or just the GT.”

The answer was no. Along with the amplified sound in Unbridled, they put the stiffer suspension on all the Mach-Es. As they say, if it’s too loud, you are too old, so if you don’t like the amped-up Unbridled soundtrack, I will take the blame, but I think you will dig it. Moving from Whisper to Engage to Unbridled on the back roads of the Wolverine State showed a perceptible difference in behavior and performance, just as moving from Normal to Sport to Track does in a gas-powered pony.
‍

Of course, Unbridled quickly became the default setting for my sporting Sunday drive. It tunes up the steering precision, heightens the throttle response, and even offers a downshifting feel in decel. Even on the slushy surface, traction was never an issue, unless you wanted to intentionally kick the tail out by stabbing the throttle mid-turn, and even then, the Mach-E gathers composure instantly  The version I wheeled on the street featured all-wheel-drive and the long-range battery. It uses a big motor out back and a small motor in front to generate 346 horsepower and 428 lb-ft of torque which thrusts it from 0-60 in just 4.8 seconds. While I never turned off all the electronic stability controls, it easily put the power down in Unbridled mode, even from a standing start.
‍

The fleeting experience left your scribe daydreaming about what the forthcoming Mach-E GT, which has nearly double the output of the car I wheeled on the autocross, might be capable of delivering. Hauling over hills and whipping around corners in the Mach-E put a grin on my face the whole time. It was great fun driving this cutting-edge machine.

Granted I enjoy the cutting edge, but even if you can’t get over the form factor of the 2021 Mustang Mach-E, you have to appreciate the technology it brings to the brand. With all probability it is harbinger of things to come for the traditional Mustang, but if the naming really bothers you, you can simply stick with saying ‘Mach-E’ because based on this first experience, the latest pony has the makings of something that just might attract a whole new group of drivers to the stable.