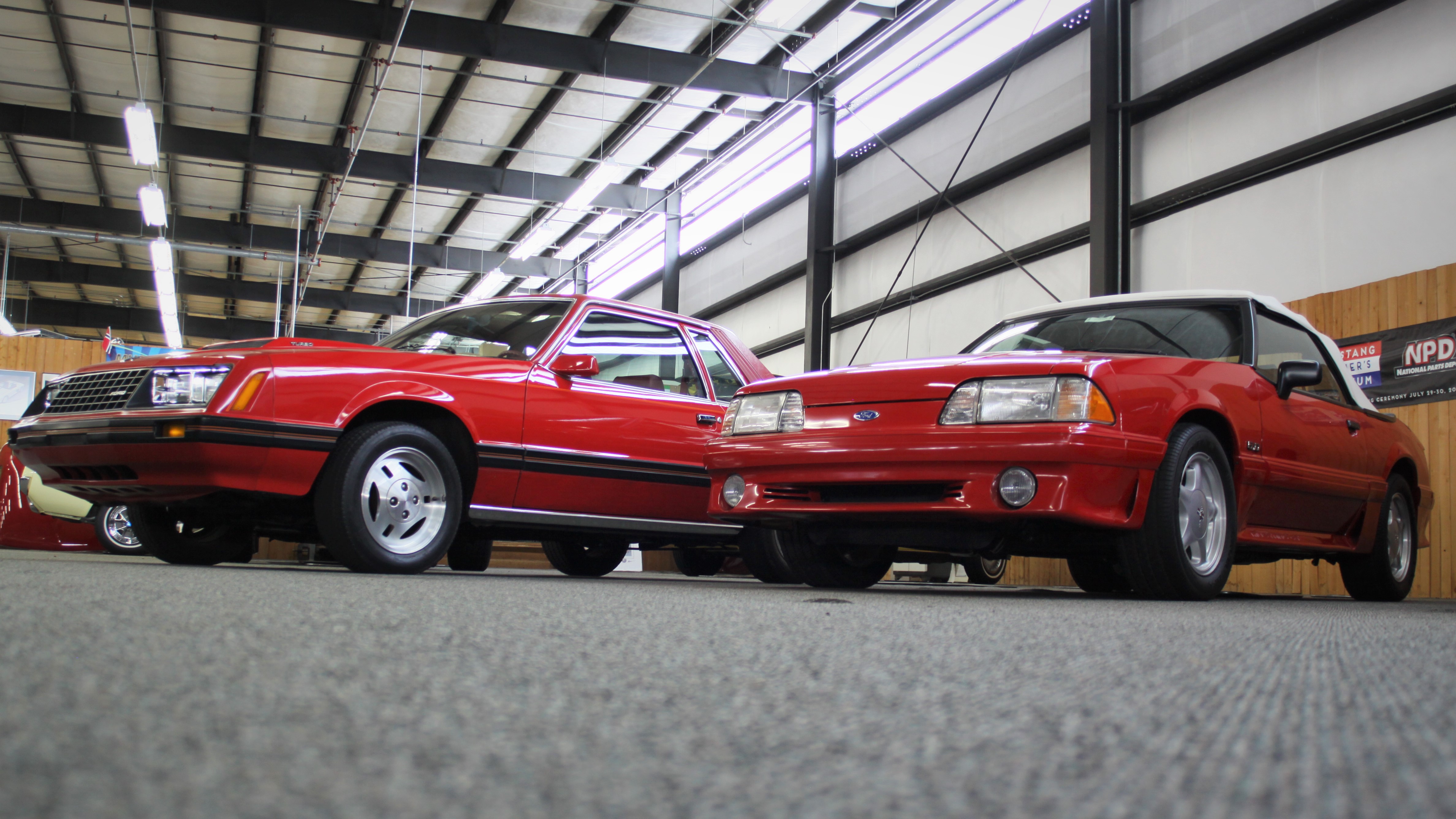 Automobile production is a constantly evolving thing. Whether out of necessity, regulations, or technological advancements, improvements are made each year, designed to make next year’s model better than the one before it. How else would you get customers to trade-in their aging cars for bright and shiny new ones?

Sometimes the improvements are almost imperceptible, but in the case of these two fox body Mustangs housed in the National Parts Depot collection in Ocala, Florida, the differences are like night and day! The reason for the blatant differences between the two cars is largely due to the span of production years that separate them. The first fox body Mustang rolled off Ford’s production lines as the all-new-for-1979 model. The last fox emptied all the parts bins along the assembly line over a decade later in 1993, when Ford re-tooled for the next-generation (SN95) Mustang.

The automotive climate was much different when the fox body Mustang was introduced, and it was even MUCH more ominous way back when Ford’s engineers and designers were envisioning what would please its customers and government officials in the future. As all the auto manufacturers were clawing their way through new regulations, each one diligently searching for ways to find performance with economy, new technologies were budding over the horizon. A few had germinated enough to find their way under the hood of “the first fox body” Mustang.

As Rick Schmidt, Vice-President and Chief Financial Officer of National Parts Depot attests in the accompanying video, calling this car “the first” is a bit of a misnomer, as the car most certainly wears the “VIN # 001” designation, but it isn’t actually the first fox body produced. While fox body production began in August of 1978, this car didn’t roll down the line until October of that year. You can check out Jim Smart’s story about early Mustang production to get a better idea how VIN designations work, but in this car’s case, the numerous options it wears may have been the reason for the car’s delay.

This four-eyed beauty got so many check boxes filled that its window sticker required two pages! Among those options were those “plush” leather seats and a pop-up sunroof jutting from that Ghia-inspired, red vinyl top. The Ghia nameplate began in the Mustang II era and would stick around until 1981 during fox body production. Another upgrade that also falls under the “finding horsepower under any rock,” would be the addition of the turbocharger to the carbureted, 2.8L four-cylinder mill.

While today, there is a fair amount of nostalgia while peering under the hood of the last fox body to roll down the line, it is also very obvious how far the generation had advanced during those years.

Boosting engines is a common occurrence today, but when you consider the times, this little Mustang was forging new territory every time those impellers would spool up. Whenever they did, their efforts carried the little four-cylinder’s horsepower from the naturally-aspirated 88 ponies, to a somewhat muscular for the times, 132 horses. Keep in mind, that’s only eight less than the V-8 variant found under the hood of the full-boogie version of this car and MORE than the V-8 offered the very next year! Ford later perfected the small engine’s performance in 1984, for the SVO variants (1984-1986) which carried horsepower numbers of around 200, depending on year.

Adding the turbo also served to teach Ford’s engineers about heat dissipation, as the top-mounted turbo inflicted additional strain on nearby components. A quick-fix was to add shielding and insulation to prevent the heat transfer.

Being the very first “official” fox lifts this car above many of the other cars produced that year and it makes sense that it would have a special place wherever it goes. Ford felt that was as well, filling out the necessary paperwork so that a Ford enthusiast named Floyd Moore, of Glenview, Illinois would take ownership of the car, his son driving the car for approximately one year before it took residence in his collection. The car currently shows just over 15,000 miles and still wears the original tires!

The History Of Moving Ahead

While today, there is a fair amount of nostalgia while peering under the hood of the last fox body to roll down the line, it is also very obvious how far the generation had advanced during those years. First and foremost, a mile-mizer fuel-injection system had settled under Mustang’s hood, starting with the automatic-equipped cars in 1984. The all-new EFI carried 165 horses on its back, still less than the carb’d-and-turbo’d four-cylinder that year. The Mustang GT still sipped fuel through a carb through 1985 production, but the entire Mustang line would commit to multi-port fuel injection going forward from 1986.
‍

Try to imagine how it must have felt sliding out of the interior of an early fox body and into the luxurious confines of this later-production model. While airbags resided on every model out the door by now, the driver could also control various parts of the car (besides the horn) without ever removing their hands from the steering wheel! The ever-popular 8-track had given way to cassettes, and CDs were even an option for the last year fox body Mustang.

The fox body Mustangs have become the darling of enthusiasts both young and old. They were the right car, at the right time, helping to carry Ford out from the performance slump that many auto makers were enduring. They were the precursor to the modern-day muscle car, and by the time the sun set on the generation, it had established quite the reputation as a runner.

As Ford engineers were honing their pencils and commanding more EPA-friendly performance from every engine they produced, they helped carry technologies that afford us the unprecedented power and drivability we enjoy at the wheel of today’s modern Mustangs. Rather than yawn at horsepower numbers easily eclipsed by today’s offerings, we would do well to understand the cars of this era, and the confines in which they were created. It’s in those moments when we can appreciate how great these little cars actually are, and these two fine examples highlight that fact perfectly!