By the Mustang Driver Staff 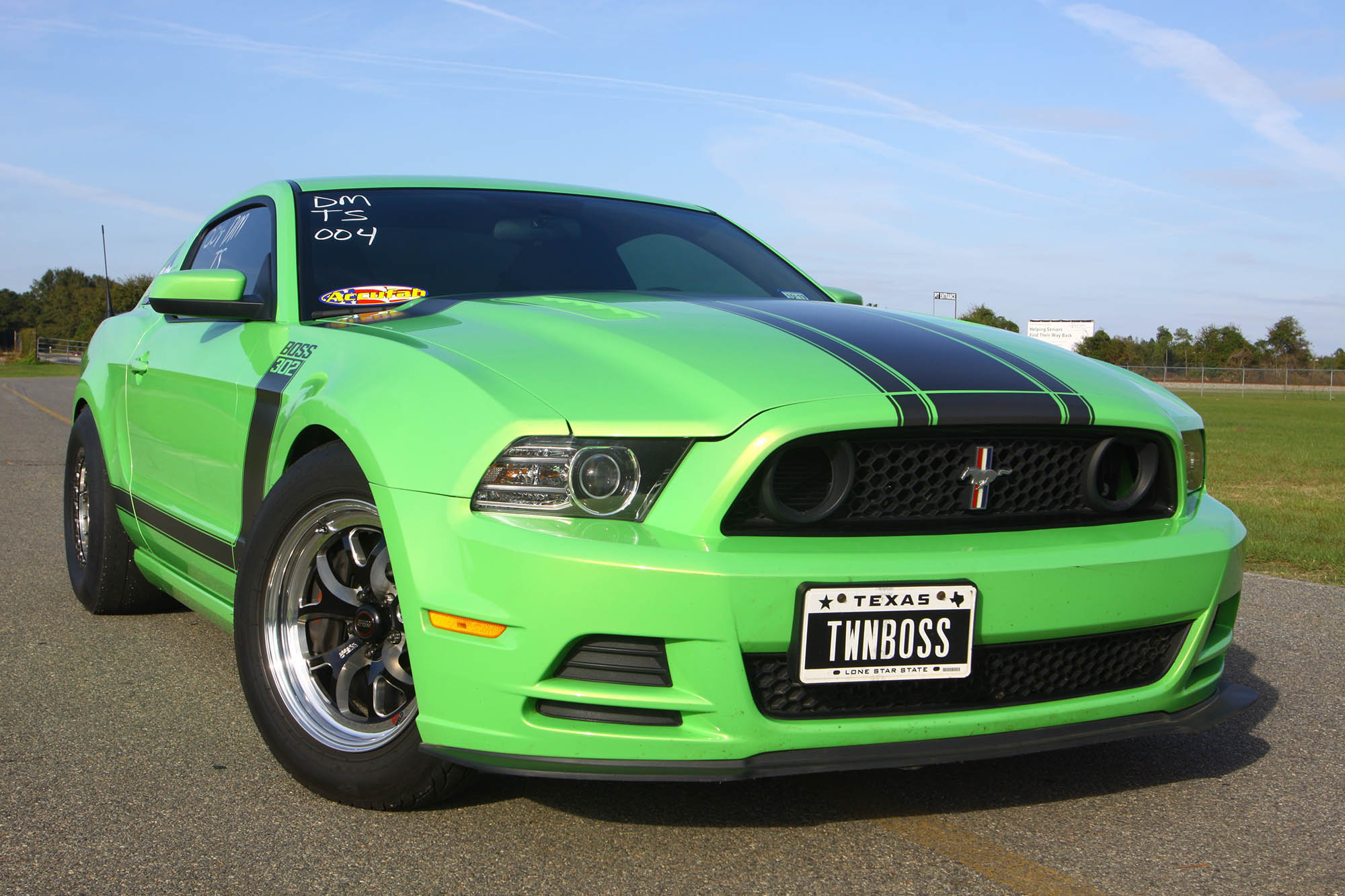 The State of Texas is known for many things. It’s the second-largest state after Alaska, with a mix of landscapes, depending on the location within its tremendous expanse. Its residents are known for being tough with a sense of pride perhaps unmatched by citizens of other states. Because of its sheer size, Texans are also known for exercising their love of speed on the state’s many open roads. Texas is known for its fast cars.

For Weatherford, Texas’ Jeff Humphrey, speed is not just a Texas thing, it’s a family thing. The need for speed also runs through the veins of Jeff’s little brother Justin, and many of their closest friends. When they go to the track, it’s never just one or two people, it’s usually Jeff’s family, Justin’s family, and a couple of other carloads of friends also racing their cars.

In this instance though, Jeff’s 2013 Boss 302 is the star of the show. Jeff’s wife Jammie found the car for him in September 2014 at a dealership in Dallas, Texas. It was stock upon purchase and followed up other numerous Mustangs Jeff had owned. Like many others, when Ford introduced Gotta Have It Green for the 2013 model year, Jeff was one of many enthusiasts who put it on their “Gotta Have It” list of future Mustangs. He saw a Gotta Have It Green example while attending the 2013 NMRA World Finals race in Bowling Green, Kentucky. “I was sold,” he said.

As most know, the Boss 302‘s Roadrunner engine was plenty stout and rated at 444 horsepower from the factory. The Roadrunner engine featured a forged bottom end, CNC-ported heads, redesigned camshaft profiles, and a revised intake runner design. Plus, the car weighed in around 3,500-3,600 pounds, with 19-inch wheels, a more performance-oriented suspension, Brembo brakes, and a track-specific calibration.

Jeff’s wife Jammie found the car for him in September 2014 at a dealership in Dallas, Texas. It was stock upon purchase and followed up other numerous Mustangs Jeff had owned. Like many others, when Ford introduced Gotta Have It Green for the 2013 model year, Jeff was one of many enthusiasts who put it on their “Gotta Have It” list of future Mustangs.

Therefore, to even the most hardcore Mustang enthusiast, stepping into a Boss 302 is a performance upgrade.

Jeff enjoyed the car in stock form for roughly a year before digging into it so he was pretty happy with the car as-is. Little brother Justin, who is well-versed in many things mechanical, jumped in with both feet – or should we say both turbos – with an On3 Performance twin-turbocharger kit. However, Jeff and Justin ordered the On3 kit without turbochargers so they could add Precision 62/66 units.  As we mentioned, the Boss’ Roadrunner engine comes ready for a power adder, but just to make sure it was truly ready, the engine was treated to oil pump gears and the fuel system was brought up to power adder spec via a Fore Innovations fuel system paired with ID800 fuel injectors.

With the Boss’ power adder aspect all worked out, Jeff and Justin set about getting the chassis and suspension up to speed. BMR Suspension was sourced throughout combined with Vi-king shocks and struts. From BMR the car was treated to upper and lower control arms, subframe connectors, drag springs, anti-roll bar, and a driveshaft safety loop. To round out the suspension and chassis upgrades, Jeff chose Weld Racing S76 wheels both front and rear. Up front, the Boss wears 17x4 examples and out back, 15x10s. For traction, Jeff relies on Hoosier Quick Time Pros to get him out of the hole while Mickey Thompson Sportsman SR 28x6R17LT radials keep the front up.

Lastly, the remaining piece to the puzzle needing replacement was the car’s transmission, but no, the factory Getrag MT-82 wasn’t swapped out for a ‘Glide, or a C4, or a 4R70W. Jeff kept the Boss’ man pedal by adding a Tremec T56 Magnum paired with a McLeod RXT1200 clutch.

With a stick still in the car, Jeff can compete in a variety of drag racing classes, but he maintains the Boss drives like a stock car on the street. However at the track, Jeff says it’s, “full send.” With the Boss’ new track calibration rating at a hair over 1,000 horsepower to the wheels, the car has run a best of 9.65 at 145 mph, with a 1.37 short time.