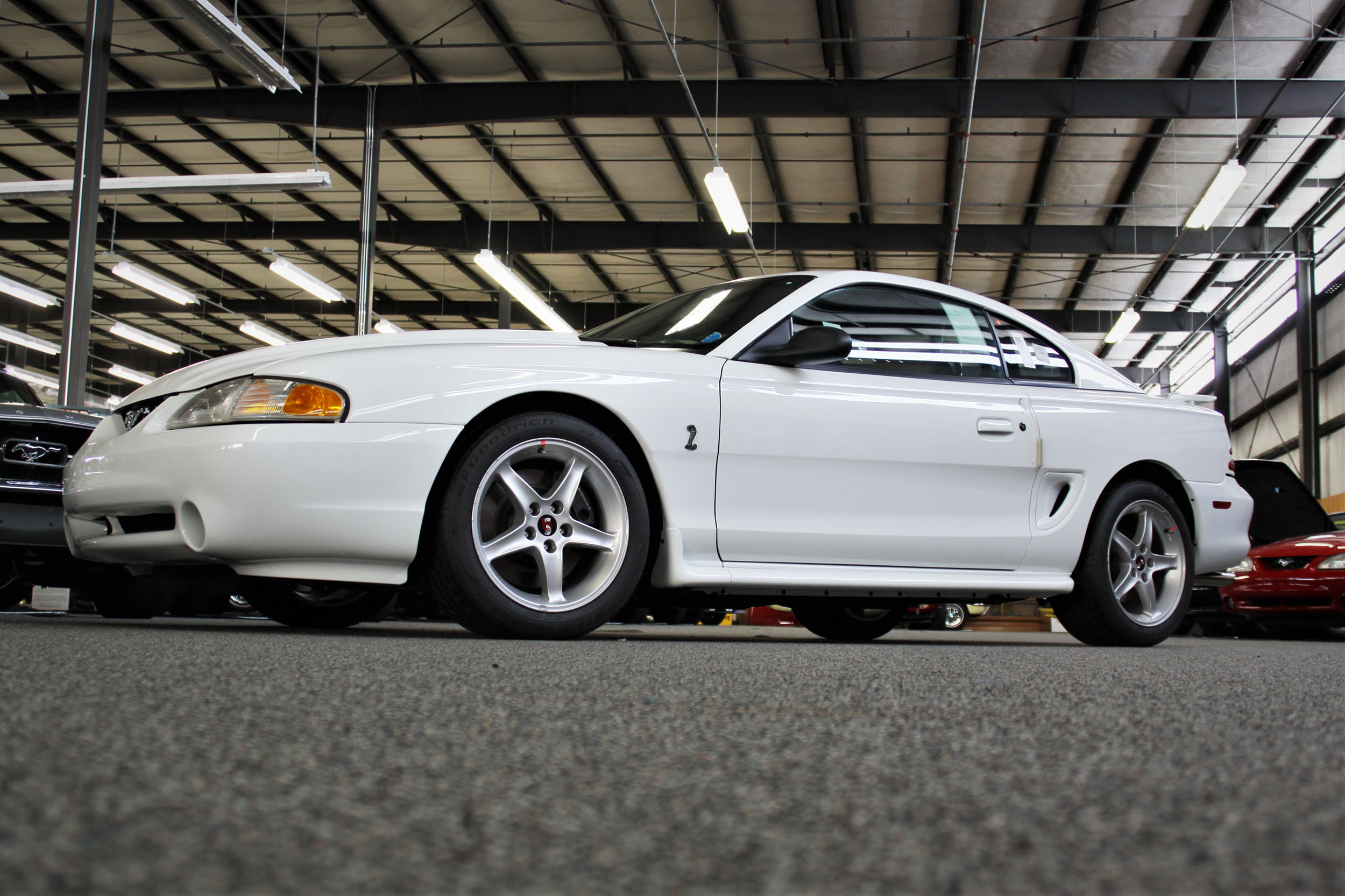 If you ever visit the vast National Parts Depot facilities in Ocala, Florida, you’ll be easily awestruck at the expansive collection of cars and trucks under one roof.

‍NPD uses the vehicles to certify many of their offerings through their catalogs, but while any low-mileage example would be sufficient, Rick Schmidt (President of NPD) has chosen to seek out significant examples when possible. Rather than simply cover the first and last year of Fox body production, the NPD collection houses THE first and last Fox bodies produced! We highlighted these cars in a story a few months ago.

This car, while draped in a very-vanilla shade of Crystal White, is significant due to what resides under all that shiny stuff on the surface. This car is one of the 250 Cobra R Mustangs built in 1995 by Ford’s Special Vehicles Team. Ford’s SVT group had been turning out Cobra Mustangs (and even Cobra Rs) since 1993. The car was intended to up the pony car’s performance beyond the typical GT, and then utilized a few additional go-fast parts to bridge the gap. The variant that would appear only two years after would be more of the same, only more so.

The Cobra nameplate would return in 1994, but would not receive the all-powerful “R” designation until one year later. In 1995, SVT folks decided there really was no replacement for displacement and shoehorned a 5.8L (351 Windsor) into the engine compartment of that year’s Cobra R. Unlike the previous version, the SN95 Cobra R was only available in one shade – Crystal White.

What the car lacked in show, it more than made up for in go. To start, was the 351 cubes that now resided within, thanks to the bigger Windsor’s 3.5-inch stroke crankshaft. While originally pulled from Ford’s Lighting sport truck line, the Cobra R’s tall-deck variant had several upgrades. Higher compression (9.2:1 versus 8.8), better breathing, and a more aggressive camshaft boosted output from 240 horsepower and 340 pound-feet of torque in the Lightning, to 300 horsepower and 365 pound-feet of torque.
‍

Other upgrades included a beefier Tremec 5-speed replaced the Borg Warner unit used in the mere mortal Mustangs and the R-model’s suspension was super-tuned for track duty with heavier front and rear sway bars and adjustable Koni shock absorbers front and rear. Serpent-adorned wheels wrapped around 255/45ZR-17 BF Goodrich COMP T/A tires. Springs were upgraded both front and rear and there was now a tower brace that helped keep the suspension true when running the car at ten-tenths.

The Cobra nameplate would return in 1994, but would not receive the all-powerful “R” designation until one year later. In 1995, SVT folks decided there really was no replacement for displacement and shoehorned a 5.8L (351 Windsor) into the engine compartment of that year’s Cobra R. Unlike the previous version, the SN95 Cobra R was only available in one shade – Crystal White.

Even though the Cobra Rs had dual air bags and were emissions compliant, the rest of the package was built to go fast. Which is exactly what the folks at Ford and its SVT variant intended you to do with this monster. To be one of the few who could corral this steed, you needed to prove your mettle by sending your racing pedigree and informing them you intended to exercise the car in various IMSA, SCCA, NHRA, or IHRA events. It didn’t take long for enthusiasts to learn the code to get on the list for a Cobra R as all 250 units were spoken for in a mere five days after ordering opened up. Obviously, not all 250 cars found their way onto the tracks of North America. This one in the NPD collection shows only 90 miles on the odometer, and we’d bet that none of them were ever made in angst.

As we mentioned earlier, the cars in NPD’s collection are more valuable as examples of correctness than they are as transportation, so chances of this car’s odometer seeing daily usage are quite doubtful. But as a pristine example of what a bunch of Ford’s enthusiastic engineers could dream up, it will forever serve as a shining milestone in the storied history of Mustang vs. the world.