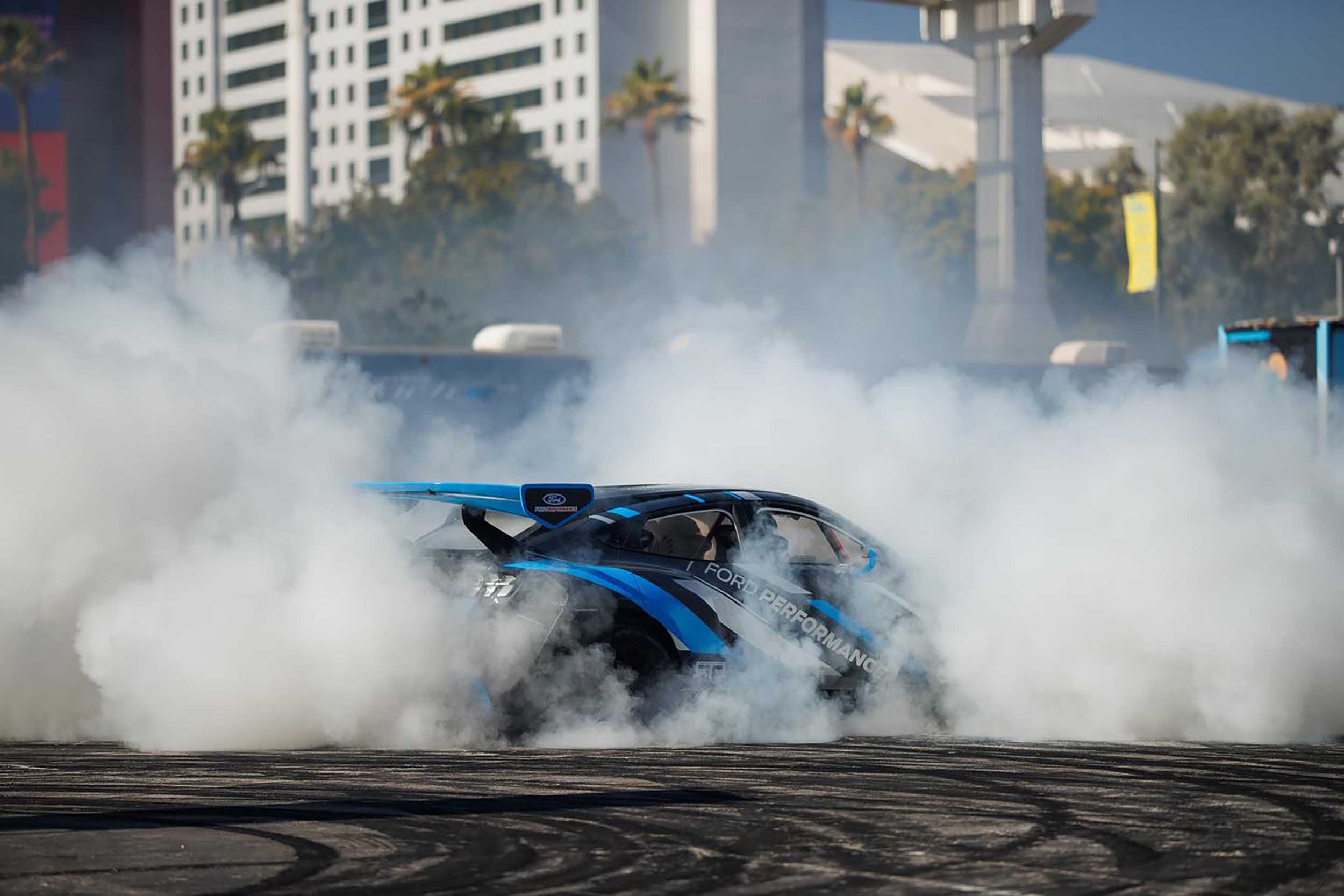 From racing its Cobra Jet cousin, to drifting around the Faroe Islands, the Ford Performance Mustang Mach-E 1400 is on a mission to show that electric cars can be cool. Built in the RTR Vehicles’ lab and driven by the Fun-Haver himself, Vaughn Gittin Jr., this ride’s performance is definitely enough to earn respect from even the most ardent internal-combustion enthusiast.

“Getting behind the wheel of this car has completely changed my perspective on what power and torque can be,” Vaughn Gittin Jr. said when this car was revealed. “This experience is like nothing you’ve ever imagined, except for maybe a magnetic roller coaster.

Seeing it in action on video or from afar definitely makes you wonder what it might be like. With 1,400 peak horsepower delivered by seven onboard motors and a powertrain which can transition from all-wheel-drive on the track to two-wheel-drive in a drift, this four-door tire-shredder is a tantalizing performance proposition.

Speaking of propositions, this writer received an offer that you just can’t refuse during the SEMA Show in Las Vegas, Nevada. “Fancy a ride in the Mustang Mach-E 1400 demonstrator with Vaughn Gittin Jr. at SEMA?”

As a matter of fact, I did. Since the moment I saw this car (and the Cobra Jet 1400 drag car) they have been on my ride-along bucket list.

With a late-afternoon appointment scheduled, I made certain to be on time. After signing my life away, it was time to line up in the queue. Vaughn and his Formula Drift driver Chelsea Denofa were busy all week at the Ford Out Front display, shredding tires and giving rides in their Mustang RTR demonstrators. A select few scored one of the three passenger seats in the Mach-E 1400.

After a short wait, it was time to slip on a helmet and pour myself into a racing seat. The support team helped with the five-point harness as I assumed my spot behind Vaughn in the left rear seat. Knowing that there were Mustang loyalists onboard, the Fun-Haver promised to make the ride a good one — as if any ride with him wouldn’t be a blast. However, this one was special.

Once the passengers were secure, Vaughn wasted no time blasting out on the open pavement that served as his Sin City playground. Shortly after we rocketed forward, the Mach-E 1400’s rear snapped around and the car came to a sudden halt. This wasn’t the end of the ride, however, as we had just begun. Instead, it was the point when the roller coaster slowly ratchets to the stop before descending at full speed. This stop was intentional. Vaughn wanted us to feel the full fury of the Mach-E 1400. Imagine, if you can, having 2,000 lb-ft of torque on a light switch and the traction to apply it to the pavement.

After a moment’s pause, he drops the hammer. The Mach-E 1400 effortlessly leaps forward, plastering my helmet firmly into the race seat. I have never been in a fighter jet or a rocket into space, but I can only imagine it might feel a bit like this. In a moment, Vaughn is flicking the drift stick and getting us slideways. Another lap and we stop again. It’s time for one last straight-line blast and the grin on my face is so big that I must look insane.

Snapping instantly to speed, the electric pony effortlessly shredded tires. The intentional gear whine of its powertrain offered an auditory counterbalance to the plaintive wails of the Nitto rubber offered for sacrifice to the gods of performance. The Mach-E 1400 glided around a sphere of shredded tires at the center of the display.

We pause briefly, letting the smoke clear. Accelerating again, the Mach-E 1400 flexes its torquey muscles. Vaughn sets up more slideways action as the brief ride winds down. Before it was over, the finishing move was the ‘washing machine,’ as Vaughn locked the wheel and did several rapid-fire donuts before rolling into the pits and dropping off his shaken and stirred passengers.

”I’m telling you, dude,” Vaughn enthused about electric performance after my ride. “It changed my life.”

That comes from a man who has seen some incredible performance machines — from a 760-horsepower Ultra4 Bronco to his 1,200-horsepower Formula Drift Mustang RTR — so if you are an EV skeptic, you might want to consider what is possible from a max-effort performance version. It is truly impressive.