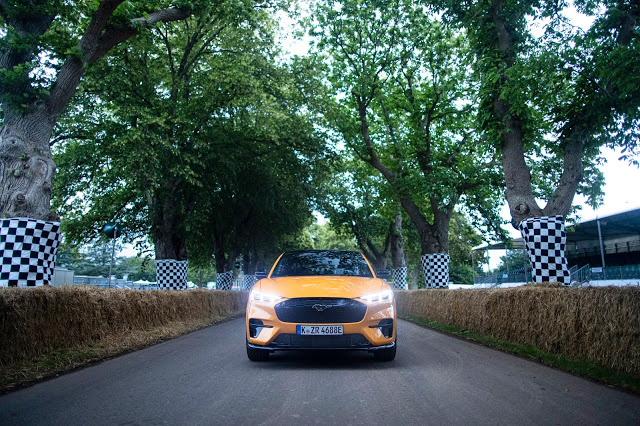 Ford brought an electrified lineup to the historic Goodwood estate. While the racier machines — like the hybrid Puma Rally1 car prototype and Mustang Mach-E 1400 — garnered much of the glory, Ford also wanted to show what its production machines could do.

Of course, the company timed the opening of the Mustang Mach-E GT order banks in Europe with the Goodwood Festival of Speed to help get the word out.

“Mustang Mach-E GT demonstrates the true potential for all-electric powertrains to dial up the fun-to-drive experience,” Geert van Noyen, manager, Vehicle Dynamics, Ford of Europe, said. “This is a refined, premium specification five-seater SUV with the acceleration of a super-car and zero tailpipe emissions — a combination that was the stuff of dreams when I started my career as a car engineer 30 years ago.”

To show what this dream machine can do, the company entered the Mach-E GT into the timed shootout, which attracts a stunning lineup of supercars and racing machines. In this deep water, the production Mustang Mach-E GT acquitted itself quite nicely, running a 61.91-second run with driver Paul Swift behind the wheel. This was enough to earn the 24th quickest time, and log the Mach-E GT as the swiftest production machine to ascend the historic hill.