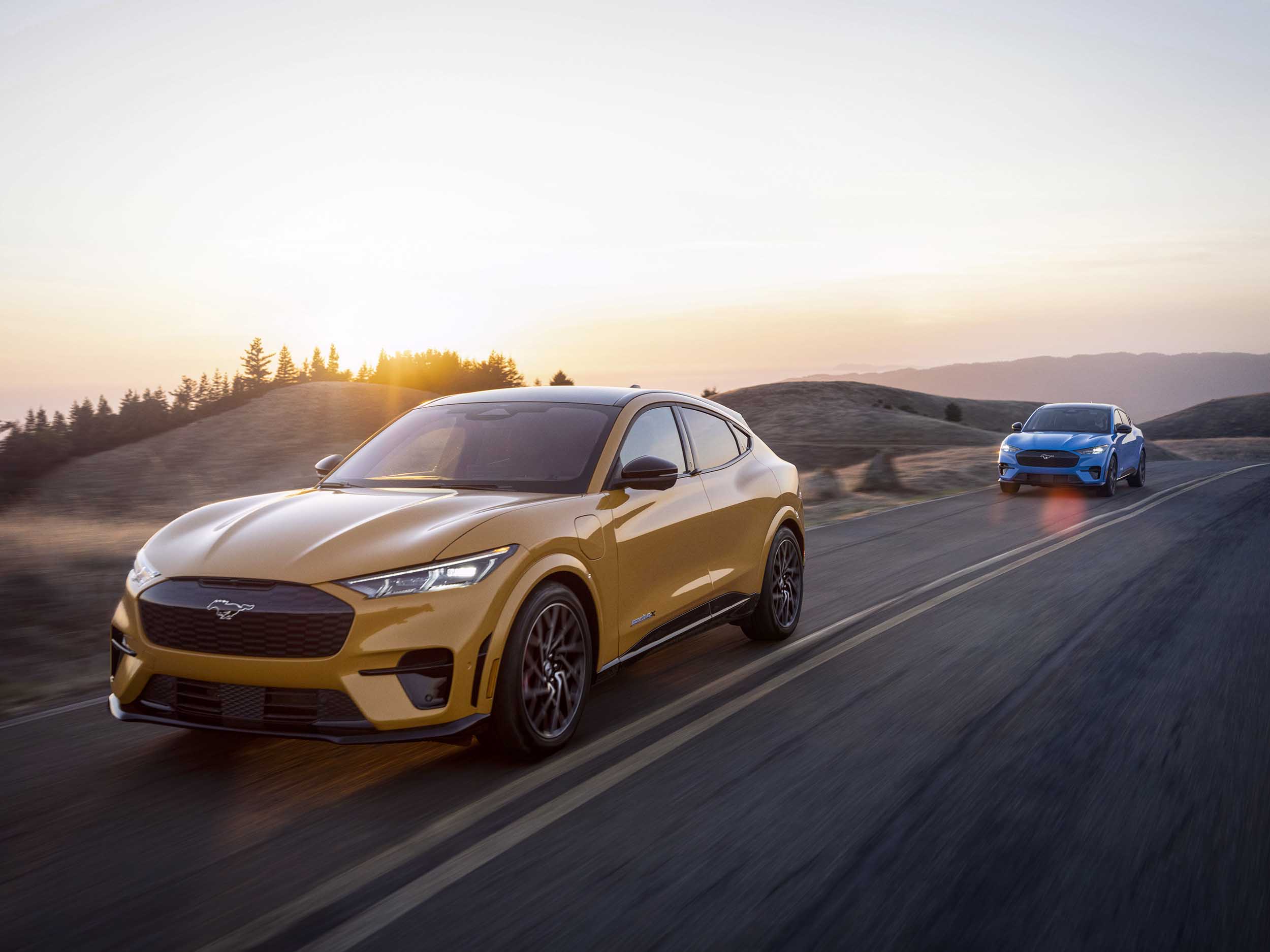 At the first sign of a straight empty slab of asphalt, I stab the accelerator pedal to the floorboard. My head snaps back as more than 600 lb-ft of torque instantly thrusts man and machine effortlessly forward.

“We’re electrifying our most popular nameplates and already have pushed the envelope by creating an electric vehicle worthy of wearing the pony badge. It’s only natural we continue to push further,” Ford’s Global Director of Battery Electric Vehicles Darren Palmer enthused. “The Mustang Mach-E GT and GT Performance Edition are bringing high-performance credentials at a price customers will love.”

If you doubted an electric four-door SUV deserved to wear a Mustang badge before now, this version might be the one to convince you otherwise. With effortless off-the-line acceleration approaching that of the modern Shelby GT500 and handling that is sharpened to take advantage of its ample propulsion, the Mach-E GT is a legitimate performance pony.

“We have certain criteria we need to meet. Of course, so we started development in the simulator. I personally have been in the simulator, many, many times,” Vehicle Dynamics Supervisor Hether Fedullo said. “My team and I have spent hours and days and weeks in there, making sure that we could understand the hardware that was needed and the development time that would be needed to create something worthy of being a GT.”

Wanting to climb up the performance ladder, this writer began a stint in the curvy California roads above Sausalito behind the wheel of the Mustang Mach-E GT in its base configuration. Sporting 480 horsepower and 600 lb-ft of torque, the GT proved nearly as fun in the corners as it did in full-power, straight-line sprints.

The handling was sharper, courtesy of springs which lower the center of gravity by 10mm and tighten its demeanor by as much as 30 percent. The GT receives completely new chassis tuning, including stiffer dampers, sway bars, and jounce bumpers, as well as the larger wheels and tires. In the case of the base GT, those are 20-inch, machined-face aluminum wheels with black-painted pockets, and fitted with P245/45 R20 Continental all-season rubber.

“We wanted to make sure we offered an all-season tire because not everybody in the US wants to deal with swapping tires and don't live in a place where they can drive a summer tire. One calculated choice was just selecting the all-season for the GT. With the GT Performance Edition we went with the summer tire,” Fedullo added. “It's kind of an interesting thing about tire technology. I think as we get more and more electric vehicles with a focus on range that are in the performance sector, we're going to continue to see improvements in the tire, but in a summer tire, you can get a better range or a better rolling resistance and have a very performance-oriented tire when you don't have to deal with snow, for instance...”

In practice, the taut ride communicates more of the road imperfections to the driver’s hindquarters. Moreover, the all-season tires could be overwhelmed by the GT’s thrust if the driver didn’t exercise discipline upon corner entry. It only took one time to learn when to reel it in a bit, but it did show there a place for the grip and control offered by the Performance Edition’s upgraded suspension.

“That’s something that we often offer in our performance Mustangs and really excited to be able to have that on the Performance Edition package,” Fedullo said of MagneRide. “It is essentially a magnetically charged fluid that can instantaneously change jet damping, based on real-time inputs, so you can essentially optimize the steering, handling, and performance of the car much better than you can with just a standard shock system.”

Gas-powered Mustangs have long benefited from the instant adjustments delivered by these magnetic dampers. As such, switching to the Mustang Mach-E GT Performance Edition for a return trip through the stunning curves, the experience is familiar. MagneRide adjusts the suspension in line with the Mach-E drive modes to maximize performance for the given demands of both conditions and driver. However, there is another attribute worth noting — ride quality. It does a much better job absorbing those imperfections in the pavement, so it is a win for both drivability and performance, which could contribute to its early popularity.

“In regard to what we’re seeing now from order trends on the Mustang Mach-E GT and GT Performance Edition, we had more customer orders wanting the Performance Edition...” Brand Manager Lisa Teed said. “Fundamentally, it's because it’s the epitome. It’s the cat’s meow. It's got content on there that puts the power down, and it’s really the experience that's going to bring forward the fun-to-drive aspect of what we believe is a GT.”

Of course, of the two models, the Performance Edition is even better suited for this type of mission thanks to the aforementioned presence of the MagneRide suspension along with 20-inch, machined-face aluminum wheels fitted with Pirelli P245/45 R20 summer tires. On the curvy street drive, the Performance Edition delivered such scalpel-sharp handling and instant acceleration as to elicit motion sickness from those prone to such ailments, like this scribe. In short, its space-age performance did just what you wanted it to — immediately.

Moving onto a roomy autocross course of mixed longer straight sections with curves meant to test its handling, the Performance Edition excelled as well. Even with Unbridled Extend softening the performance peaks, it still ripped around the course like a champ, though its instant acceleration could overcome braking grip if pushed too hard by an overeager writer.

In all, the performance of the Mach-E GT quickly makes the driver forget about rumbling exhaust and banging shifts while focusing on the drive at hand. It might be quiet, but it’s hard to deny its worthiness of carrying the grand-touring pony into the future.

“But the best piece I saved for last!” exclaimed Ford’s Darren Palmer. “And this is why I have worked at Ford for 29 years – the price. This vehicle’s $59,000 minus the $7,500 incentive, that’s a $51,000 car that outruns every childhood hero car I ever had! And, the Performance Edition is $64,900 with the suspension and all the other features you have in there. That's what I'm most proud of. It's insanely good for that price point…”

Does anyone want to buy a lightly used First Edition?