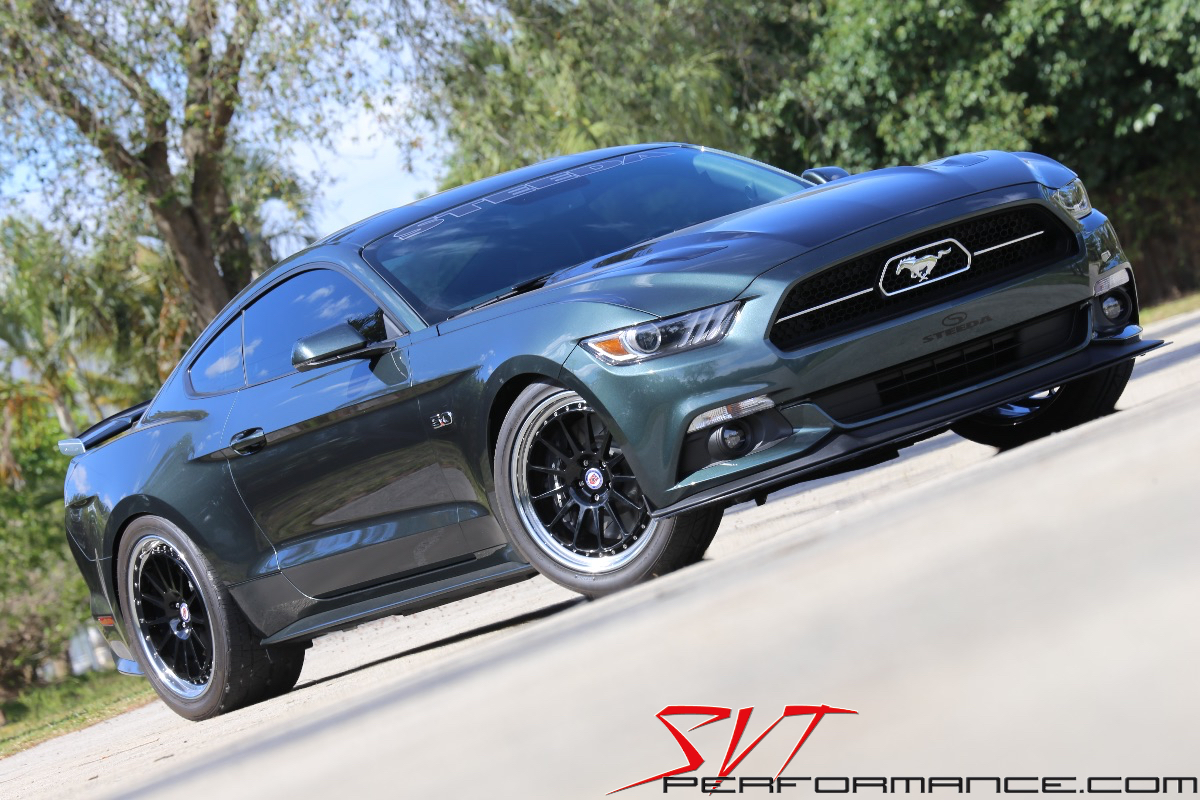 One of the more intriguing colors on the 2015 Mustang palette is Guard Metallic. More green in bright light and more gray as the light fades, this color looks clean and classy accented by the Steeda winglets and HRE wheels. 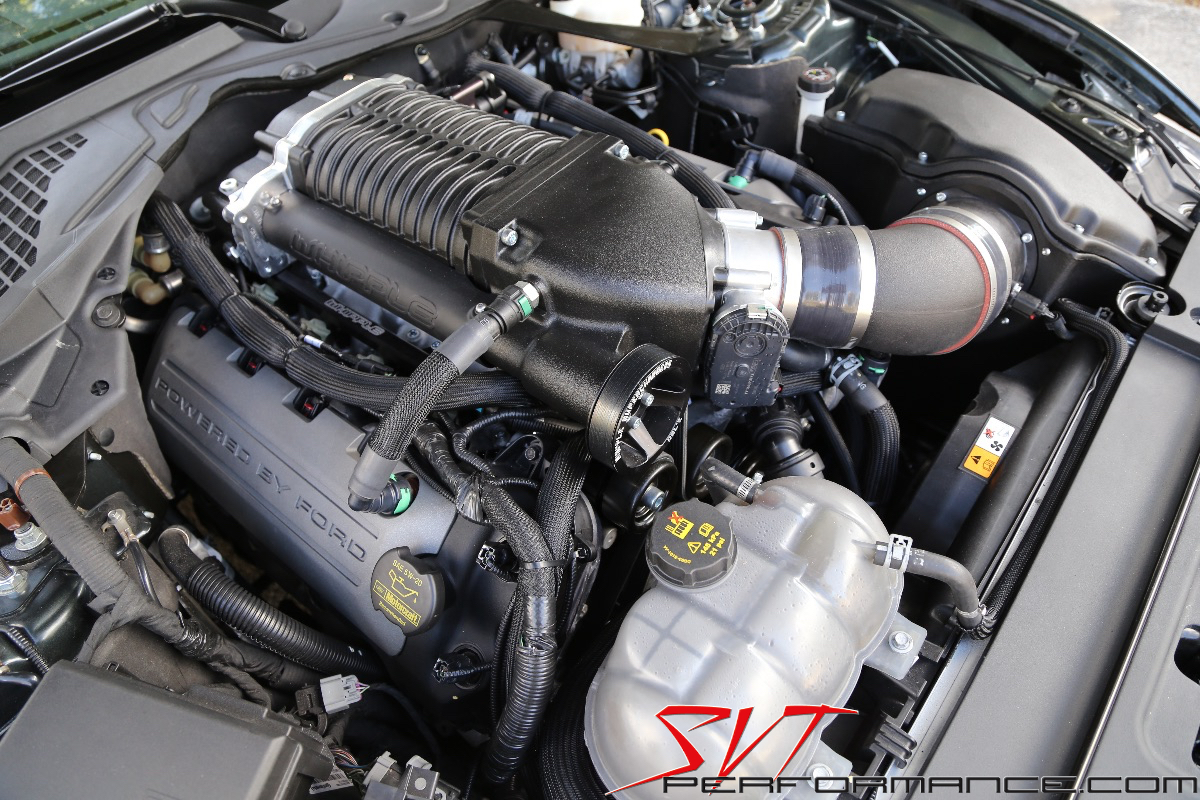 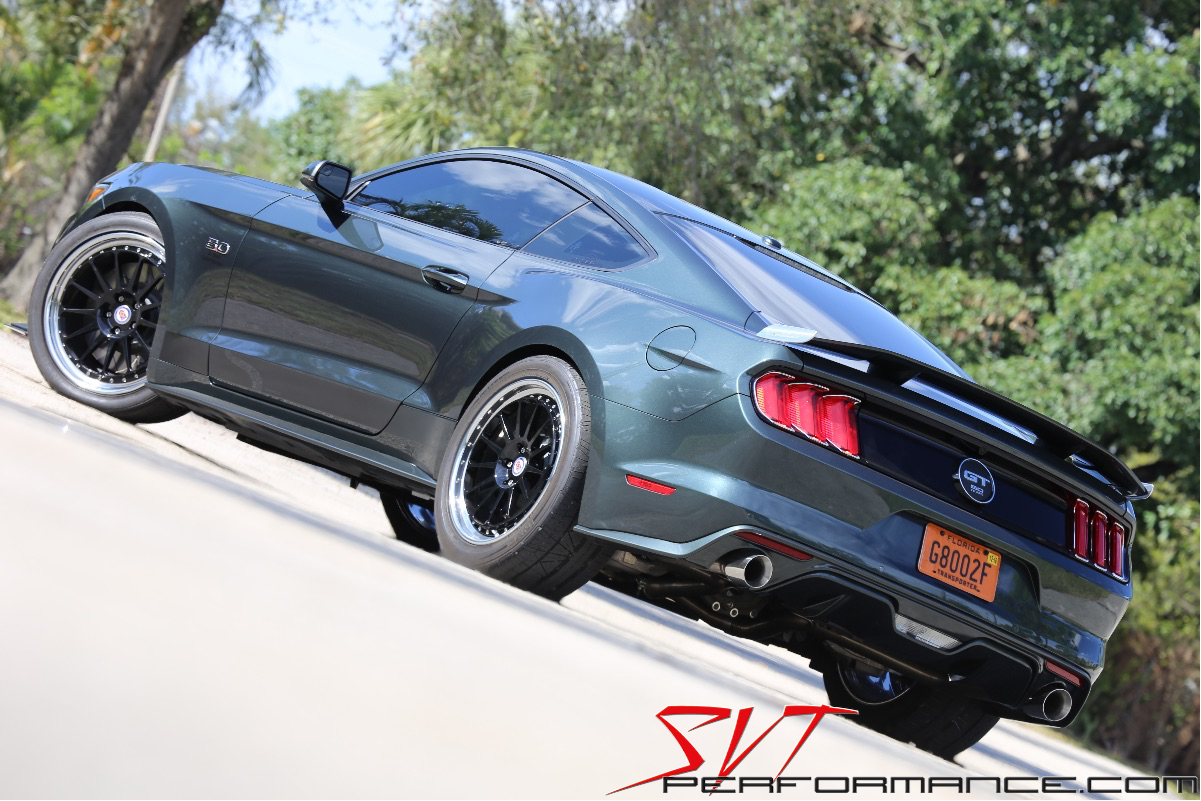 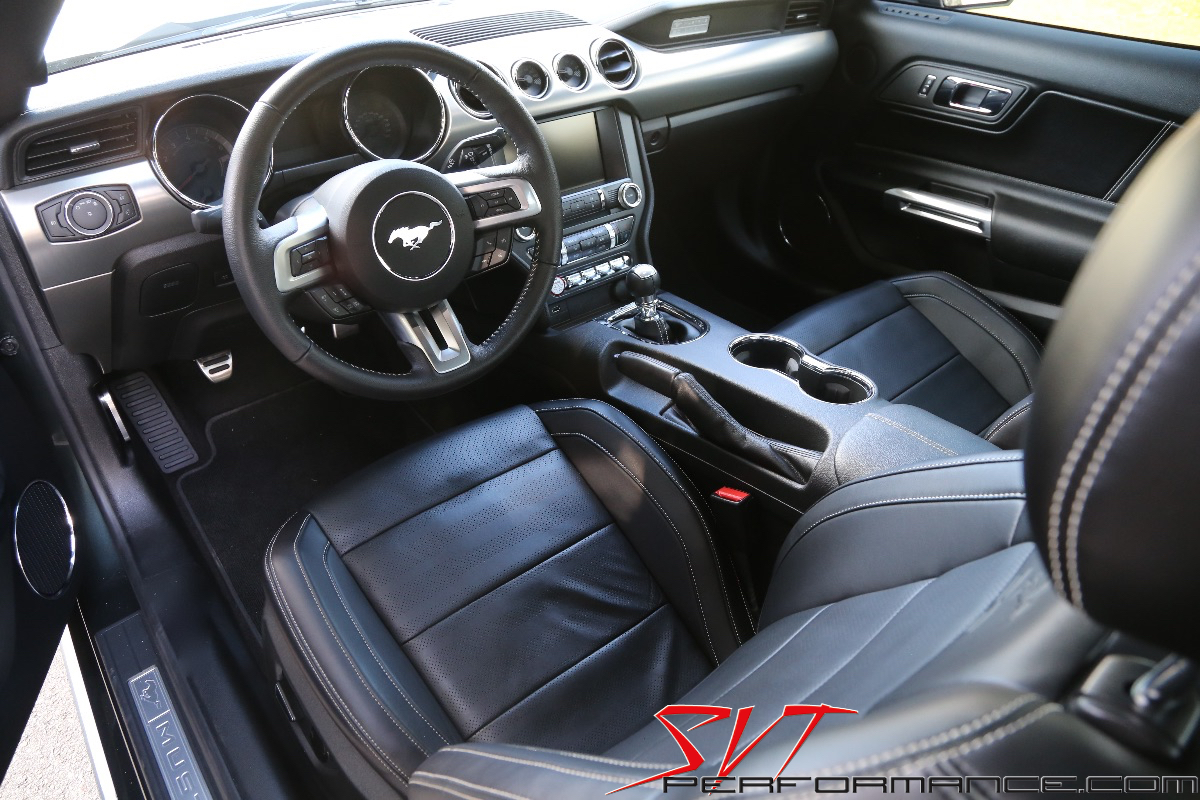 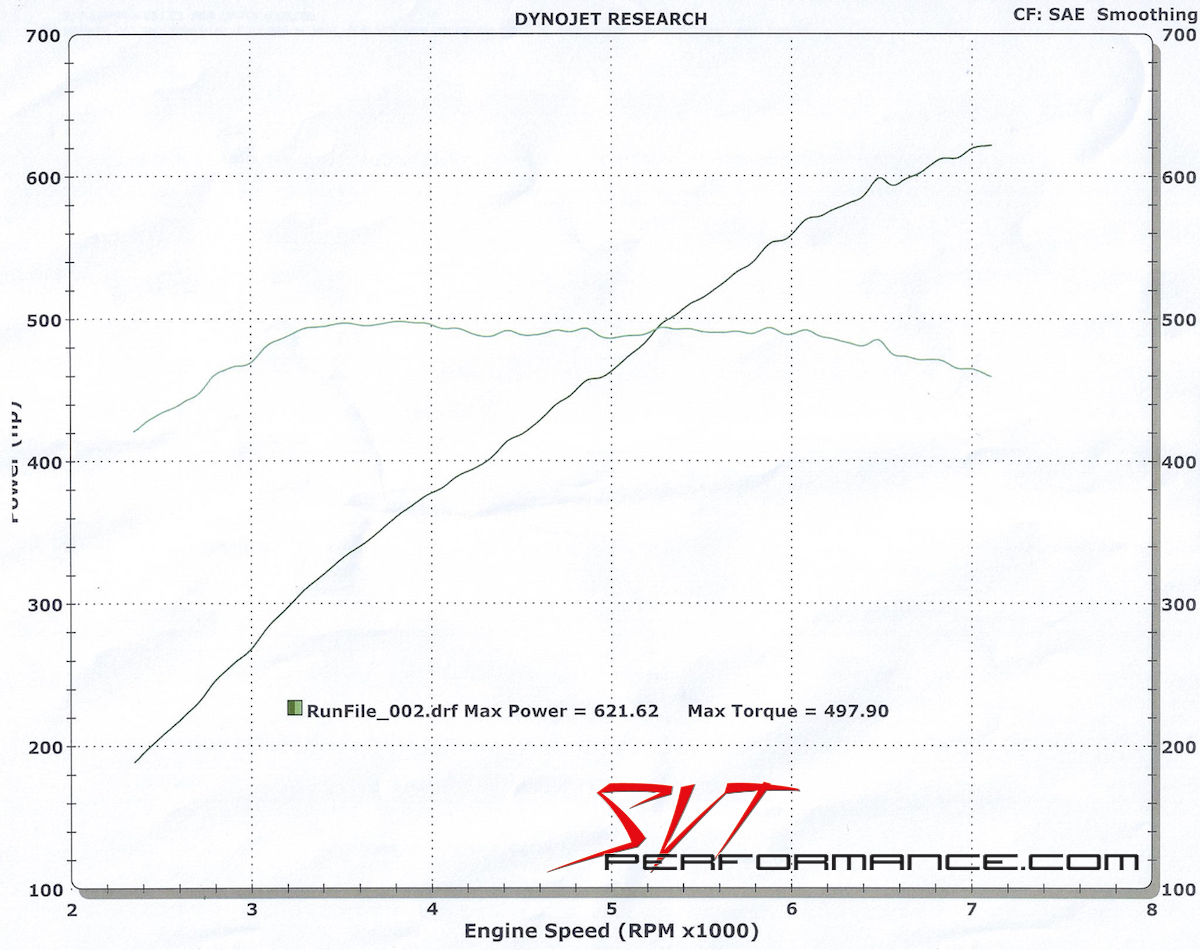 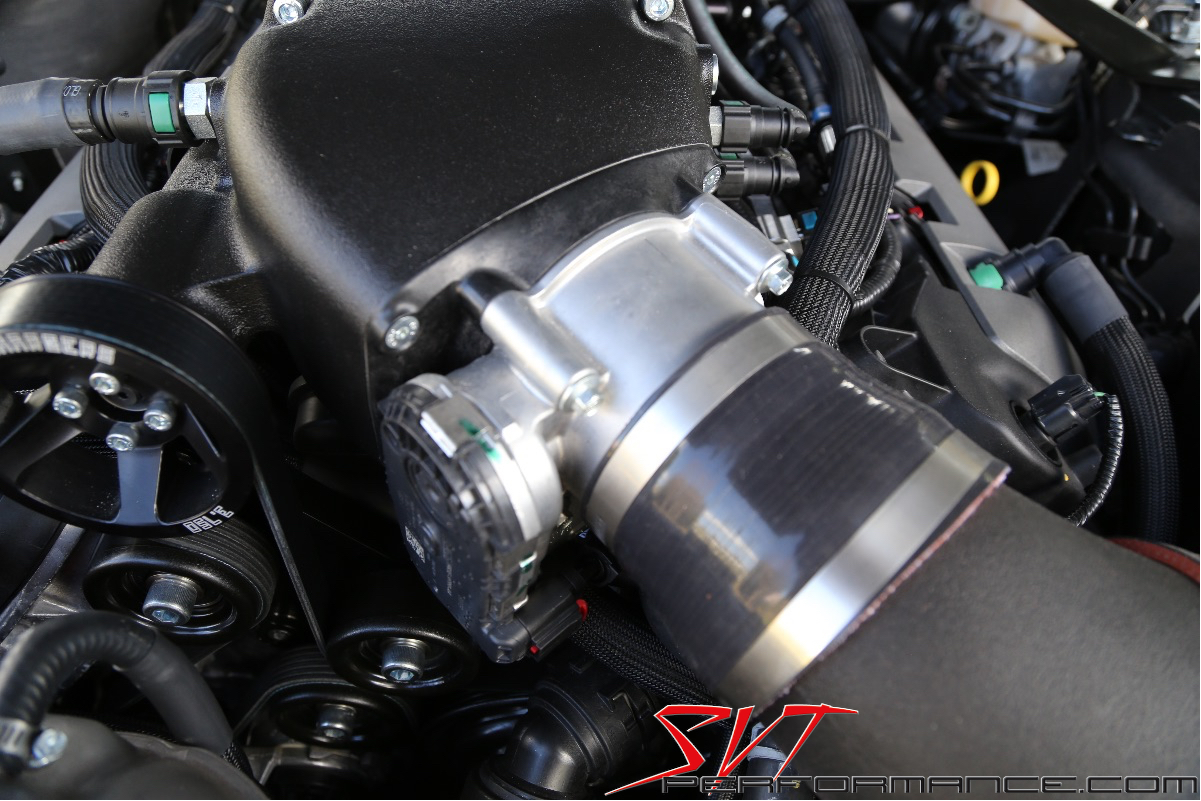 Every so often we get lucky. Being in the right place at the right time can definitely pay dividend. While standing in the shop at Pompano Beach, Florida, campus, we were offered the opportunity to experience the company’s 2014 SEMA Show star, which had recently been upgraded to supercharged Q650 specs.

As we approached the car, for what we thought would be a ride, company Vice President of operations, Glen Vitale, jumped out of the driver seat and said, “Here, you drive.” There are offers you can’t refuse and offers that you wouldn’t want to refuse. This was definitely the latter.  We swapped seats and I adjusted the seat and mirrors. The Steeda Q650’s Whipplecharged Coyote gently throbbed under us. The company’s own cat-back exhaust keeps the decibels at bay at low rpm and lets things get a bit more rowdy as you open the throttle, which is just what we were about to do.

As we maneuvered the Guard Metallic machine through the South Florida traffic, it was amazing how much of the car’s OE manners remained which belied the performance underfoot. The shifting was hastened via a Tri-Ax lever upgrade, but the full G-Trac suspension didn’t add any NVH at low speeds. Entering and exiting the highway, we were greeted with sweeping curves that demonstrated the car’s precise neutral handling. It just goes where you point it without putting up a fight.

Under the hood is a fully realized Whipple supercharger system featuring the California Air Resources Board certified calibration and sealed air box. Only this system and a Steeda cat-back exhaust, the car put down over 620 horsepower to the rear wheels.

Merging into the highway, the opportunity to see what 621 rear-wheel horsepower felt like in a modern S550 appeared. We put the pedal down and the power swelled like a wave in surfer’s paradise. It comes on strong and keeps pulling till you run out of tach. The power, however, is best applied with the car is already rolling pulling away in the lower gears more throttle angle equals more tire spin, but sometimes that’s half the fun.

[B]Besides the HRE wheels and Steeda G-Trac suspension upgrades, what makes this Guard S550 special is it wears the optional 50 Years package only available for the 2015 model year.[/B]

Dropping Glen off before heading out to find a photo location, we came away impressed with the capabilities of this street-legal modern marvel. As we made to leave, Steeda tech Matt Bouyea playfully shouted, “Don’t break it, it’s already been sold.” We didn’t, but we’re not surprised this car was heading off to a happy new owner.

While Steeda is primarily known for its thriving parts business, the company has long created its own series of signature vehicles for each generation of Mustangs since the Fox. So if you are fan of the company’s wares you can order up a car that is optioned out with that hardware from the jump. A Q650 like the one shown here starts at $29,500 atop the cost of a Mustang, but it nets you a Mustang that’s seen a ton of development to refine the finished product. Naturally, this line of cars needed a development vehicle, and this former SEMA star really started things for Steeda’s line of S550s. The company used it to develop its springs, stay bars, chassis braces and more.

Inside the factory options like Nav and leather are prevalent, but the Steeda mods are few. The car does feature the company‘s Tri-Ax lever upgrade for the factory MT-82 shifter, which hastens and sharpens the shifts while keeping NVH to a minimum.

As we made to leave, Steeda tech Matt Bouyea playfully shouted, “Don’t break it, it’s already been sold.” We didn’t, but we’re not surprised this car was heading off to a happy new owner.

“With this car and another car, we probably had the springs in and out of the car probably 50 times. And, on this and other vehicles, we probably changed stay bar stiffness 150 times until we got the right balance,” Steeda President Dario Orlando explained. “It really served as a good test vehicle for our stay bars and suspension springs. Then we went on to develop our chassis braces. This car was the end-all. We had another car in Valdosta and when they signed off, the final validation went to the Guard car.”

Here’s a look at what an emissions-legal Whipple can do for a stock Coyote. This combo spun the rollers on Steeda’s in-house Dynojet chassis dyno to the tune of 621 horsepower and 497 lb-ft of torque at the tire. If you factor in a 15 percent drive train loss that’s about 714 horsepower and 571 lb-ft, and we know more is available with the Whipple throttle body and custom tuning. As it stands, the street-legal calibration offers more than enough to put a smile on your face after a long day at the office.

The Steeda team is expert at improving the handling and driving dynamics of a Mustang, but when it came to choosing a power adder they wanted a combination that was both driveable and emissions legal, so the company opted to partner with Whipple Superchargers for its boosted Q cars. “It’s a proven system. We have been using it for decades and, more importantly, it’s CARB-approved…” Dario said. “This way our customers can order these packages whether they are in California, New York or any state.”

What makes the rear-wheel prowess of this car all the more impressive is that those numbers were achieved with the stock throttle body adapted to the front-feed Whipple 2.9-liter supercharger. By now we know that positive-displacement blowers like this one are far more efficient with as few inlet restrictions as possible, but this car still makes well over 600 with the stock throttle body in place.

Combining the CARB-certified might of the Whipple Coyote with Steeda’s sharpened suspension gear and other mods turns a stock Mustang GT into an incredibly balanced performer. “It’s phenomenal…” Dario said of the finished package. “Because of Ford building a great platform to add to and take this car to the next level as far as performance. You are at 700 (flywheel) horsepower with a CARB-approved Whipple kit and adding all the different suspension components it’s a remarkable, world-handling performance vehicle.” Of course, just because this vehicle is moving on to a new owner doesn’t mean the S550 development is slowing down at Steeda.