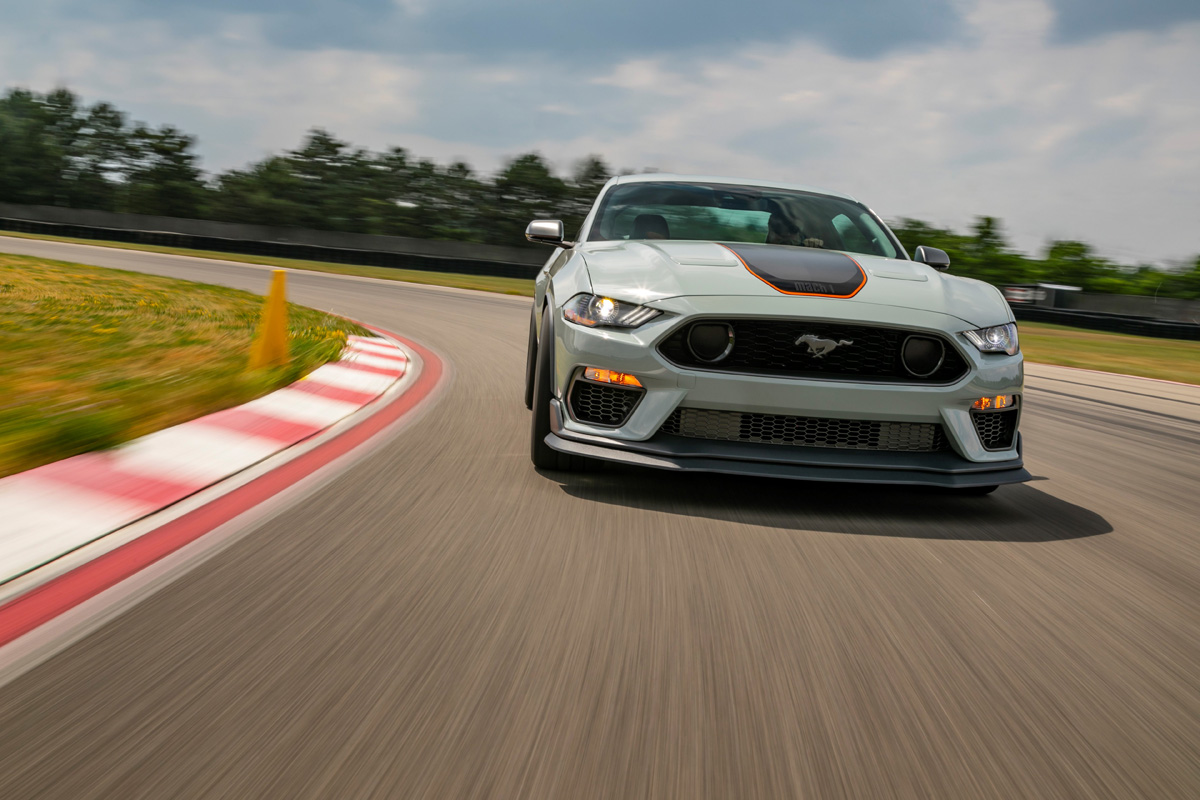 Mustang Mach 1 makes its triumphant return for 2021. The limited-edition model will feature a 480 hp 5.0 Coyote with a choice of manual or automatic transmission.

Since 1969, Ford’s Mach 1 has pierced its way into the hearts of enthusiasts who fell in love with the stylish and racy package.

The original Mach 1 packed sportiness and performance into the popular Mustang, a theme which continued through the Mustang II era until 1978. Mach 1 returned briefly in 2003-04 with classic styling cues, ample power and a Shaker hood. Unfortunately, it disappeared as quick as it hit the dealership floors.

Fordnatics fully expected to see a Mach 1 with the retro-themed 2005-09 models, but the Mach 1 moniker remained locked in Ford’s vault. Instead, the Blue Oval gave us the Shelby GT, Boss 302, Shelby GT350, GT500s (even a KR)—plus the Bullitt and California Special. But now, after a 17-year hiatus, Mach 1 is BACK!

New for 2021, the Mustang Mach 1 fastback coupe hits the streets with 480 horsepower, choice of manual or automatic, a track-worthy suspension, and striking looks. “Bold styling, great acceleration and speed—Mach 1 says it all,” said Jim Farley, Ford’s chief operating officer. “This is one of those special Mustangs that truly brings a smile to the faces of our owners, enthusiasts and fans—including me—so there’s never been a better time to bring back Mach 1 and have it go global too.”The original Mach 1 packed sportiness and performance into the popular Mustang, a theme which continued through the Mustang II era until 1978. Mach 1 returned briefly in 2003-04 with classic styling cues, ample power and a Shaker hood. Unfortunately, it disappeared as quick as it hit the dealership floors.

Mach In The Middle
‍Mach 1 bridges the gap between Mustang GT and Shelby models, delivering V-8 power, unique functional aerodynamic enhancements, competition-capable suspension upgrades, and a driver-focused cockpit.“ The production run is relatively low for this special edition,” stated Berj Alexanian of Ford’s communication team. “The Mach 1 customer is likely already someone who is already a Mustang fan, whether they’ve owned one or not."

"The team sought to deliver the pinnacle of 5.0 performance, not only for acceleration and handling, but for endurance,” said Ford Mustang Program chief engineer Carl Widmann. “Endurance is what we really want to deliver.” Naturally, our first question was about the lack of a Shaker hood scoop. “The original Mach 1 didn’t have a Shaker hood and this version will not either,” said Widmann. “We weighed off-the-track desire for installing a hood scoop, and the minimal impact you’d get by running the air from there [the scoop] back to the front corner like we’ve done in the Gen 4. We get better air pulling from the front with an open-air box and we don’t have any of the down-side, lift issue with basically a big hood scoop,” he explained. 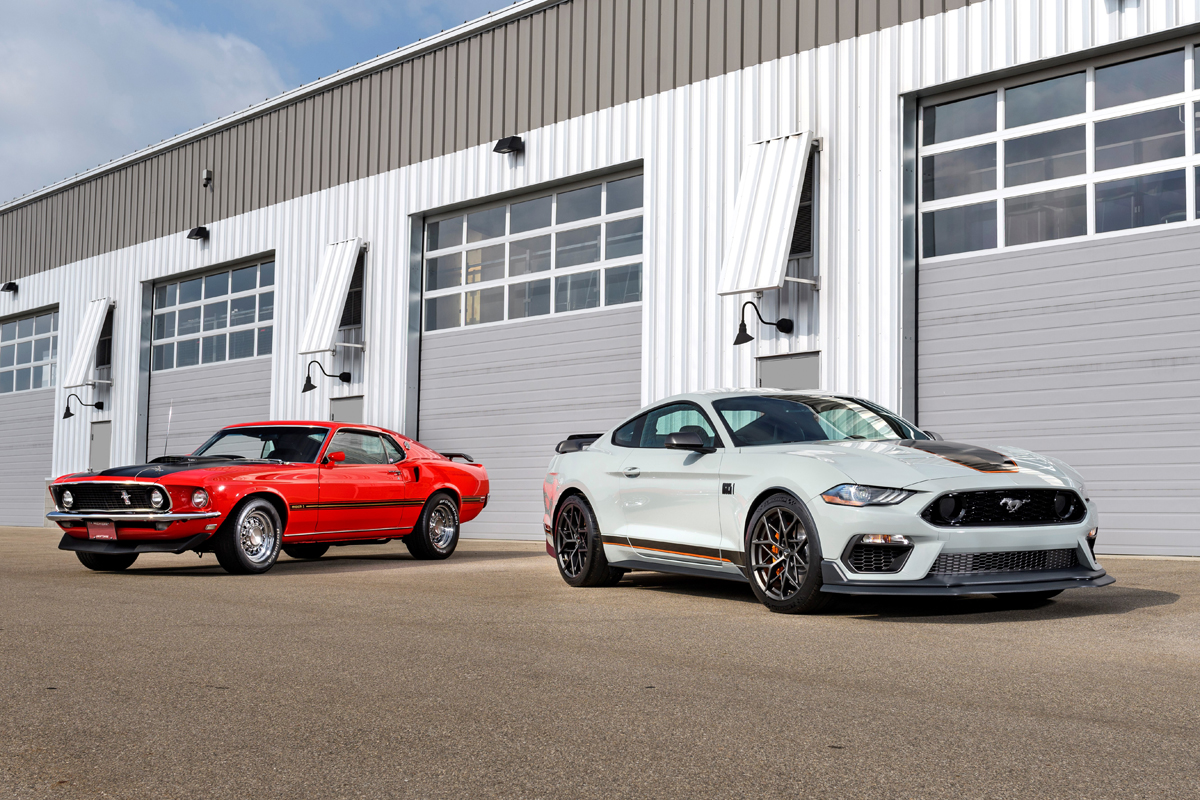 When it came to targets, the team was very specific about desired performance levels. “With the manual, we wanted to target the 2012 Boss specifications and with the automatic we wanted to target the current Level 1 Performance Pack GT,” he added. “We’re able to pull the heat exchangers off GT350 and put those into the 5-liter application on Mach 1 and really get the air to them, and also dedicated air cooling ducts for the brakes, which is a first. There’s one for the oil cooler and one for the transmission on the other side. It gives us about 75-percent more cooling on the automatic version, which is a plus for people who really want to take the automatic and get the most out of it. It also has the rear-axle oil cooler off the GT350/500. We’ve also added the rear diffuser out of the GT500.”

Mach 1 utilizes the Tremec from the Shelby GT350 mated to a 5.0 Mustang GT clutch with rev-matching. Widmann stated the Mach 1 runs through two heat exchangers on the 10-speed so it can shift at maximum performance and dissipate the heat on track. “So the decision came early on, it wasn’t going to have a Shaker hood. We’re able to use the open-air intake that we developed for the Bullitt and it revs all the way to 7,500 rpm. So we’d get that reward to rev, because we’re going to match that engine with a manual, a new manual this time, a Tremec, and also with a fast-shifting 10-speed. So that’s what we wanted to do from the power perspective. Take the best we have in 5-liter and apply it in a new light. This is the same team I’ve had for the last five years in aerodynamics,” Widmann added.

Chassis and Suspension
‍“For the tuning of the chassis, we’ve done MagneRide as standard, but we’ve also added the front and rear sub-frames from the Shelby so it’s stiffer and gives quicker turn-in. We’ve also widened the front and rear wheels by a half-inch,” he said. “On top of that, we have a handling package that will be available. It’s reminiscent of what we’ve done on Level 2 Mustang. So we’ve taken a lot of what we learned on the PP2 with Michelin Cup 2s. We go to a 10.5-/11-inch staggered wheel fitment and we take the adjustable strut mounts for the GT500, and the GT500 wing off the back with the Gurney flap.” 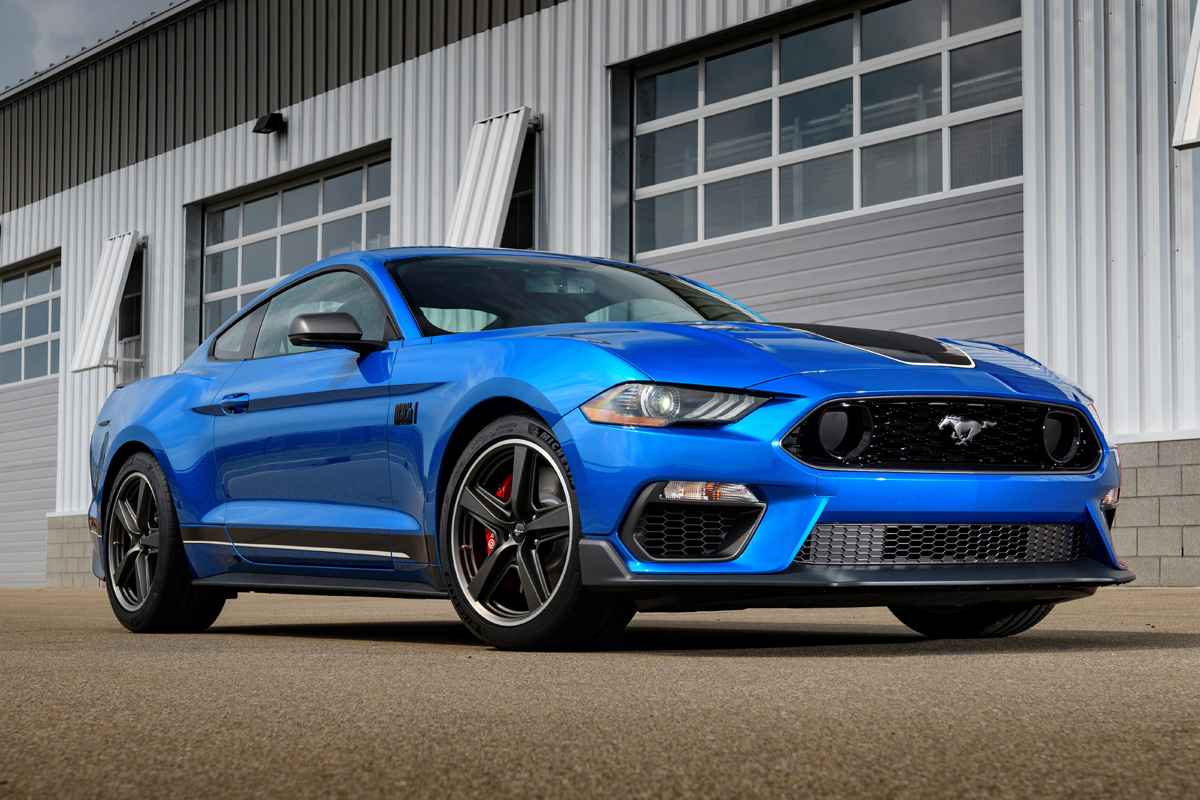 The 2021 Mach 1 will be available in 10 body colors with three different stripe options. This model is shown with the standard 5-spoke 19-inch wheels designed to resemble the original Magnum 500s.

Mach 1 Style
‍“The 2021 Mach 1 is one of those vehicles that walking up to it puts a smile on your face,” said Gordon Platto, Ford’s North American design director of cars and CUVs. And that’s what every icon should do. “The key character cue is the all-new front end, added Platto. “This is purpose-built and based on function of aerodynamics and cooling, and it really looks powerful, it looks aggressive. Honestly, we wanted to make this vehicle look as menacing as we could. We didn’t want this to strictly be a heritage vehicle, we wanted it to have a notch to the future as well. We think this is a very modern interpretation."
‍
One of the key elements is the two-piece deep-dish, mesh grille and implied bezels or nostrils within the grille. The Pony is proudly centered in the grille in a low-gloss magnetic that’s used throughout the vehicle in areas like the rear spoiler and badging and accent on rear-view mirrors.‍

The option also includes a larger, higher-downforce front splitter, new front-wheel lip moldings, and a low-gloss magnetic swing spoiler with a Gurney flap and rear tire spats from ShelbyGT500.”It also features satin-black stripes on the rocker and hood with a reflective and comes in three colors (10 body colors). A special color is called Fighter Jet Gray and this model gets orange on the Brembo brakes as well. Flanking the fascia are new side grilles below each turn signal lamp. A low-gloss magnetic pony badge is centered on the grille. Low-gloss magnetic and black accents throughout the vehicle provide a premium look while staying true to Mach 1’s bold, muscular heritage, including low-gloss magnetic mirror caps and rear spoiler. New 19-inch x 9.5-inch, and 19-inch x 10-inch five-spoke Tarnished Dark-painted aluminum wheels are a modern version of the classic Magnum 500 style wheels. 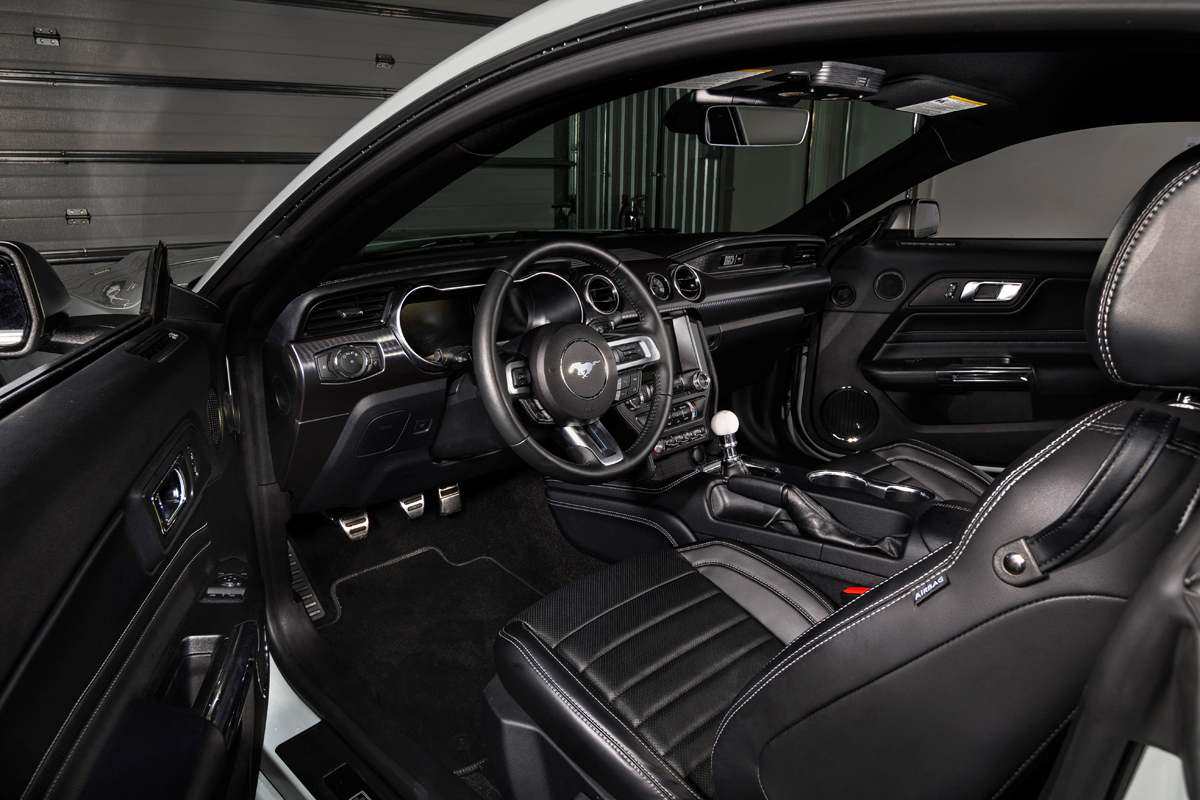 Mach 1 features some unique interior pieces such as a serialized plate and four seat options.

He then spoke about the Mach 1 interior. “The dash is called Dark Spindrift, a new take on spun metal. There are new door sills with Mach 1 logos, a serialized badge, and white, cue-ball shifter. There’s Mach 1 heritage in the seats as well and there are four different seats, including cloth, leather and Recaros.” Ebony seats with an accent stripe hint at Mach 1 heritage in cars equipped with a leather interior. Other interior upgrades include new door-sill plates, an updated splash screen on the 12.3-inch all-LCD instrument cluster, a white cue ball shift knob, and engraved badging that displays the vehicle’s unique chassis number.

Mach 1 features 22-percent more downforce than a Mustang GT with Performance Pack Level 1 and the downforce improvement jumps to approximately 150-percent with the Handling Package. To enhance track endurance, the team added two heat exchangers —one to cool engine oil, the other transmission oil — as well as a rear-axle cooling system and lower diffuser from Shelby GT500.

A new underbelly pan, the vehicle’s most aerodynamically important upgrade, extends 20 inches further rearward than on a Mustang GT Performance Pack to smooth and increase the airflow under the front of the car. Large underwing features in the belly pan increase downforce, while special belly pan airfoils in the brake cooling ramps improve downforce and assist the brake cooling flow—a first for Mustang. 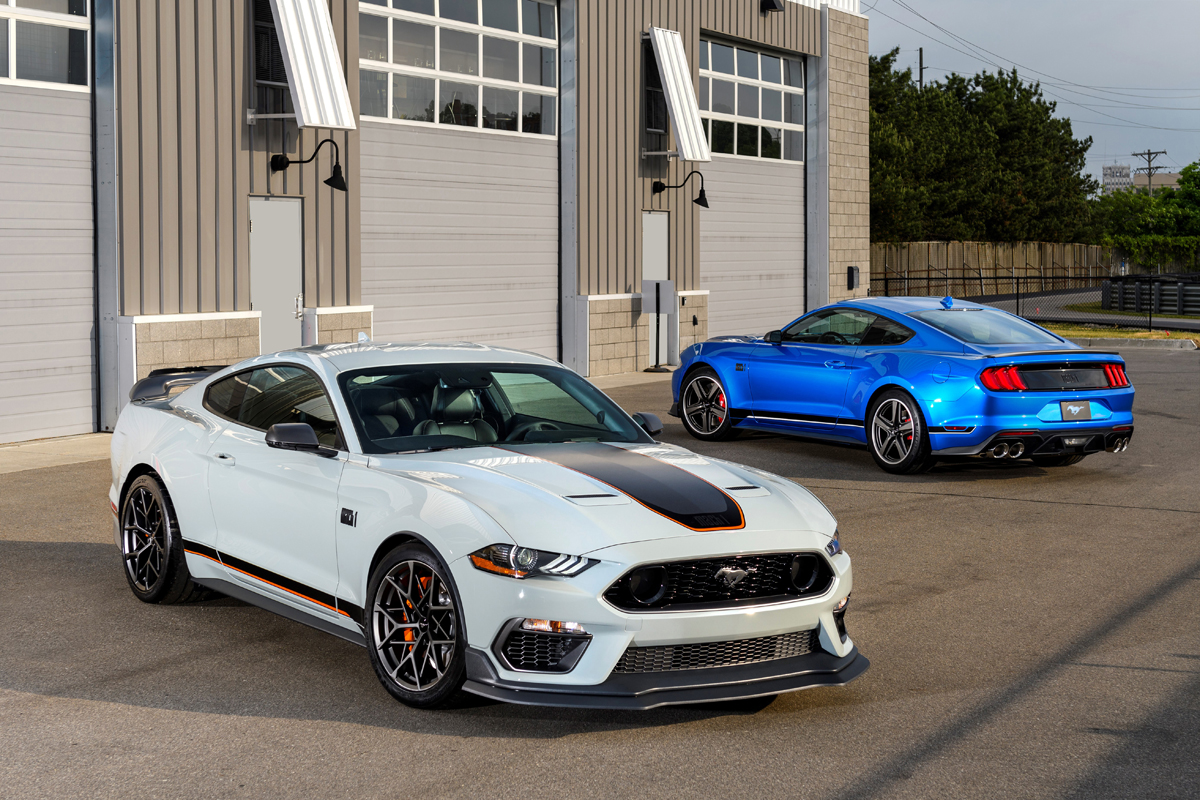 Exterior styling cues include a new front fascia and grilles for both improved cooling and aerodynamics; low-gloss magnetic and black accents as well as hood and side-body stripes with reflective surfaces celebrate Mach 1 heritage dating back more than five decades.

‍Track Attack
‍According to Ford, the Mustang Mach 1 will eclipse even the PP2 to become the most track-capable 5.0-liter Mustang ever. The team was able to achieve this with a newly-designed front end, plus Ford Performance parts from Mustang Shelby GT350 and Shelby GT500 to deliver an optional Mach 1 “Handling Package” for greater at-limit handling.

“Packing a specially-calibrated 5.0-liter V8 engine that produces 480 horsepower at 7,000 rpm and 420 lb.-ft. of torque at 4,600 rpm, Mach 1 is a fitting celebration of a nameplate born more than 50 years ago,” said Widmann.“ Integrated into the Mach 1 engine are revised Shelby GT350 components including the intake manifold, oil filter adapter and engine oil cooler, increasing engine oil cooling capability by 50 percent.” The 480 hp 5.0 is backed by a Tremec 3160 6-speed manual transmission from the Shelby GT350. It features rev-matching and is paired with the GT350 oil cooler system and Mustang GT's twin-disc clutch and short-throw shifter. Those wanting an auto can pick the popular 10-speed SelectShift™ transmission paired with an upgraded torque converter and unique calibration which enables optimized torque capability, shift character, and overall-enhanced performance. A second air-to-oil cooler increases cooling capacity by 75-percent.

The all-new and limited-edition 2021 Mustang Mach 1 will arrive in U.S. and Canadian Ford dealerships in the spring of 2021. 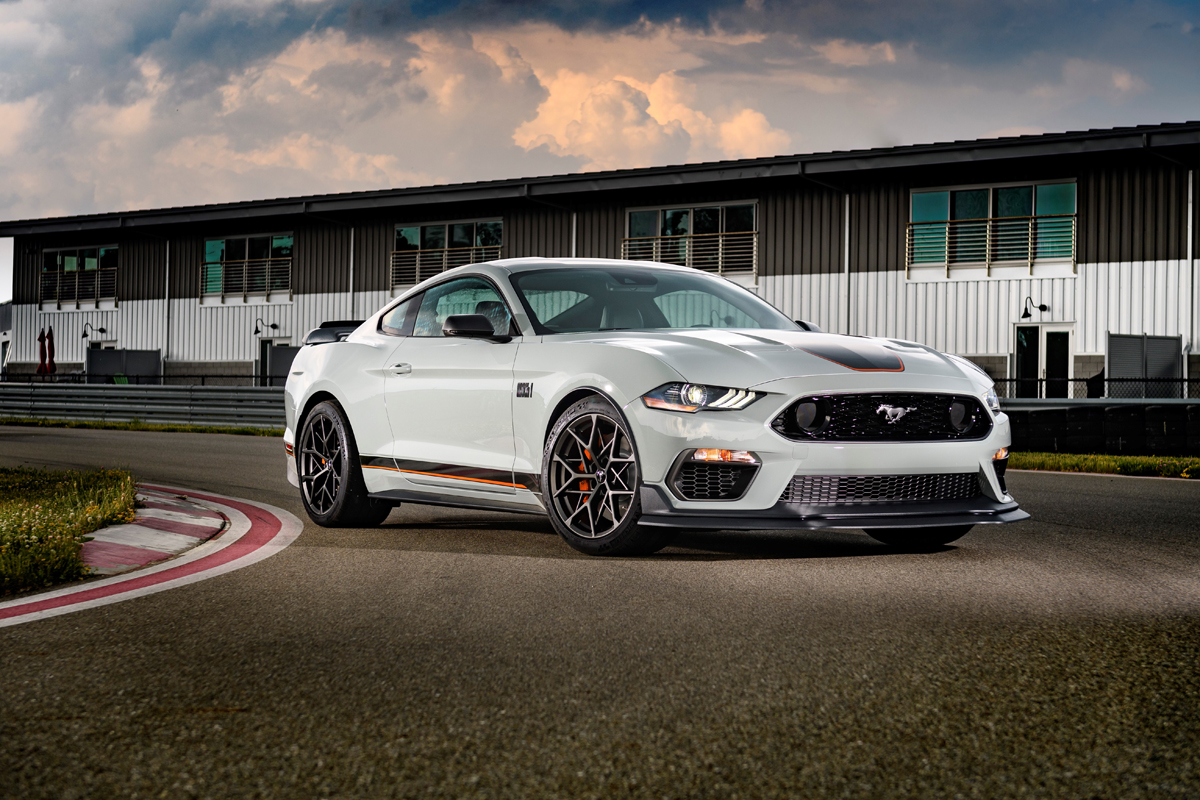 Here’s the optional Handling Pack Mach 1 with 19-inch wheels and bits borrowed from the Shelby GT500. 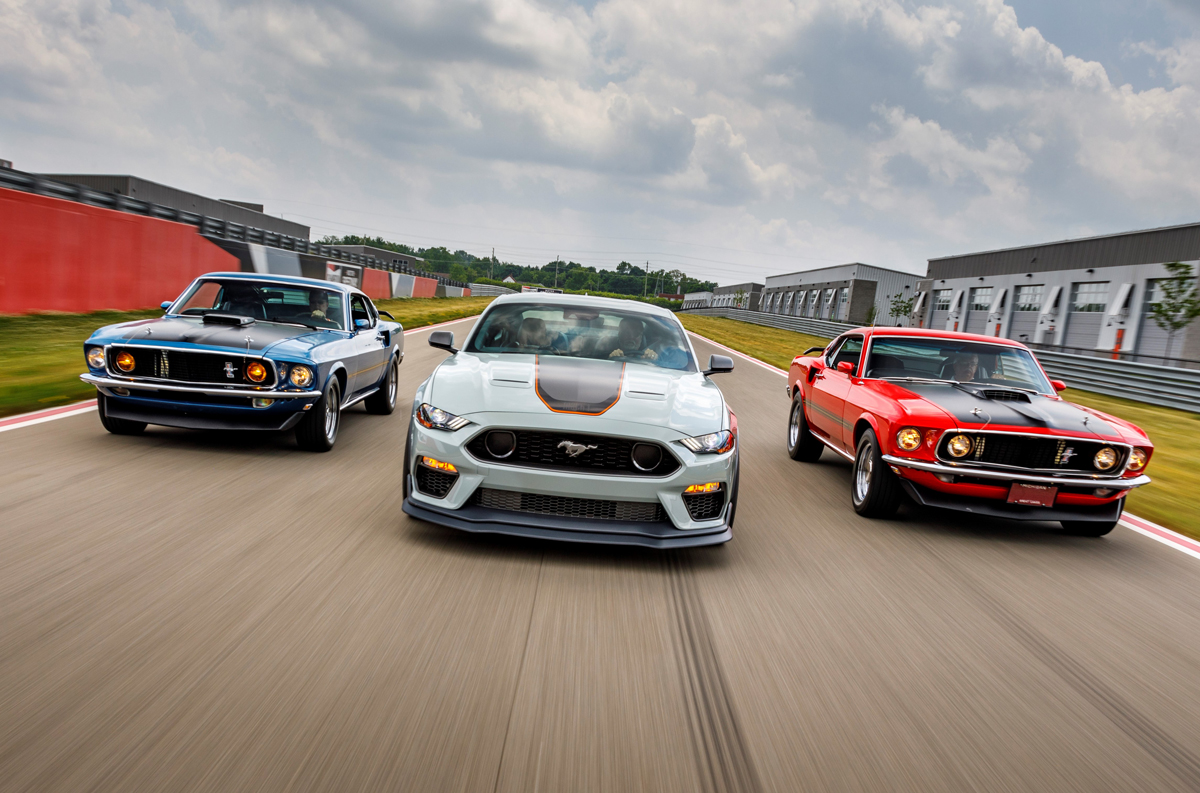