Returning to a Lost Love

Thirty years ago, I fell in love with the sport of drag racing while attending the 1990 Fun Ford Sunday at Atlanta Dragway in Commerce, Georgia. It was the second event for what became Fun Ford Weekend.  That’s when I made my first ever drag-strip pass in my 1989 Mustang.  Half-way down the quarter mile, I was hooked like a large-mouth bass that had just swallowed a Johnson Silver Minnow. From then on, I knew I would always want to drag race. 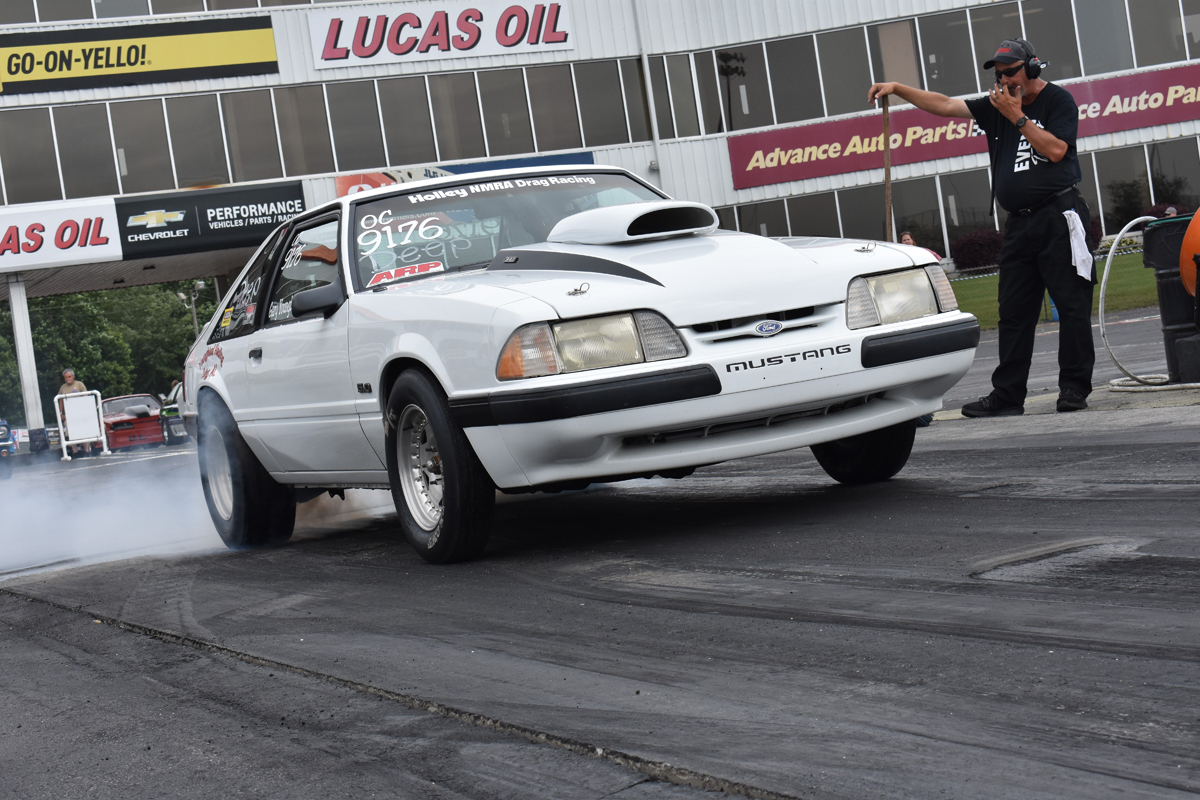 Fifteen years later, I stood in the parking lot of the Atlanta Dragway and watched the last Mustang I would get to race for the next fifteen years drive away, sold and on the back of a roll-back. Had I known I would not be in a race car again until 2020, I would have laid down in that parking lot and cried like a big fat baby who just got diapered with a pamper that had been in the freezer for two days!  Although I am not from Georgia, I have a special relationship with Atlanta Dragway. It was the first and last track where I raced and the first track where I won a National Event. I feel completely blessed to get this chance to race again at this point in my life. In addition to the love of racing, I gained so many great friends during my racing years – too many to count.

One night, when I was being “G-Man, King of Karaoke”, He sent me an angel named Amy. From the moment I met her, it was easy to walk away from the painful life I was living because I had found my real true love.

Toward the end of the first 15 years I raced, my life was in turmoil. At the races, I had a good time and not just on the track. During the last five or six years I raced at Fun Ford Weekend, everyone who knew “G-Man” knew how much fun I had off the track too. I escaped from the reality of stuff in my personal life with racing and the legendary partying that happened after racing each night. For me, partying hooked me the way racing did, and I was really good at it. 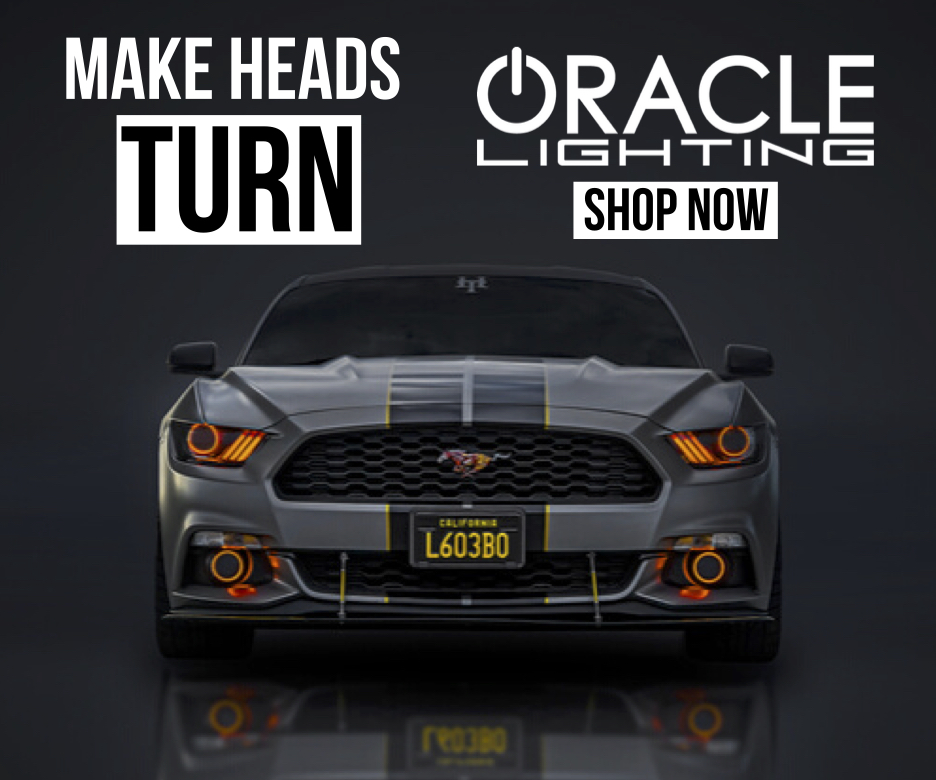 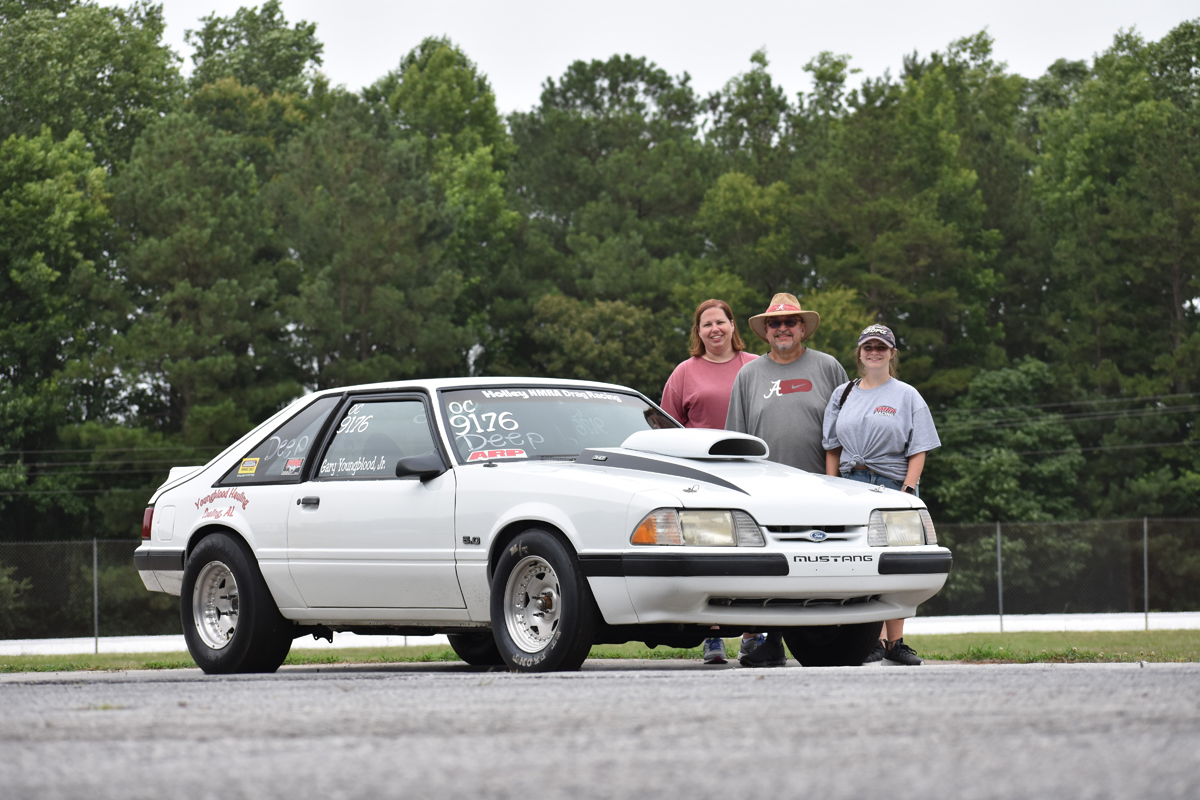 As much as I love racing, the love of the party became almost as important as the race itself. Most of the time, I was just as concerned about making sure my beer was going to be cold enough when I finished, as I was about making sure my car would run the number on the next day.  When that last race car was sold, I was recently divorced and had a young son at home. If I was going to party and act a fool, I realized I could do that in my home town without the cost of traveling and race cars. It was a bad time in my life, and I had to learn some very hard lessons and pay some high prices during this time.

When I was 11 years old, I met my best friend, Jesus, who has always loved me way more than I loved myself and He has been much better to me than I deserve. He was merciful enough to show me grace during this time in my life.  One night, when I was being “G-Man, King of Karaoke”, He sent me an angel named Amy. From the moment I met her, it was easy to walk away from the painful life I was living because I had found my real true love. 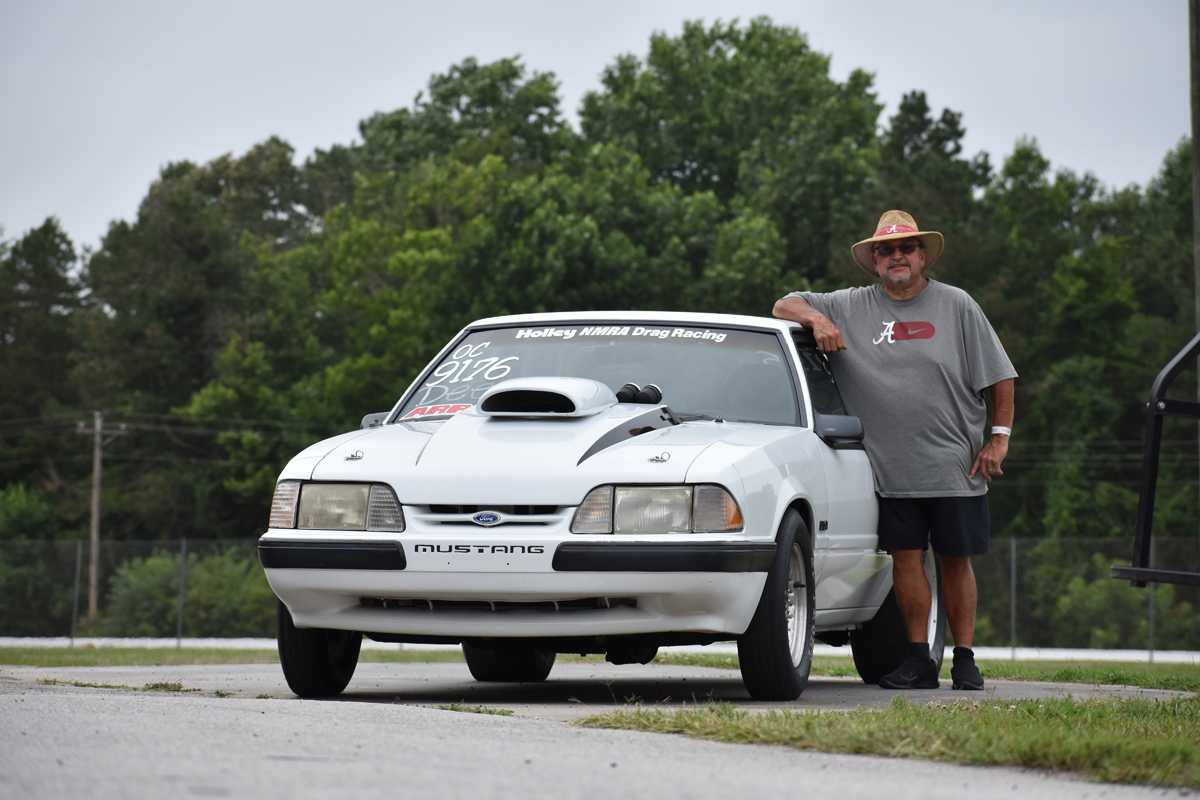 I ended up with a wonderful wife and also inherited two daughters. Amy and I set out to raise Logan, our son, and our daughters, Hannah and Gracie. My life was very busy, but it was happy. As I began to be happy again with myself, I realized what I had given up when I lost drag racing and I longed to have it back. Amy is doing well in her career as an Accountant at the University of Alabama (ROLL TIDE!!!) and I am in the later years of my career at Shelton State Community College. Currently, we have all three of our children in college.  Logan (24) will graduate and be an RN at the end of this Summer, Hannah (21) will be a Paramedic by the end of next Spring, and Gracie (19) will finish her accounting degree the following year. Gracie wants to change her major to drag racing, so she can be full-time crew after all of the fun she had at the NMRA/NMCA race this past weekend! 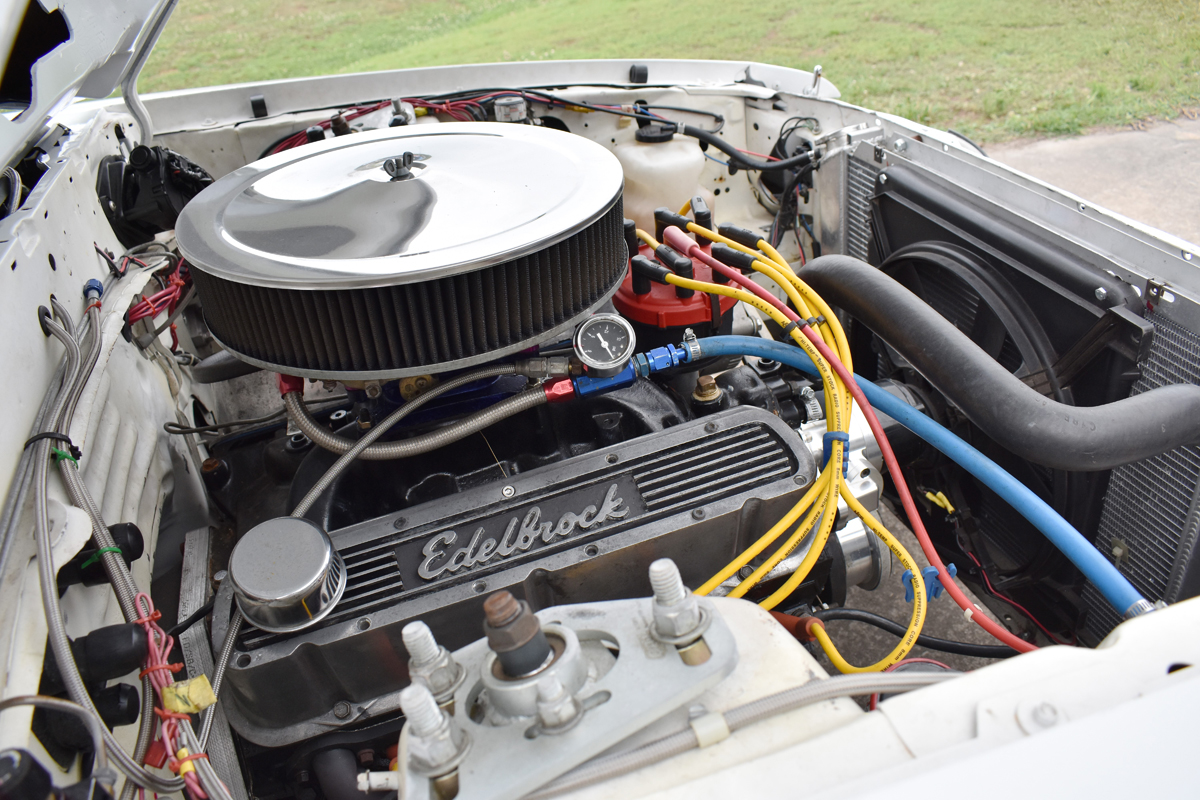 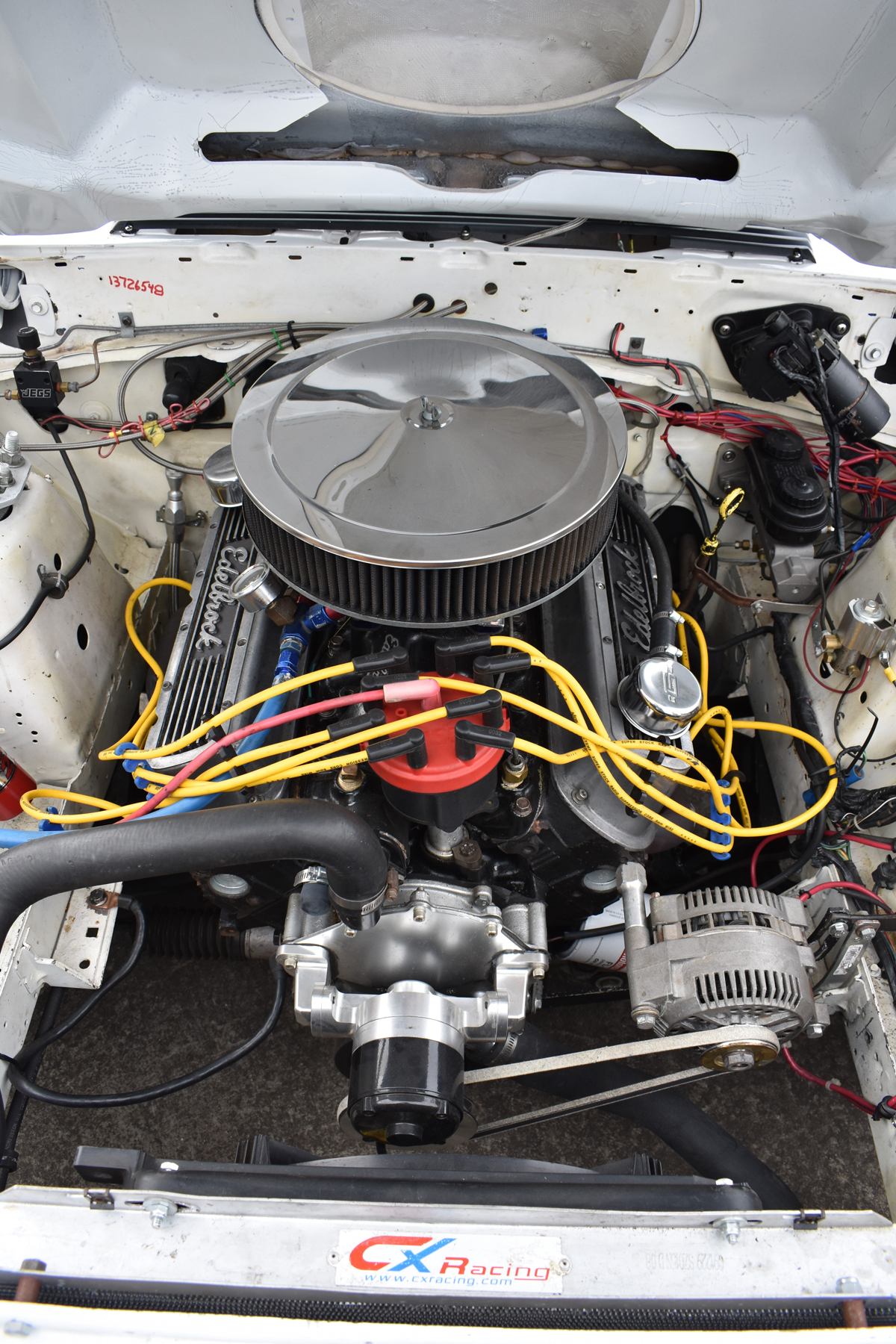 In the past five years, I have dealt with numerous health problems which kept me in a hospital bed where all I could do was dream about returning to the track. There were a few times where I thought it was questionable of whether I would even get to go home from the hospital, much less ever have any hope of racing again. I prayed a lot during this time, and I appreciate that many people prayed for me, many times, and on multiple occasions. In my prayers, I told God that I understand what He had done for me, and that I have been allowed to have happiness in my life again. I asked Him that if I could not race again, just let me get healthy and enjoy the life that I have been given. But I promised that if I could, I would give Jesus the credit for allowing me to get back and would not lose perspective on why I was at the track.

My parents, with the blessing of Amy, said they would try to help me if I wanted to start back drag racing. Having their support means everything to me because I realize that it is very hard for someone who does not have the drag racing disease to understand how much it means to someone who wants to do it.  So, with all my heart, I want to thank my parents, Gary and Pat Youngblood, for the Youngblood Hauling Sponsorship on the car. Also, I thank Amy for being by my side to support me and to learn something new because she realizes how much I love it. Gracie came along on the trip and she is just totally loving everything about racing and I think everyone got a kick out of her joy of being at the track. Logan and Hannah are also excited for me to get to race again. Thank you Lord for letting me make it back and giving me the opportunity to give glory and honor to where all good things come. 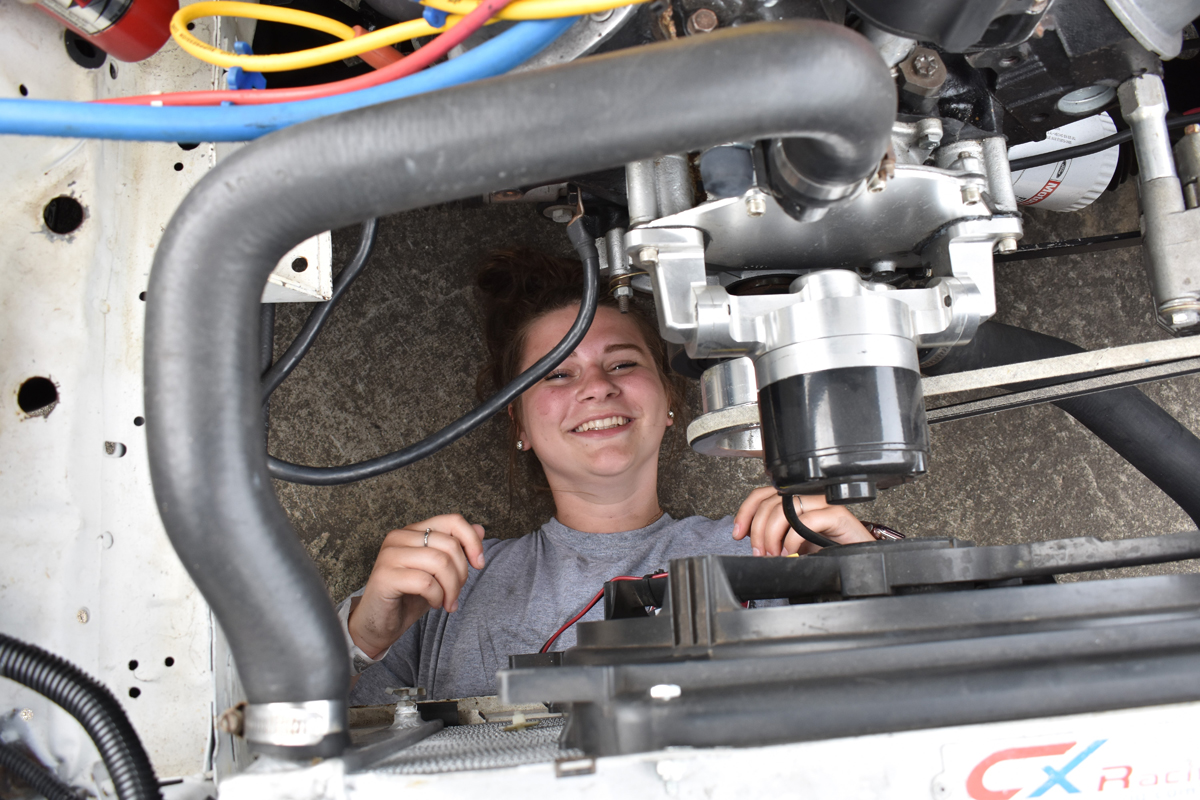 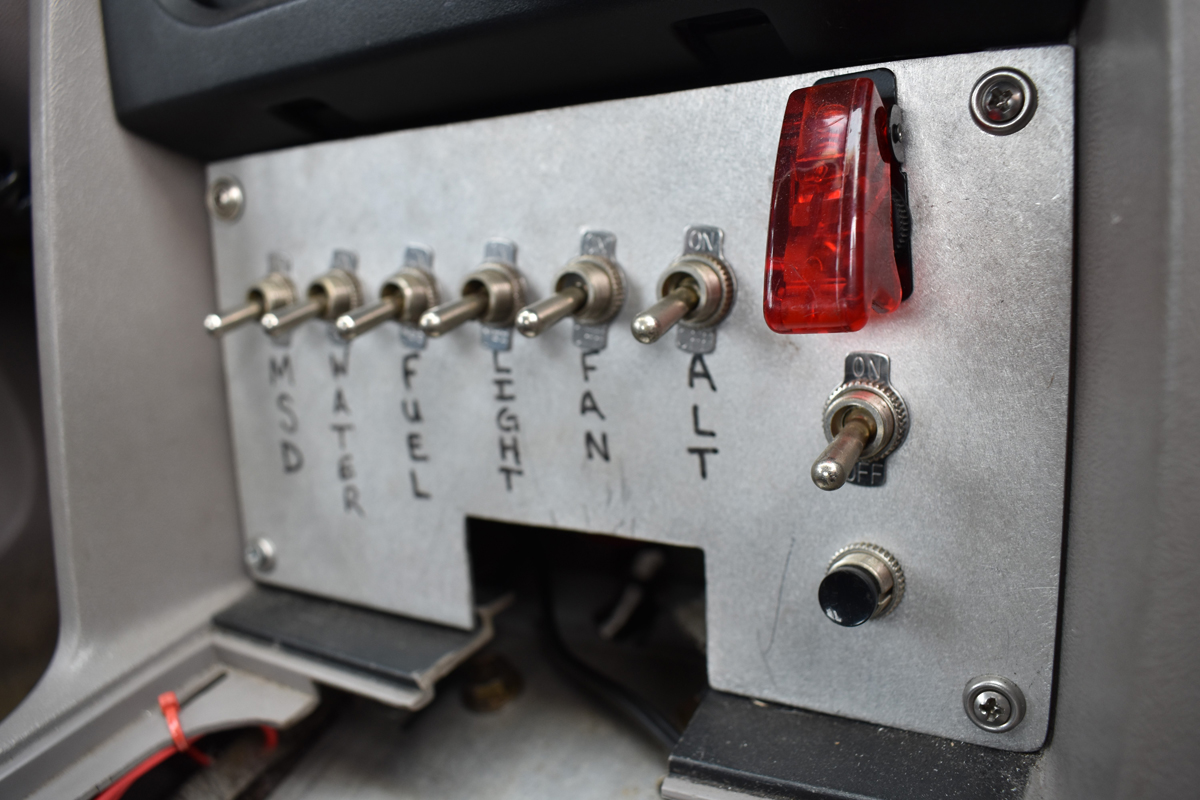 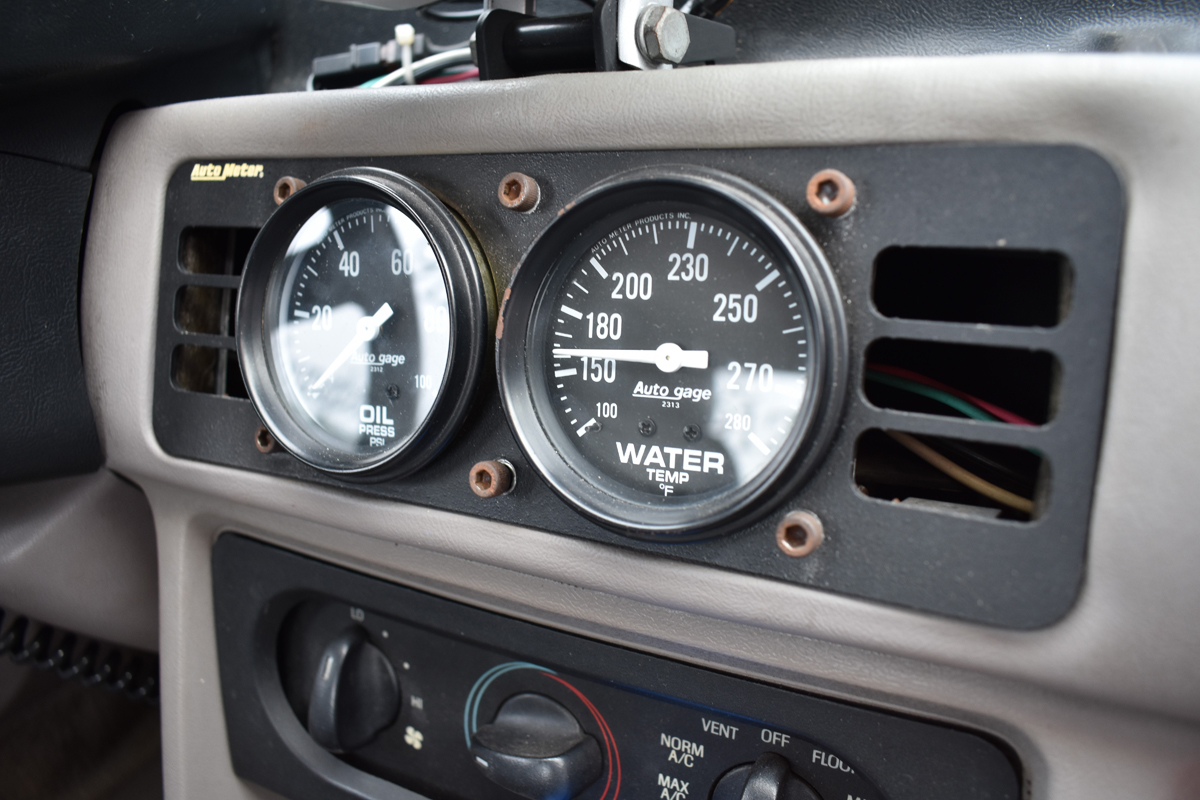 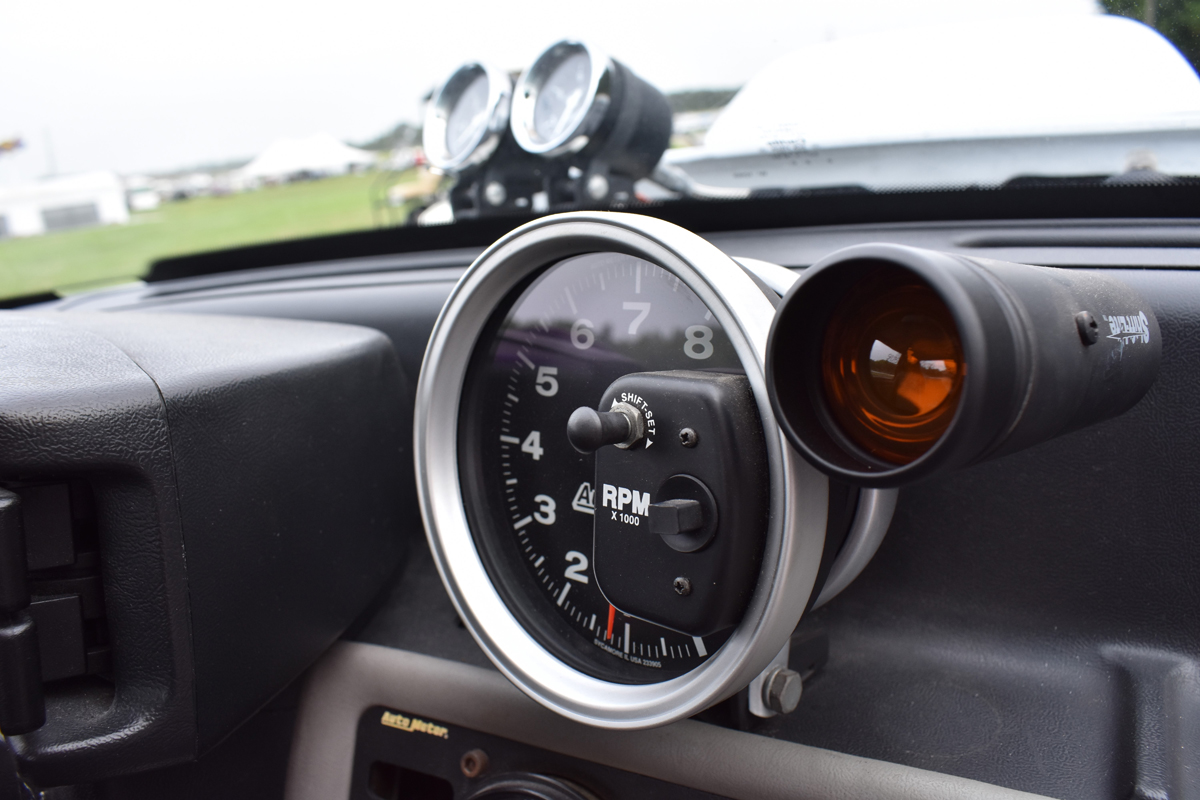 Was it everything I expected?
The weather was really hot, we missed a whole day of testing because water was seeping up through the track, I could not cut a good light, and I had a hard time staging the car consistently. In the midst of a heat wave, we experienced an out-of-the-blue typhoon which left us scrambling to secure our belongings that were exposed. In this frantic rush, while Amy was slamming the rear hatch down on her 4-Runner, Gracie ran straight into the gate as it slammed down on her head, resulting in an all-Saturday-night visit to the emergency room with a sustained concussion. We got very little sleep, I won the first round only because a good friend who I was facing on the ladder in the first round hurt his engine and couldn’t make the call. I lost in the second round by having a terrible reaction time, and I ran about as close to my index as Pluto is to the Sun.

When you are dreaming about your return to racing after 15 years, you have thoughts of what it would be like if you ended up in the Winner’s Circle after the first race. Nice thought, but I was enough of a realist to know what I was up against. I was in a car that I had barely tested so this race was critical for me get insight on how to make my car better. With the current configuration, the car has some shortcomings and the greatest one is probably the nut who is driving it! To say that I am rusty would be an understatement. 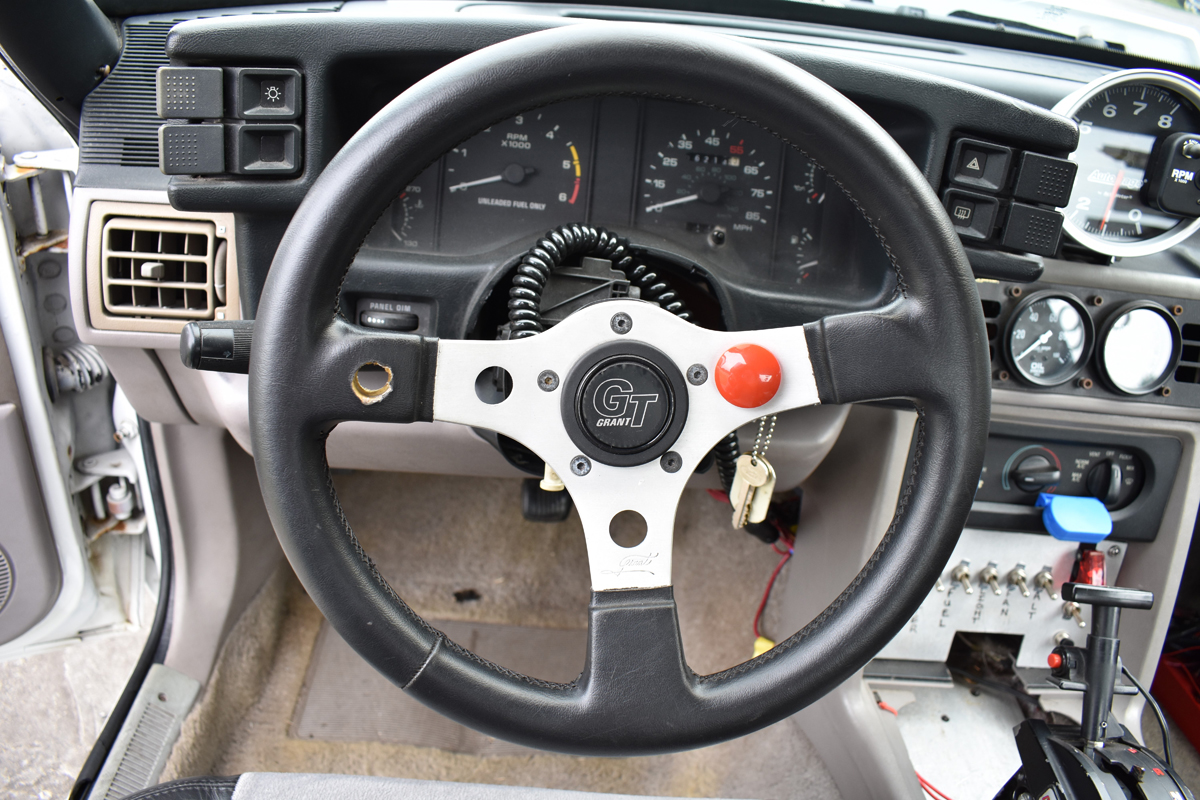 Having said all of that, it was four days of heaven. I could have never imagined how good it would be to be back to racing. The folks from Promedia NMRA/NMCA were terrific and they ran a great race. People were just so good to me and I could tell that friends were glad to see me back at the track. I hope they could all see on my face how happy I was to be back. After Day 1, I remembered why I loved racing and it was not just the car and the track…it was the people.  The racers in Open Comp were welcoming to me and encouraged me to come back and support the class. In the course of this whirlwind, I even had the pleasure of working with my long-time buddy, Keith Keplinger, as he was shooting pictures of the car for this article. When he found out Gracie was interested in photography, he took lots of time to show her tips for her camera and shooting photos which made her so happy.  Being at the race this past weekend was like coming back home to my racing family. 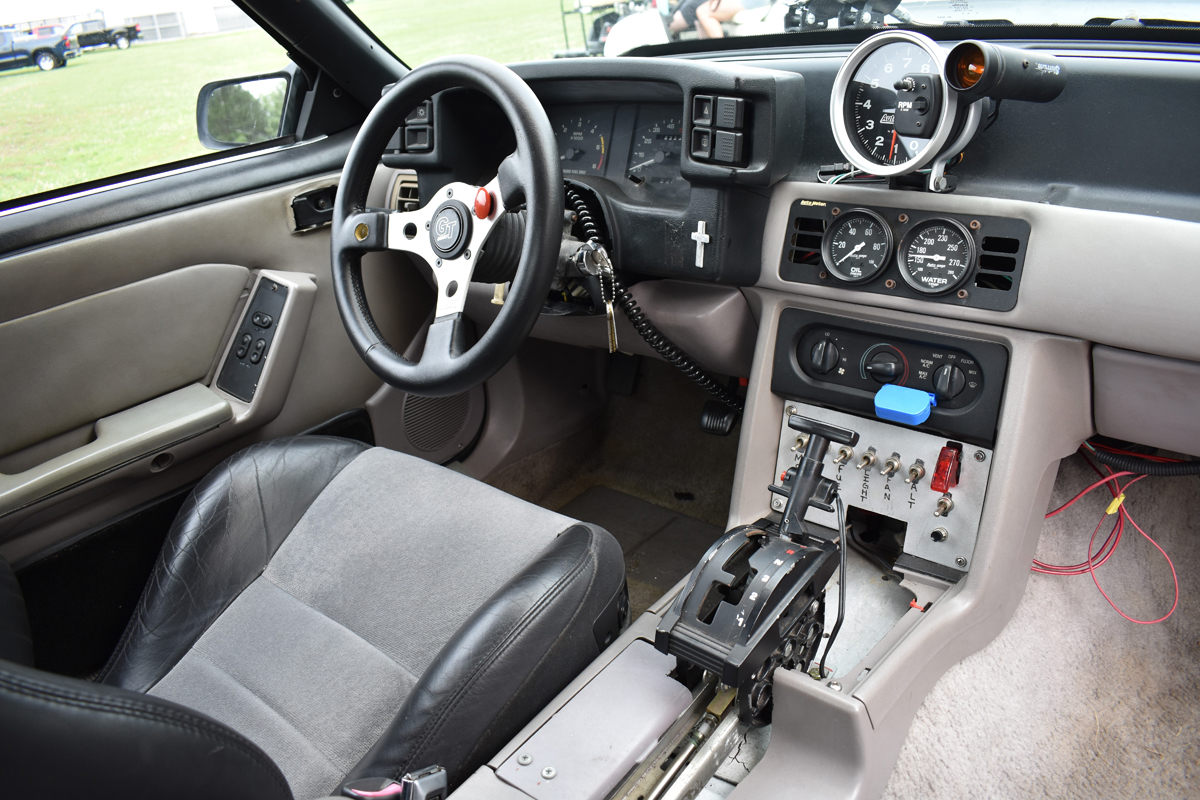 On Saturday, I had the pleasure of having Steve Ferguson show up and offer invaluable advice, along with Logan Moore who also offered insight. Previously, I had always used a trans-brake to stage the car. Danny Towe and Shane Williams both gave me tutorials on how to stage the car with the foot brake and line-lock, which helped with staging the car.

Having my car back in Bob Basenberg’s garage to be worked on has been great too. His statement to me after looking at the car was expected if you know him, “I think this is a great car, but I think I can make it better!” Great friends like Gary “Hollywood” Parker and his wife Carole “Mrs. Hollywood” Parker, Charlie McCulloch, and Shane Williams have continued to encourage me for 15 years to come back and race.  This always fed my desire to return so I could be back at the track with them. This weekend was a very happy homecoming indeed.

“I think this is a great car, but I think I can make it better!”

Thanks to Chuck and Joseph Lawrence, Jim Bremer and Brian Sanford, as well as many others for all of the advice and answered questions over the past few months. Driving out of the track, after losing to the only car you really raced, would not seem to be something to be excited about – but I am excited.  I have hope. When you go to a place you love, do something you love, and be with people that you love, it just cannot get any better! I look forward to working on my car and my ability to drive it more this year so that I am prepared to return for the full season next year! 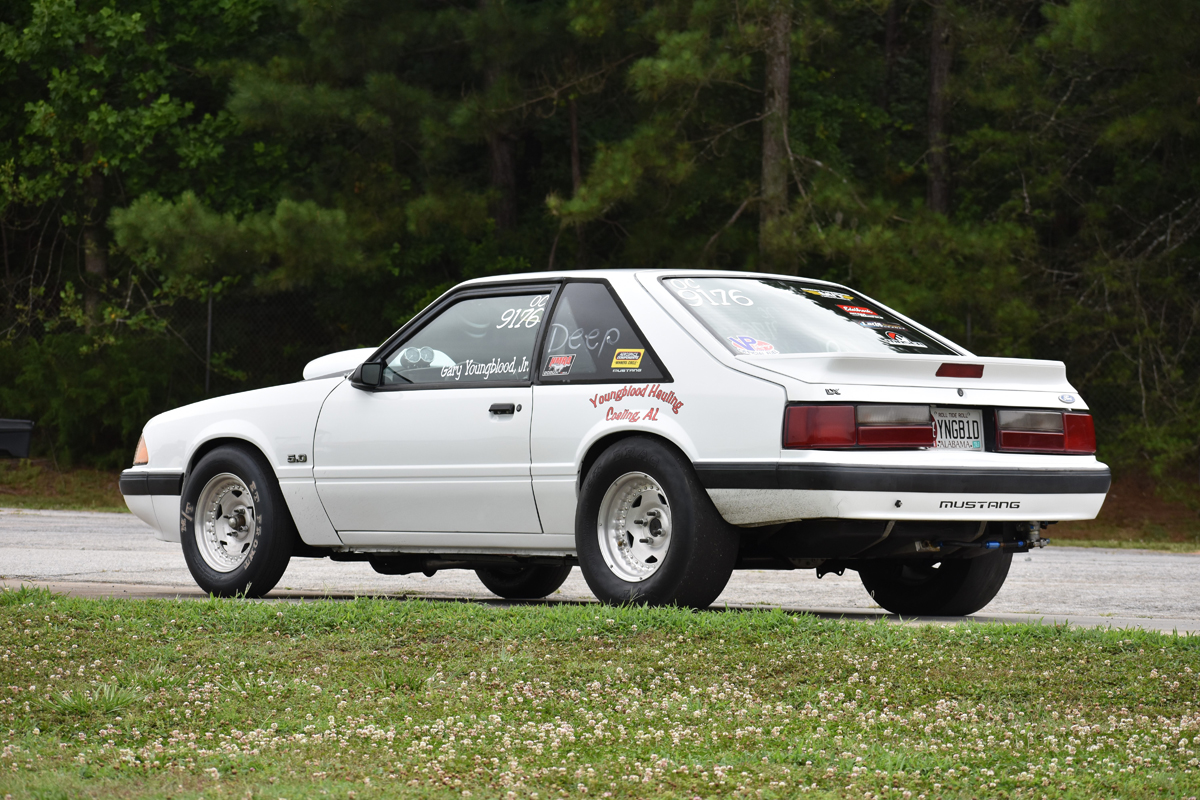