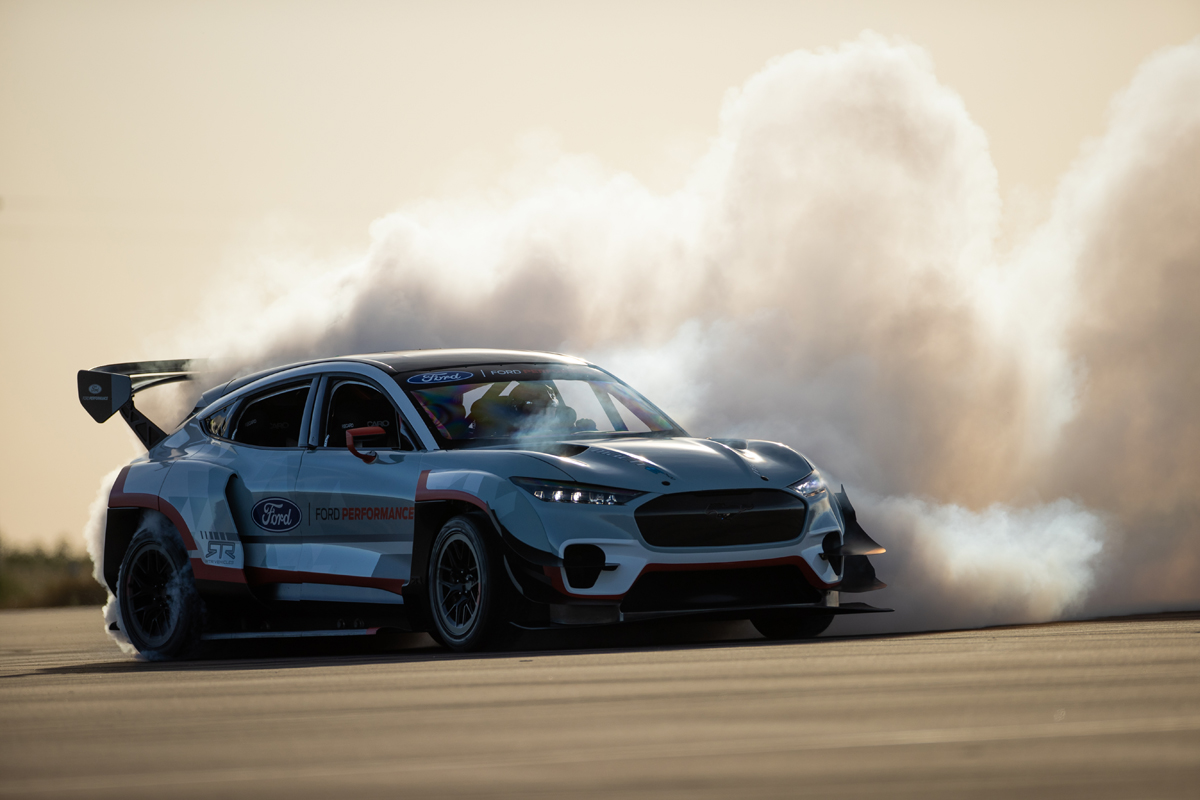 “We are leaning into electrification big-time at Ford, spending over $11.5 billion on electrification and we are doing that with all of our iconic vehicles. Whether it is the F-150, the Mustang, or the Transit, these are all the vehicles that people know us for around the world,” Dave Pericak, Global Director of Ford Icons, explained. “We are leaning into that big time, because that’s where we excel. Whether it is play with the Mustang or work with the F-150, we are going to take electrification and we are going to show how it can enhance those experiences and get you a better product at the end of the day.” 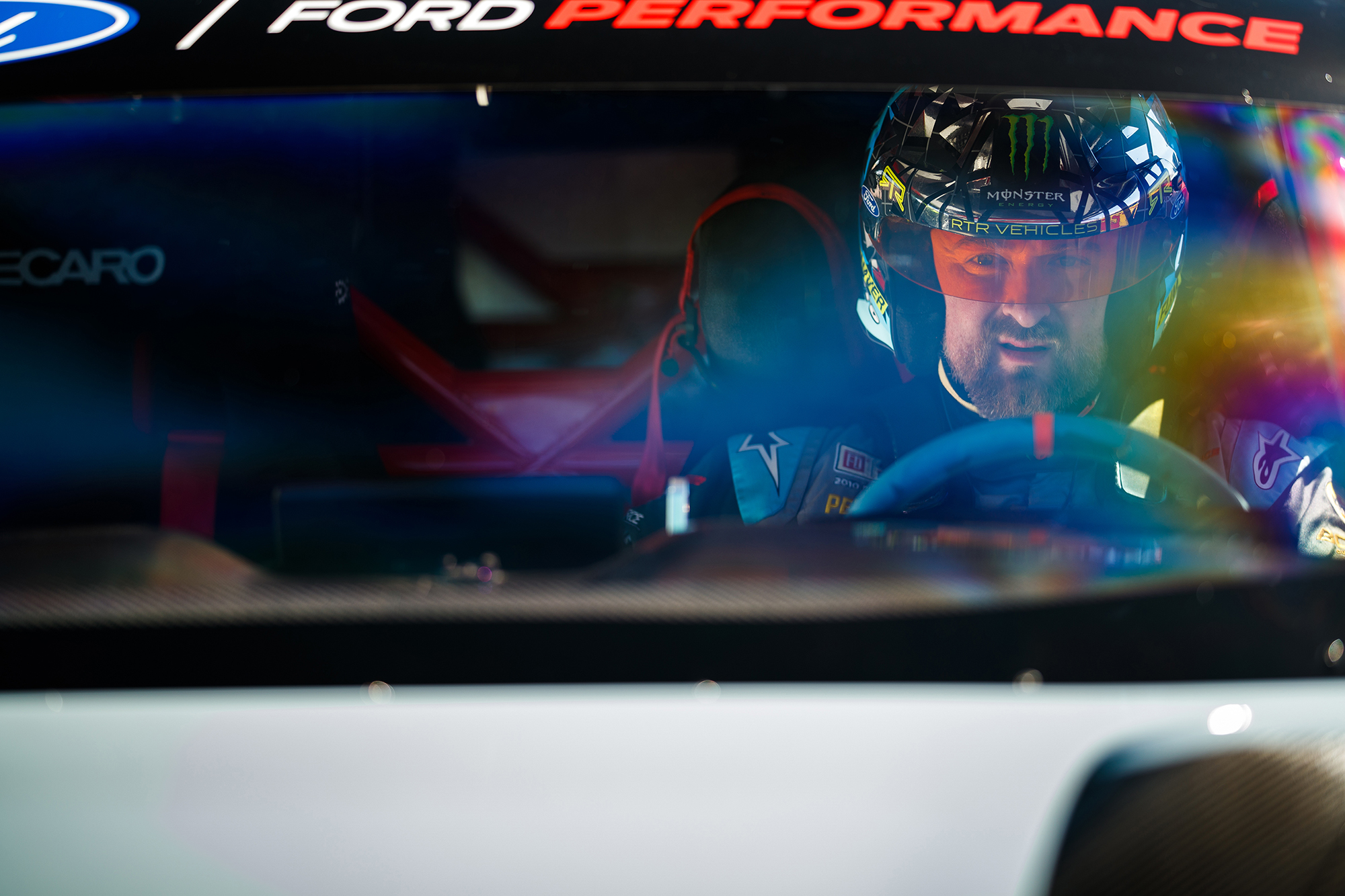 Ford Performance joined forces with Vaughn Gittin Jr.’s RTR Vehicles to turn a Mustang Mach-E body in white into an automotive decathlete. The two outfits collaborated for 10,000 hours in development time to end up with this concept. 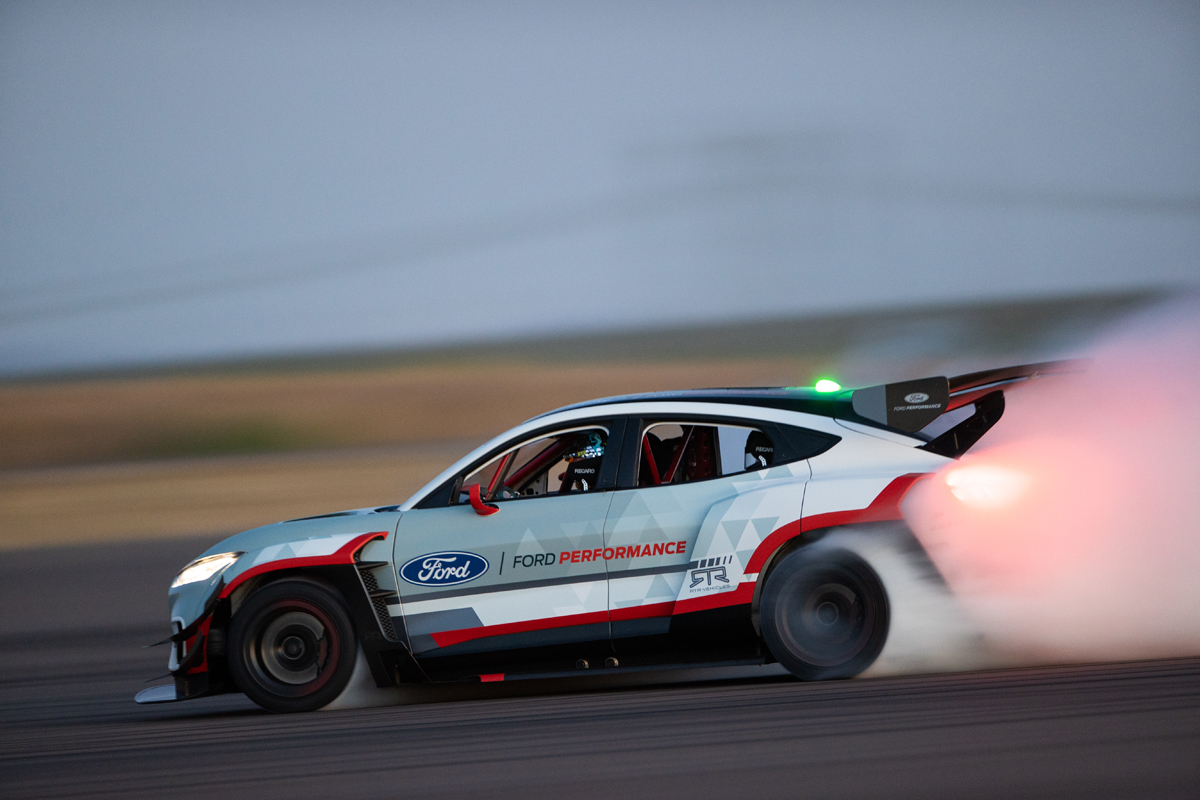 Ford Performance unveiled the latest in its salvo of all-electric performance concept cars, the Mustang Mach-E 1400, a 1,400 horsepower, all-around performer designed to show what is possible with an electric powertrain 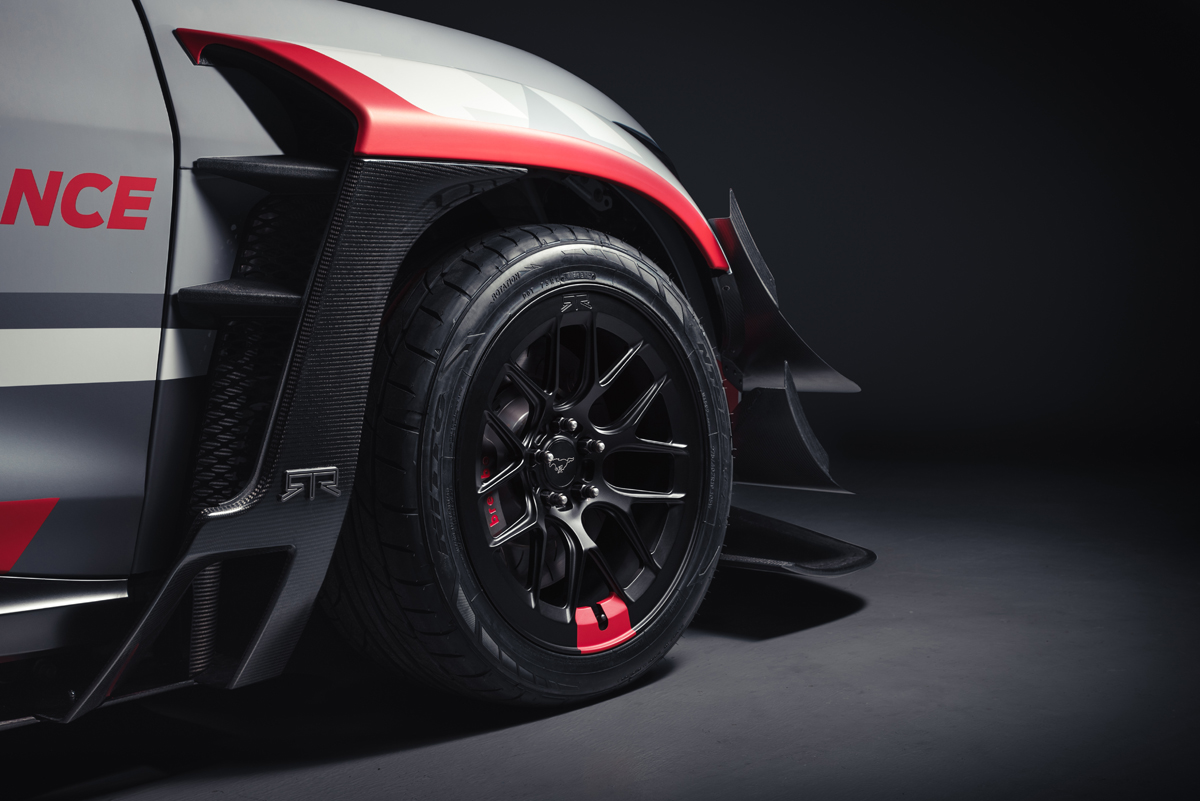 ABOVE & BELOW: A crucial piece of the Mustang Mach-E 1400 performance puzzle is the aerodynamics. Using a flat floor, belly pan, a huge rear wing and more, it achieves 2,300 pounds of downforce at 160 mph. 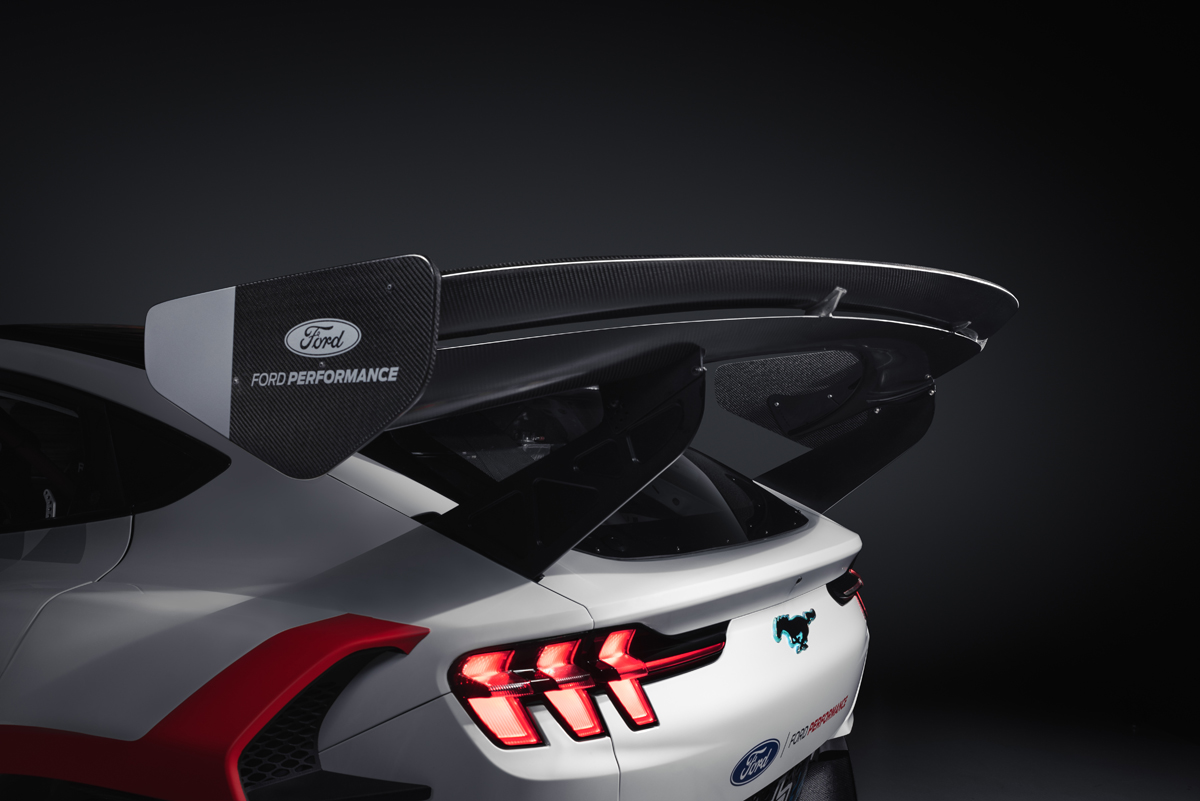 Performance projects and racing machines are definitely some of the engineering exercises allowing Ford to improve its vehicles. By pushing both the hardware and the development tools to the extreme to find more performance, the strengths and weaknesses of the tools and products are revealed in an instructive manner.“

We went and talked to our friends at Ford Performance and said, ‘Hey, we have an idea.’ And they said ‘Funny you should say that, because we have an idea,’ and that’s where it began.”
– Vaugn Gittin Jr.“

We really wanted to show what the Mustang Mach-E platform, and electric vehicles in total, are capable of,” Mark Rushbrook, Global Director of Ford Performance Motorsports, told us. “Part of our mission in motorsports is to align to our road cars’ cycle plan and help with telling the story and the products, but it is also about the innovation and the tech-transfer to make those products even better.” 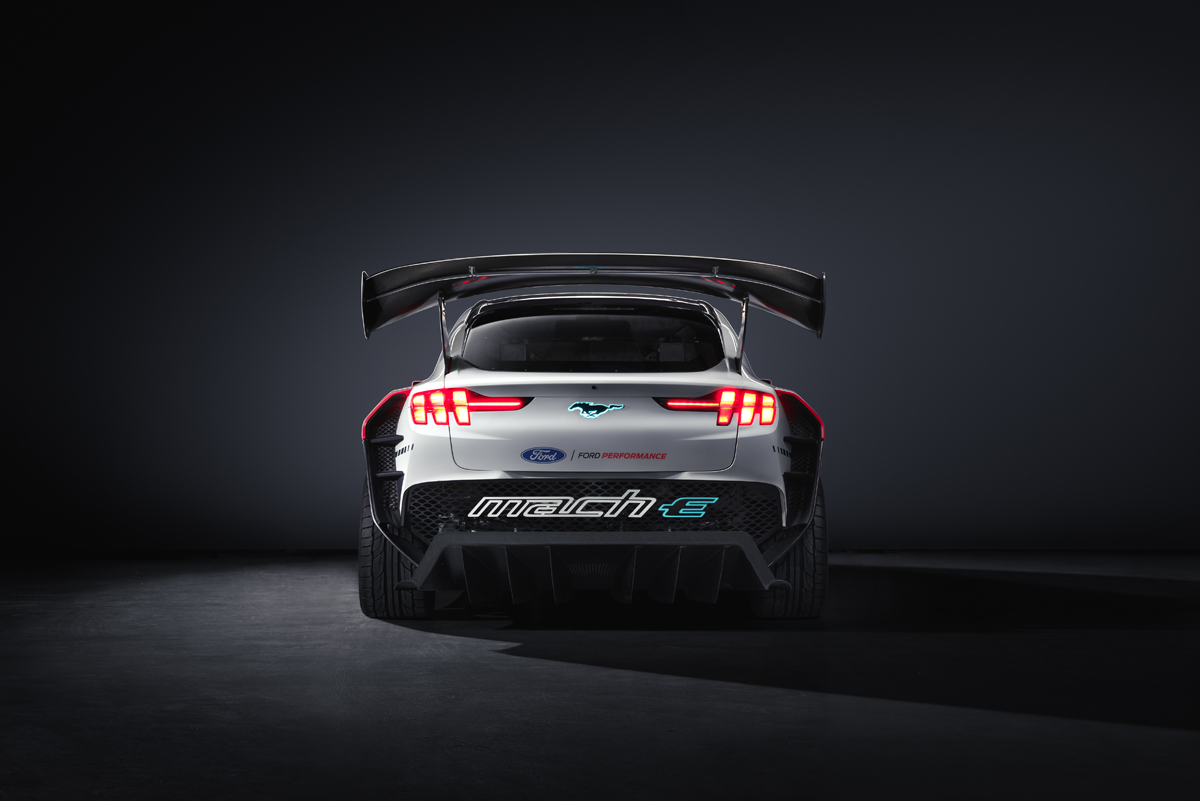 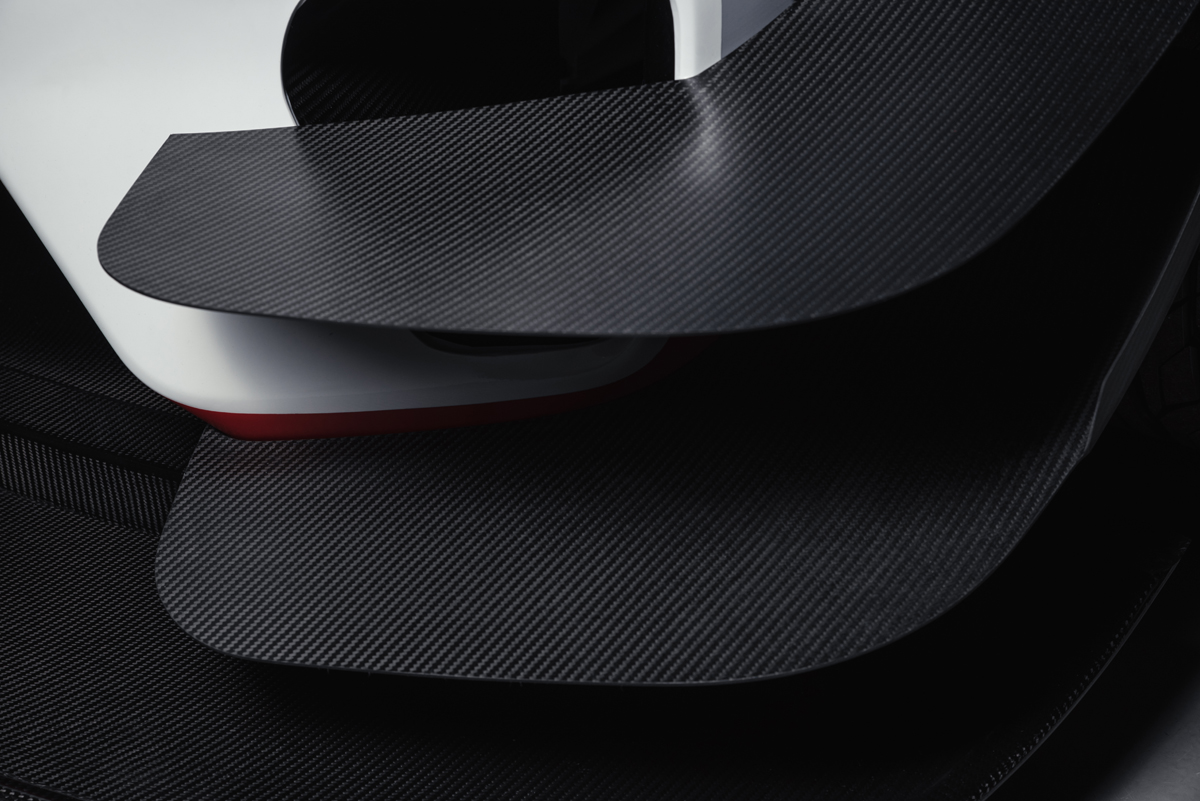 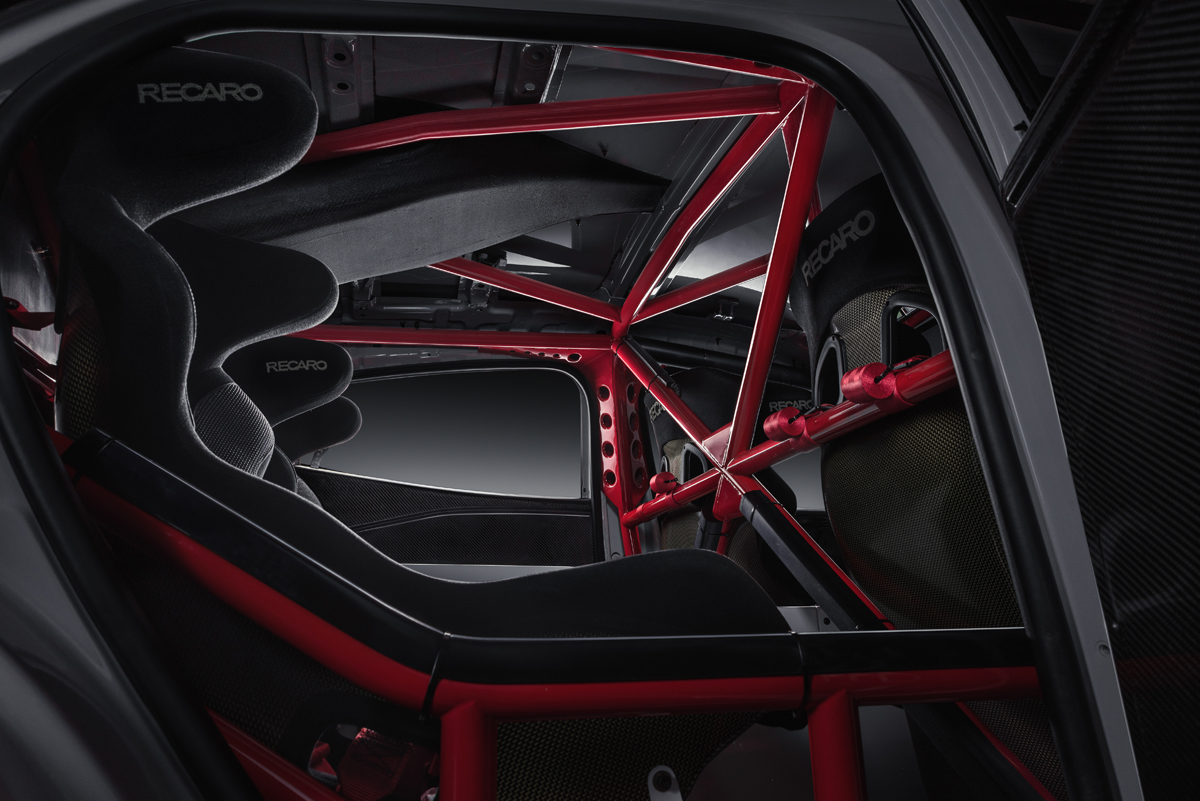 ABOVE & BELOW: Designed as a true demonstrator of electric performance, the Mustang Mach-E 1400 not only has plenty of safety gear, like harness belts and a roll cage, but it also features four seats so three people can go with a pro driver on the electrified thrill ride of their lives. Sign us up! 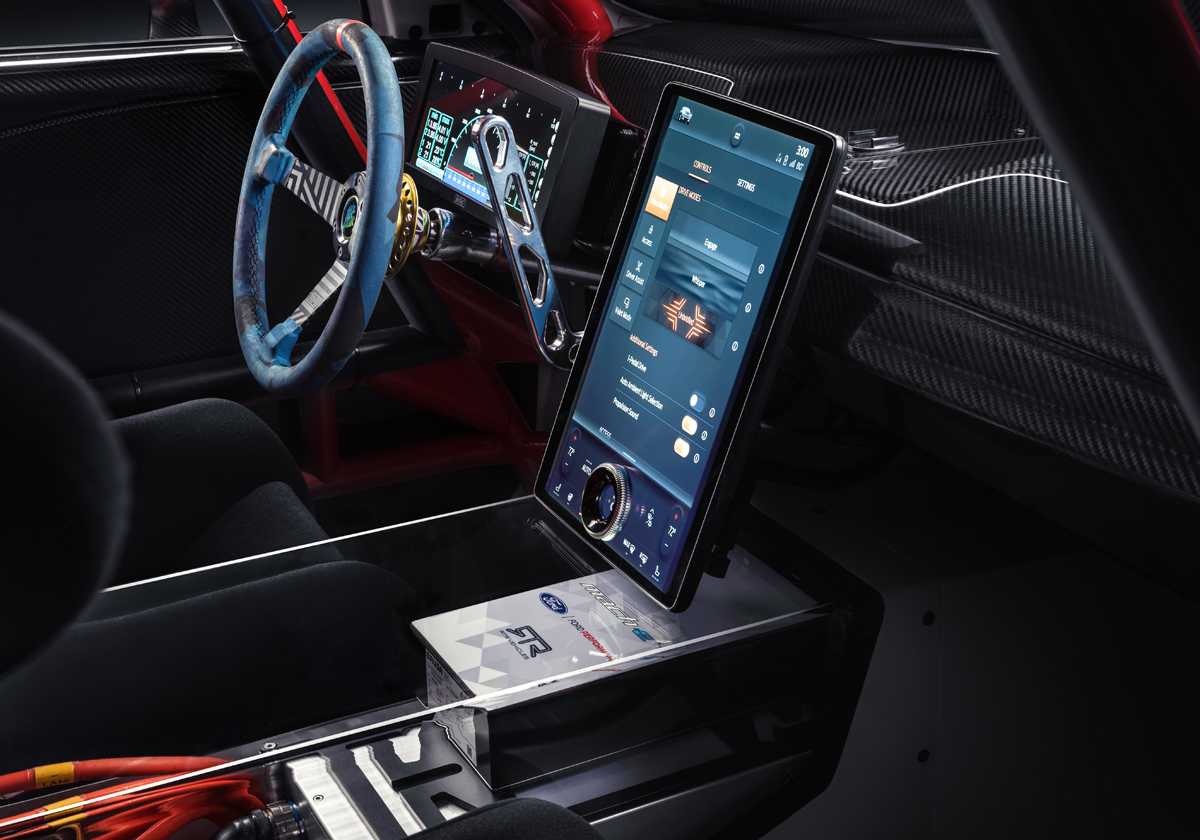 While it can do it all, RTR Vehicles had to imbue the Mustang Mach-E 1400 with the ability to perform in Vaughn’s favorite pastime — drifting. As such, it features an electronic brake booster that enables regenerative braking along with ABS and stability control integration. The Mach-E 1400 wears big Brembo brakes, and is equipped with a hydraulic handbrake that works with the powertrain to turn off power to the rear wheels so Vaughn can get slideways.

To help push the Mach-E platform to an eye-watering level, Ford Performance turned to one of its familiar partners. RTR Vehicles, led by drifter, off-road racer, entrepreneur, tire slayer and professional fun-haver, Vaughn Gittin Jr., lent its expertise in performance, styling, and rapid development.“ This is one of those projects that’s kinda like a fairy-tale collaboration to me. I have been watching and been very interested in electric technology as it really started coming into the mainstream,” Gittin said. “For a while, the technology was not ready for a project like this. As soon as we realized the technology was ready, we went and talked to our friends at Ford Performance and said, ‘Hey, we have an idea.’ And they said ‘Funny you should say that, because we have an idea,’ and that’s where it began."

From that meeting, the two parties agreed to put their heads together to re-imagine the standard Mustang Mach-E as a do-it-all performer. Its prowess is on full-display in the video, where it puts its seven onboard motors (five more than the street-going Mustang Mach-E GT) and 1,400 peak horsepower to work, on-track with its performance cousins, driven by an all-star cast of Ford Performance drivers, including Gittin, Ken Block, Hailie Deegan, Chelsea Denofa, and Joey Logano. 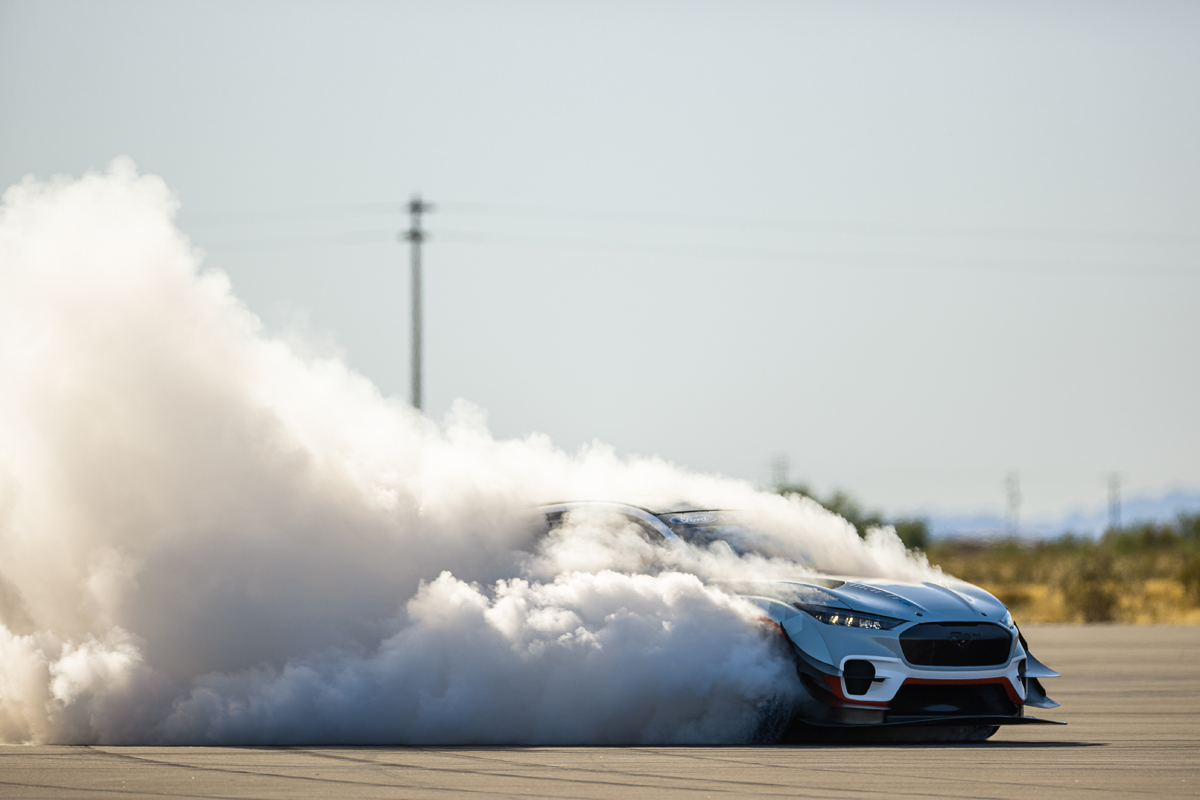 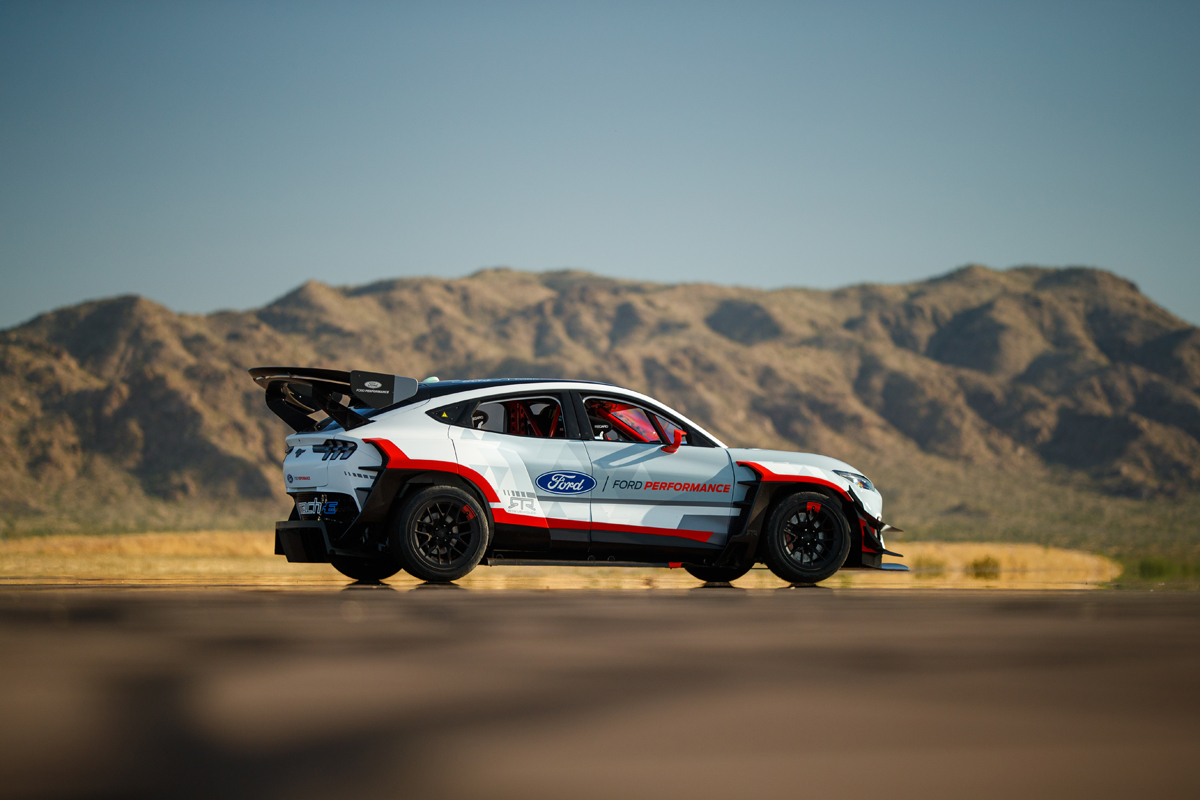 To that end, Ford Performance engineered the chassis and powertrain with flexibility in mind. Control arms are swappable, and steering angles adjustable, while the powertrain can toggle between all-wheel, front-wheel, and rear-wheel drive. As such, power can be split evenly (front and rear) or biased totally to one end of the Mach-E 1400, depending on its mission.

“The challenge was controlling the extreme levels of power provided by the seven motors,” said Mark Rushbrook, Motorsports Director, Ford Performance. “Mustang Mach-E 1400 is a showcase of the art of the possible with an electric vehicle.”

A huge part of making that happen was dialing in the aerodynamics for both brake cooling and downforce. Much like Ford Performance did on the Ford GT program, the aero development was crucial to delivering envelope-pushing performance. As a result of development in the virtual world, the Mustang Mach-E 1400 benefits from 2,300 pounds of downforce at 160 mph. Yeah, you read that right.

“It was all about airflow management to generate as much downforce as we could underneath the front of the car and balancing it with the rear wing to get the right front-to-rear balance,” Rushbrook said. “We used our standard computational fluid-dynamics tool, run by our engineers in concert with the studio and Vaughn’s team, to iterate on the design, shape, and what parts could be made to look and perform great. We’ve got a lot of downforce in the car, which was important for what we wanted this car to do, especially on the road course.” 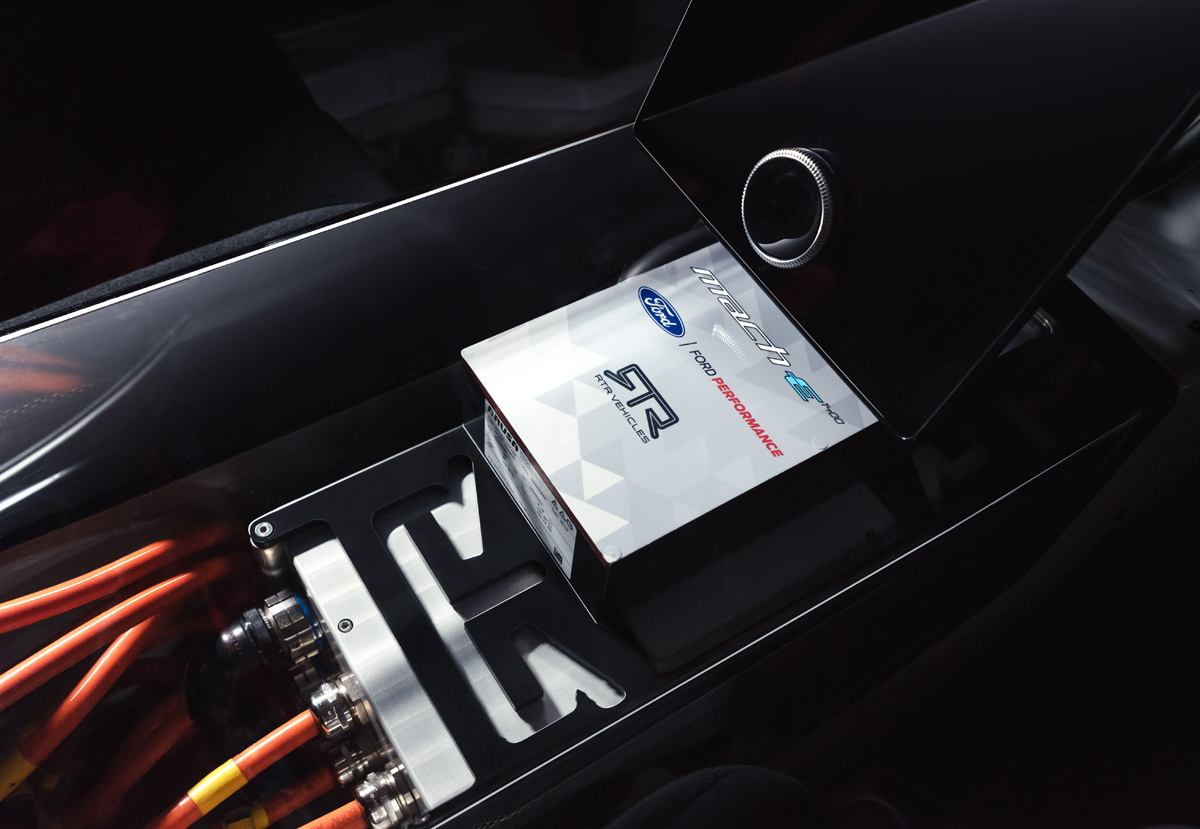 Harnessing that much power meant pairing a 56.8-kilowatt-hour battery, featuring nickel-manganese-cobalt pouch cells, with controls and support hardware to deliver performance for a chunk of time. It also meant mitigating the downtime needed to recharge the Mustang Mach-E 1400 by cooling the battery during charging with a dielectric coolant.

“We can roughly get 80-percent charging time in less than an hour, which is an important part of what this car is because we want to demonstrate it to people. We don’t want to just make one run and have it charge the rest of the day and do another run at the end of the day,” Rushbrook said. “The plan is having three people rotating through the car at one time. We can run the car through demonstrations for about an hour, charge it for about an hour, then put another group of people through the car in about an hour, and do that all day long. By circulating the coolant fluid during charging, it reduces the charging time required.

”Clearly, this one is meant as a true demonstrator, showing people just what an all-electric powertrain can do in a performance environment. It joins the Mustang Cobra Jet 1400 concept, which debuted a few months back, in the Ford Performance stable. While both battery-powered machines are built for speed, they intentionally don’t share any hardware. 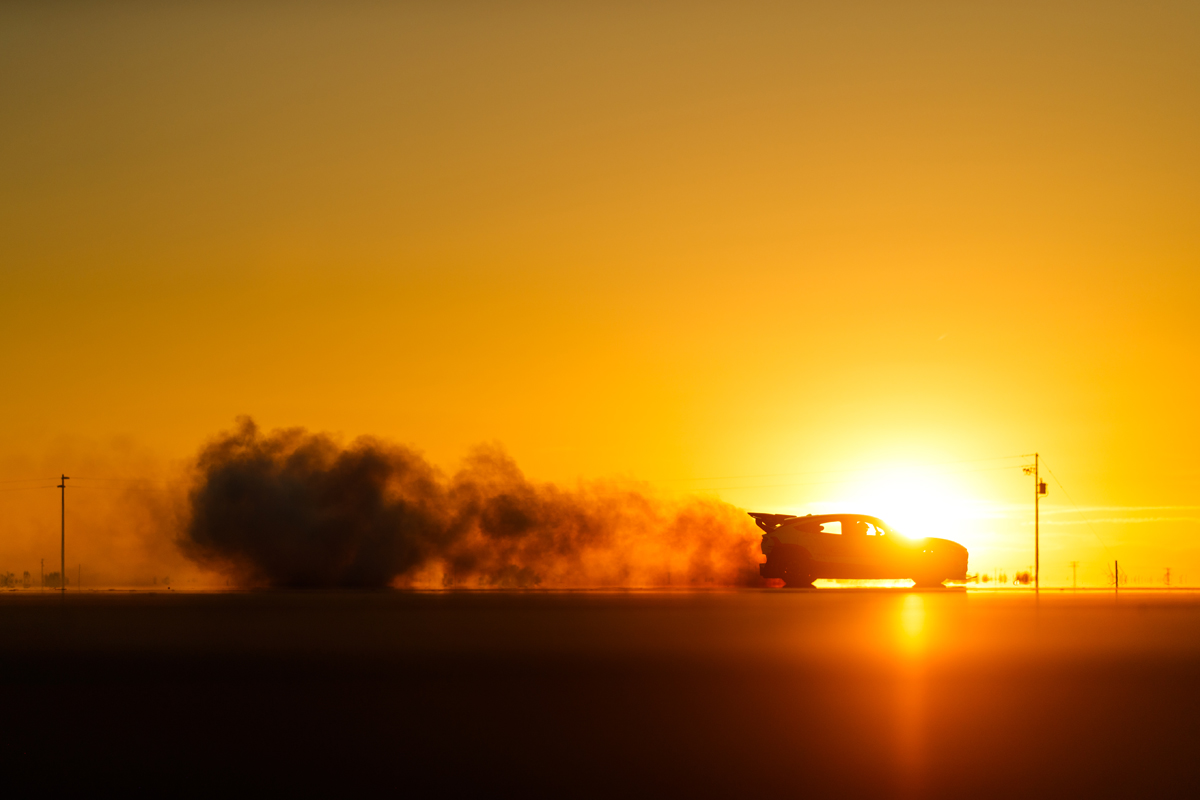 It seems vehicles like this are here to stay, but if some of them can be like the Mustang Mach-E 1400, the future definitely looks electric.
advertisement

The results of this partnership with RTR Vehicles is certainly dazzling, but they are, perhaps, most impressive to the company’s chief Fun Haver. Despite having inside knowledge of Ford Performance and its vehicles for many years, this project really took him by surprise. “You know I have been working with Ford for like 13 years, and frankly, I thought I knew about the capability and experience in those buildings, but their expertise and commitment to being the best in this space, and taking it head-on in a new way, is way beyond what my expectations were,” Gittin added.
‍
Building The Powerhouse

While it impresses in the video, the Mustang Mach-E 1400 must be out of sight in the real world. The car will make its public debut at a NASCAR event in the near future, but the real story is what it feels like when you are strapped into one of those four seats. Gittin describes the Mustang Mach-E 1400 as a magnetic roller coaster, which certainly sounds like a blast, while Rushbrook has yet to experience it, but he is tantalized by the prospect. “I personally have not been in it yet,” he confessed. “I can’t wait until I can get in it, but every single person that has — and we’ve got this on video — gets out of the car giggling because of how ludicrous the performance is. I can’t wait until I get in it. I can’t wait until you get in it. It’s going to be great. People that are used to high-performance cars get out of this thing and say ‘Wow!’ It just knocks their socks off.”

“Because we are learning as much as we can about these full-electrified powertrains, we didn’t want to simply replicate the same system in two different vehicles. We wanted to intentionally work with different partners and hardware to maximize our learning. They are different, and they are different in their purpose,” Rushbrook said. “The Cobra Jet 1400 is one-dimensional in the sense it goes drag racing and it goes really fast down the drag strip, but it is not going to go around the road course and we are not going to go drifting with it. The systems are intentionally different because of their intended purposes, but also to maximize learning with two different sets of partners.