Text and Photos  |  Steve Turner
It might have been just another surprise party with A large crowd of people waiting behind a shop door. The guests of honor arrived out front and exchanged hugs with the host and The master of ceremonies was none other than Founder and President of Late Model Restoration, Shannon Guderian.
The surprise wasn’t just the people in hiding, however, and the centerpiece was no cake. It was a full resto-mod version of one of the most unusual Foxes ever built. This ASC McLaren, based on the 1985 Mercury Capri, is not only the cousin of the popular Fox Mustang but one of the rarest versions. It had once been the apple of Shannon’s eye and after he bought and sold it a couple of times, it became his uncle Ted Vaughn’s reliable daily driver for over a decade. However, this was one of the cars that helped fuel the young Shannon’s fire.

“I was driving a dinosaur ’65 coupe in high school. Between getting beat up by an ’85 GT and winning a lucky repo bid on a ’79 Indy Pace Car, it just seemed like I should graduate to a newer generation,” Shannon explained. “So I stuck my five-speed and 302 power from the ’65 into the Pace Car. The next real encounter with a Fox was when a close friend named Jeff Harris inspired me with his SVO. I was hooked from then on.” 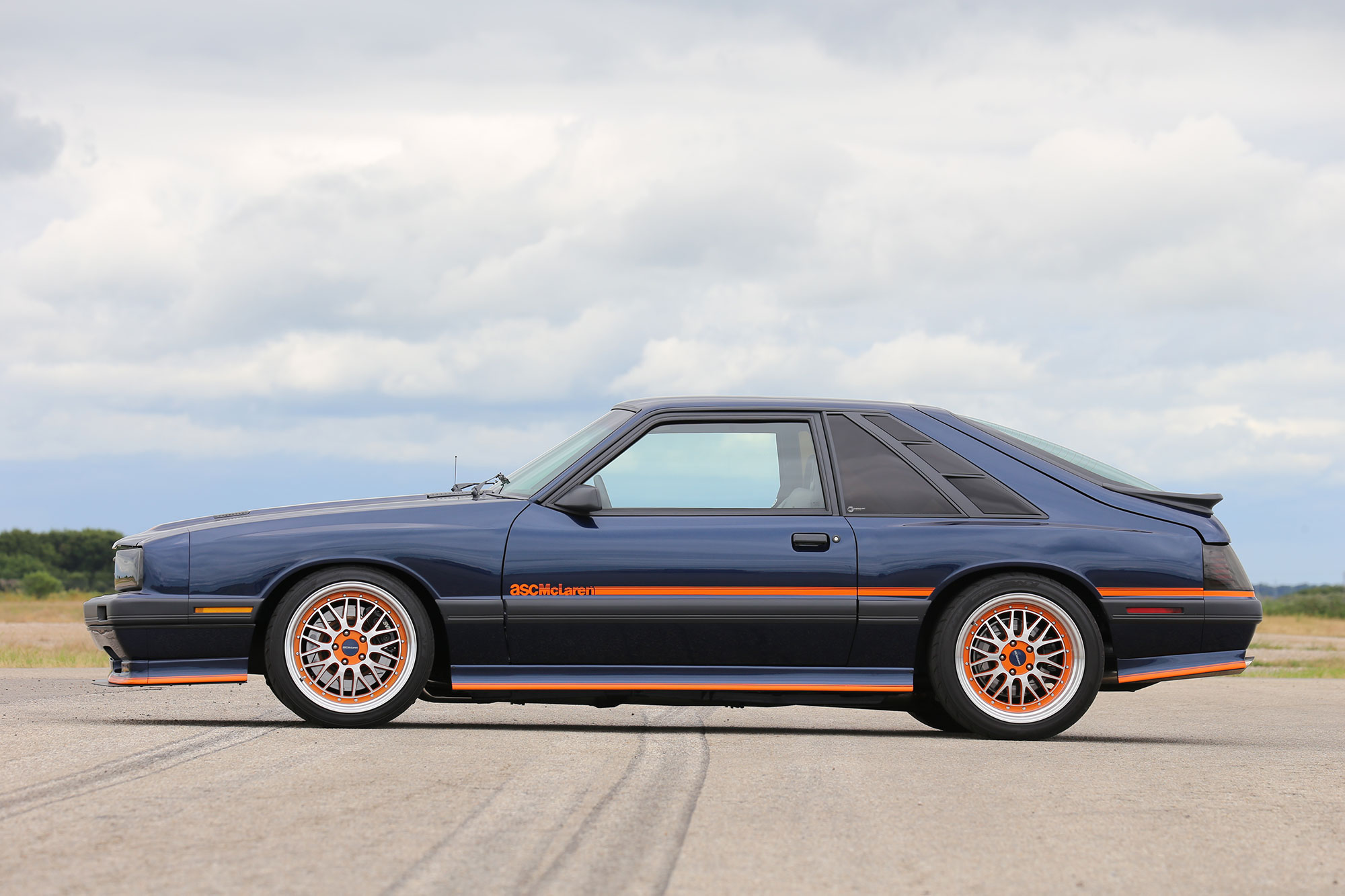 ABOVE: There are only about 18 parts left from the original car. Most are now stock-replacement or improved hardware, including the engine. Gone is the pushrod 5.0-liter engine and in its place is a Gen 2 Coyote 5.0-liter powerplant backed by a TREMEC T-56 six-speed manual transmission and an 8.8-inch rear end.

How many times have you yearned for a car that sparked a passion in your soul? It might be a new super machine or it might just be the next project car you could slowly build into your dream machine. It is that quest, which led to the fruition of this project and the creation of Late Model Restoration, a company founded on the love of restoring and resto-modding Fox-platform machines.

“The first time I purchased the ASC, it was missing all the ground effects including the front lower air dam and pushing the 80,000-mile mark. I drove it for a few years and with a little insurance money, called up Hank (Huisman) and ordered the missing items,” Shannon said. “Uncle Ted sprayed it for me. I stuffed an 8.8 and a new motor in it. A close friend came along who had always loved the car and I couldn’t pass up $9,000 at that time.”

We have all been there. The car is great. It is a lot of fun, but at the time cash is a little more important. We almost always regret the sale later. Some are lucky enough to get a do-over, but Shannon had a few chances with this car.

“After starting LMR, I actually purchased the car again several years later for $1,800. It suffered a long, hard life of mishaps with the other two owners after my original sale. Then, I sold it a few months later. Lo and behold, a couple of years go by and I get that call again,” Shannon added. “So $1,250 buys it out of a barn after they had given up on the idea of putting a naturally aspirated big-block in it! Uncle Ted and I put a used motor in it and he winds up with it. Yes, I bought this car three times and sold it twice! Yet I managed to keep it alive and drive it for many years.” 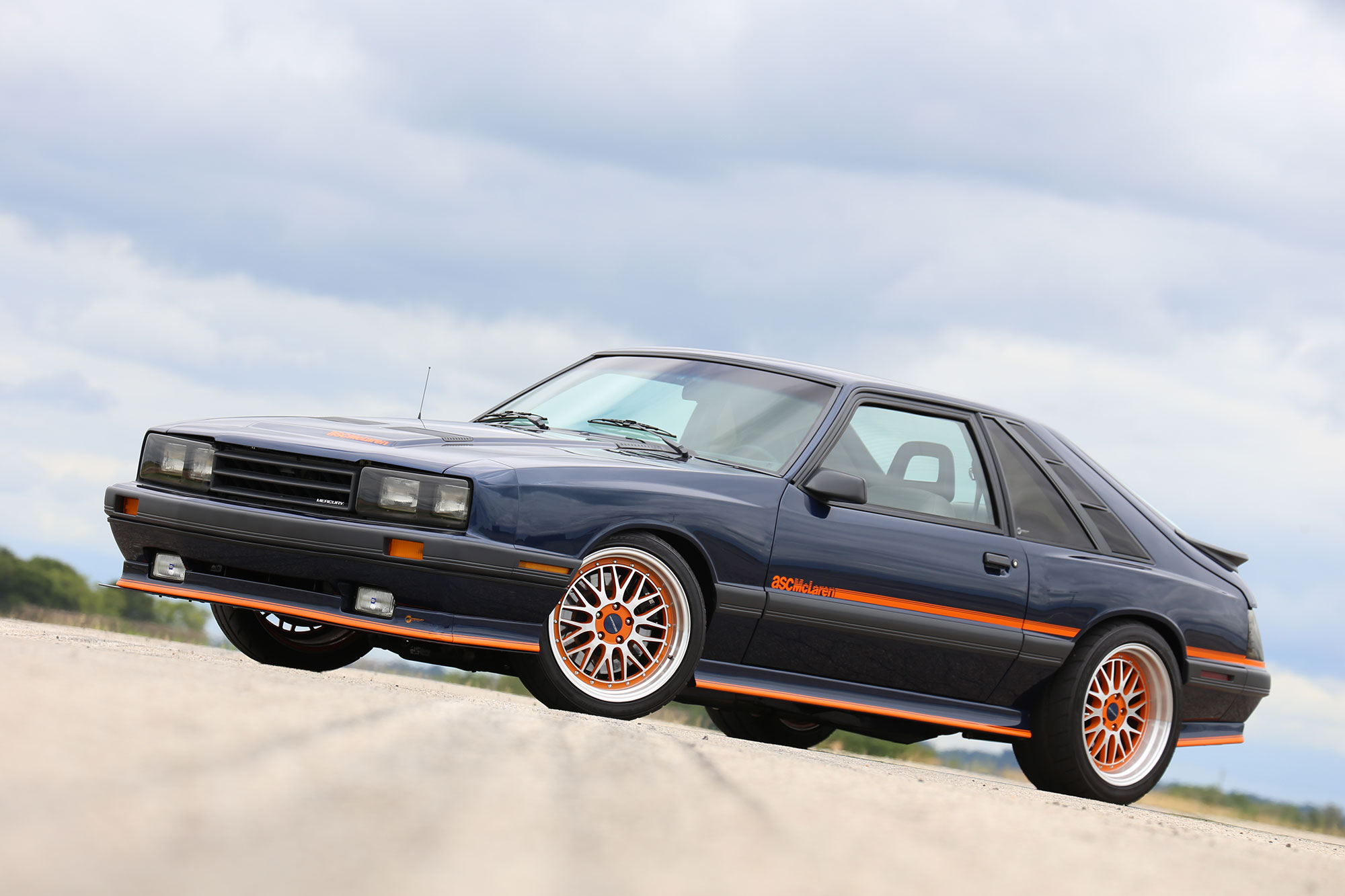 This is Project Mercury Rising, a 1985 ASC McLaren based on the Mercury Capri that Late Model Restoration Founder and President, Shannon Guderian resto-modded for his uncle Ted Vaughn. 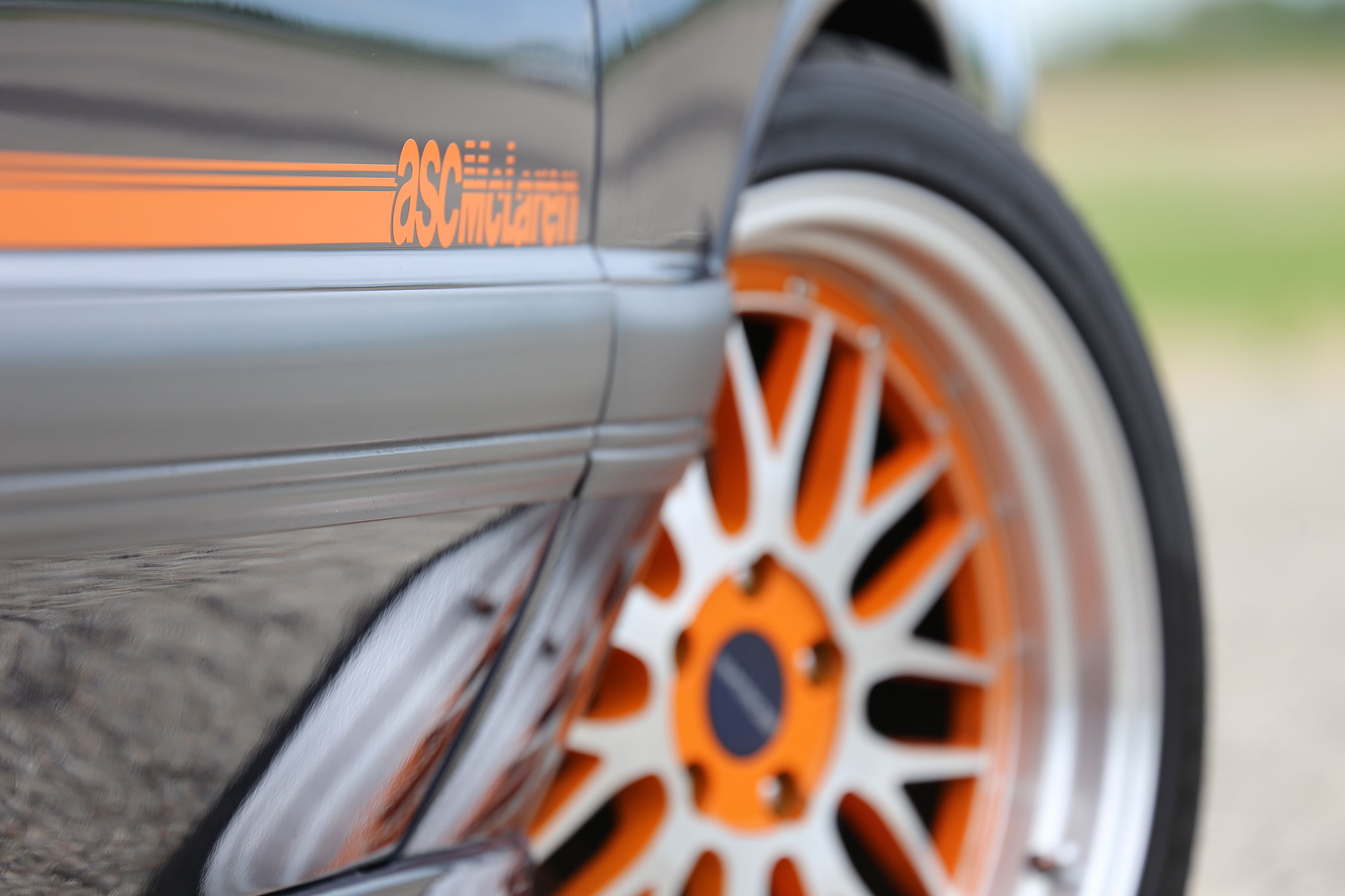 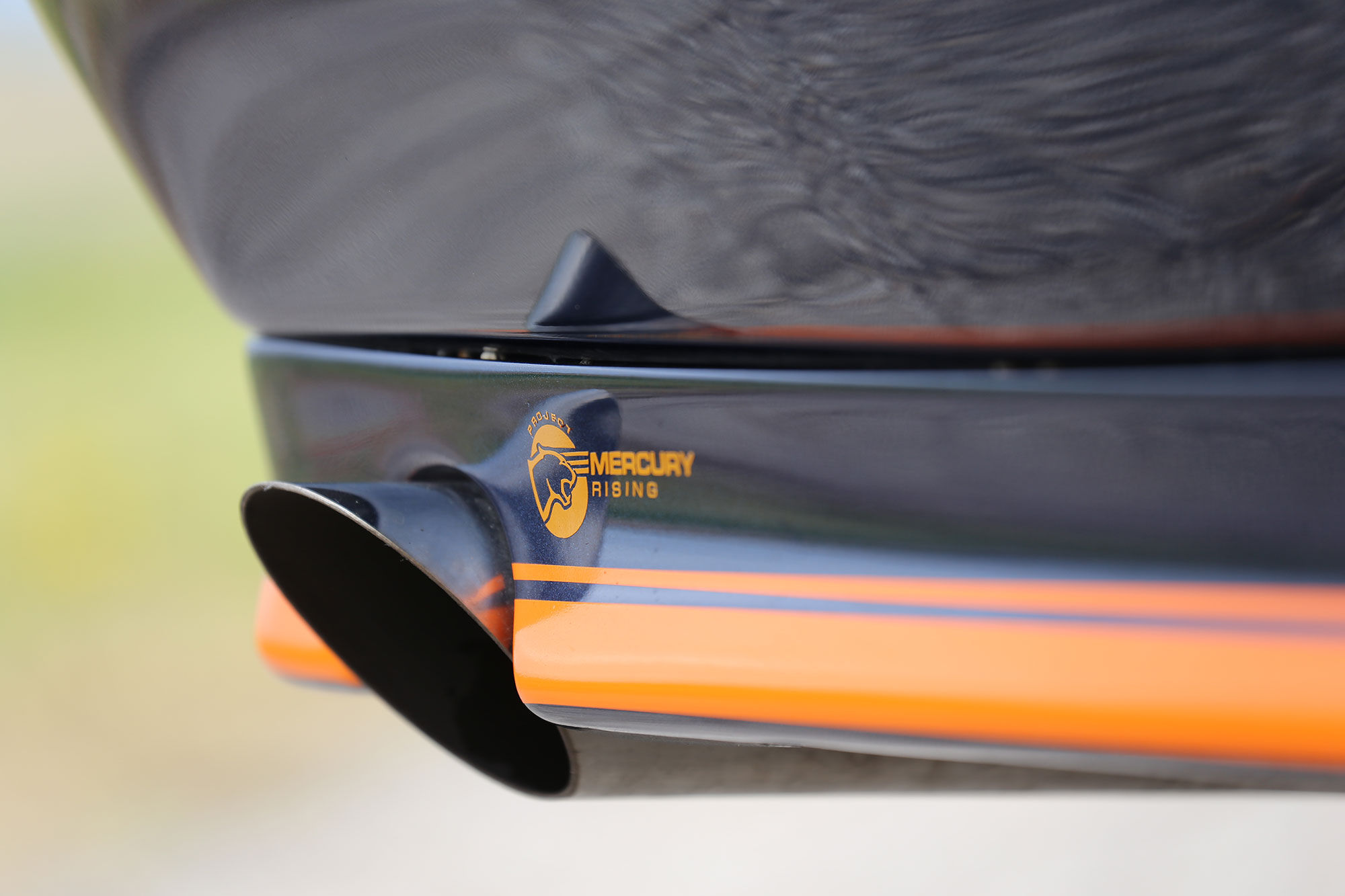 “The decision to restore this car for the last time was primarily motivated by the opportunity to do something that would change Ted’s life and mine as well,” Shannon said.

After handing the car over to Ted, this rare Fox served as a daily driver. He loved its responsiveness and performance. However, after years on the road, it was time to park it and work toward restoring it again one day. Eventually, Shannon decided to help that process along without letting Ted in on the idea. He did enlist his uncle to help tear down the car with the idea that they would get to it one day.

That day would be about two years later, because Shannon didn’t just swipe a card and have a shop do all the work. He opted to do much of the work himself with a little help from friends and the crew at LMR. The project was not only a labor of love, it is also the embodiment of his company’s ethos.

“I wanted to challenge myself in a way I never had before and prove that our company is truly built of real enthusiasts from top to bottom as we proclaim in our marketing”, he said. “I really wanted to test the systems LMR had worked so hard to develop over the years. Building the car in my home shop would really allow me to perform the tests, hide the car from Ted, and allow me to experience what most, if not all, our customers do on such a project. For the record, I logged 2,600 hours myself and the total build took just under 4,000 hours!”

Dubbed “The Hideout”, his home shop served as the home for the project during all those hours. The car only left twice for bodywork and paint. After Ted, Shannon, and crew stripped it down, it secretly went to C&C Collision in Waco, Texas, for media blasting and chassis repairs. They fixed the cracked floorboards and replaced the frame rails and core support. The body shop also added a set of LMR smooth fender aprons in place of the factory units. Later it would travel to JR's Custom & Collision for multiple coats of Midnight Blue.

ABOVE: Inside Mercury Rising looks like it just rolled out of the factory, thanks to a litany of LMR restoration parts and reupholstered seats.  BELOW: This car is definitely one of one, and the dash plaque makes it official. 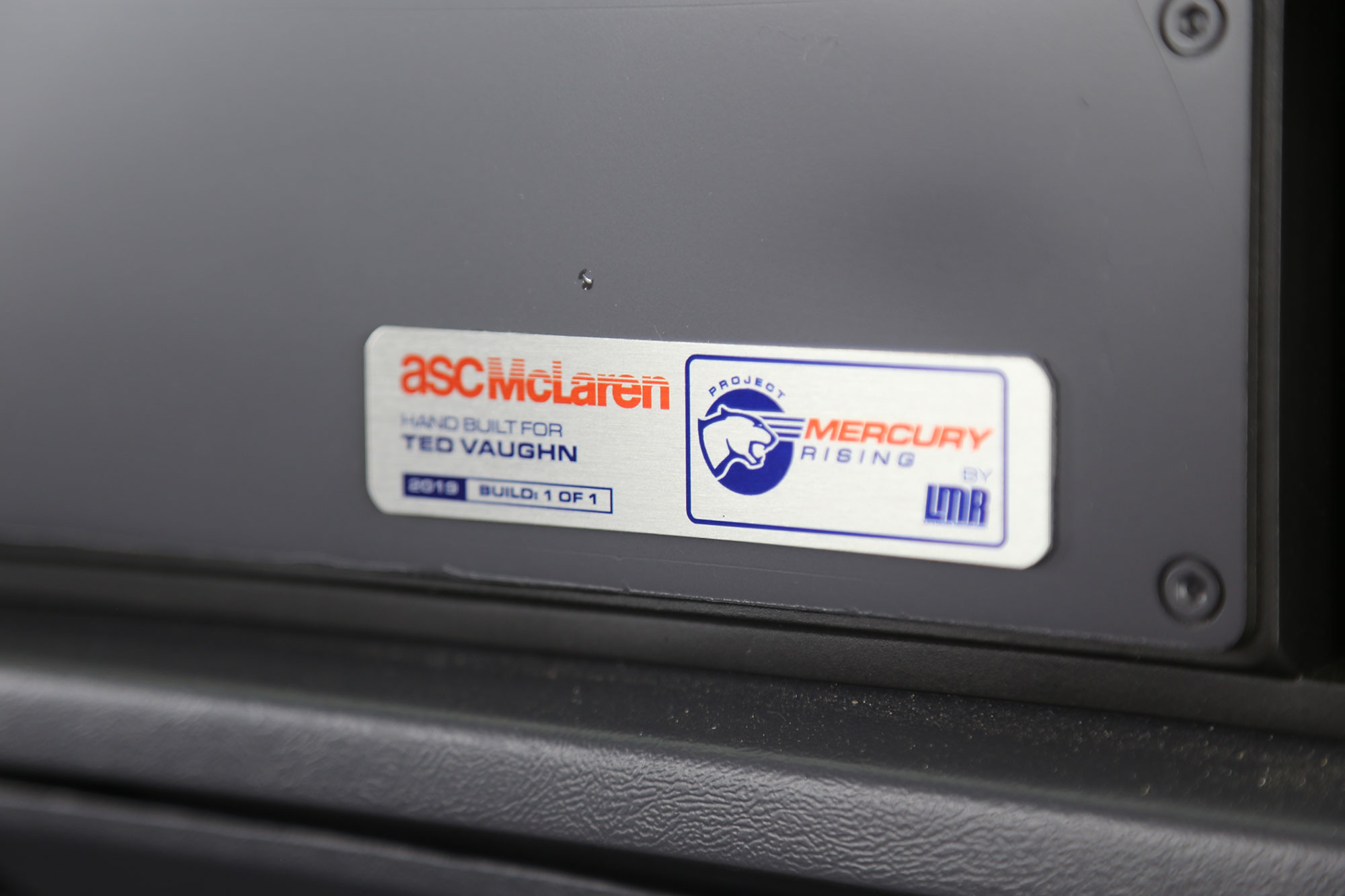 Part of pushing Shannon to that limit was his own desire to not only bring this car back to life, but to make it a one-of-one machine with a host of special touches. It was a manifestation of the kind of build many car enthusiasts dream of, but it wasn’t motivated by self-gratification. Shannon kept pushing to make the car special for Ted.

“Many hours were spent making sure we built a car that drove beyond its years,” he added. “There are so many little details that I would say most folks would consider extra special, but if I had to list a few it would be the splitter, wheel well liners, wiring, instrument cluster, and updated Whistler radar detector like the original car.”

When the time came to reveal the car, it was an emotional moment for all involved. Ted was simply overwhelmed, he just kept saying “No way!” over and over.

Whenever he faltered, Shannon reflected on the moment that Ted would see his car again. We have seen this happen on many automotive television shows, and LMR created a detailed video series that follows the rebirth of the project known as Mercury Rising. It is a fitting moniker for a labor of love that became a full-rotisserie restored icon.

“Had I involved him in any more than just a little disassembly, I wouldn’t have had the opportunity and motivation to blow his hair back! I knew from the beginning I would need something greater than a mechanical fantasy to keep me in the game all the way till the end,” Shannon said. “Let me be clear. There were many times I wanted to just let that cat out of the bag. I would always replay that scene I had cultivated in my mind of handing over a dream car to a person you love so much. (Probably too many episodes of Chip Foose on Overhaulin’ to blame.)”

Through that process, the ASC McLaren regained its signature parts courtesy of Henry Huisman and picked up a generous dose of upgrades, including a Gen 2 Coyote 5.0-liter crate engine from Ford Performance and a TREMEC T-56 six-speed transmission which feeds the power to an 8.8-inch rear end with Cobra 31-spline differential, 3.55 gears, and 31-spline axles. The car rides on a full Maximum Motorsports suspension, including torque arm, Panhard bar, sway bar, lower control arms, and adjustable shocks and coilovers. It stops courtesy of SVE Cobra brakes front and rear.

Inside the interior received a generous application of DEI’s Boom Mat to keep noise at bay, while a local shop handled the upholstery of the factory interior. Of course, there is a generous dose of LMR’s own products on the car including door hinges, hood bumpers, hood hinge cups, door latches, and more. All contribute to making this machine better than it ever was back in 1985. 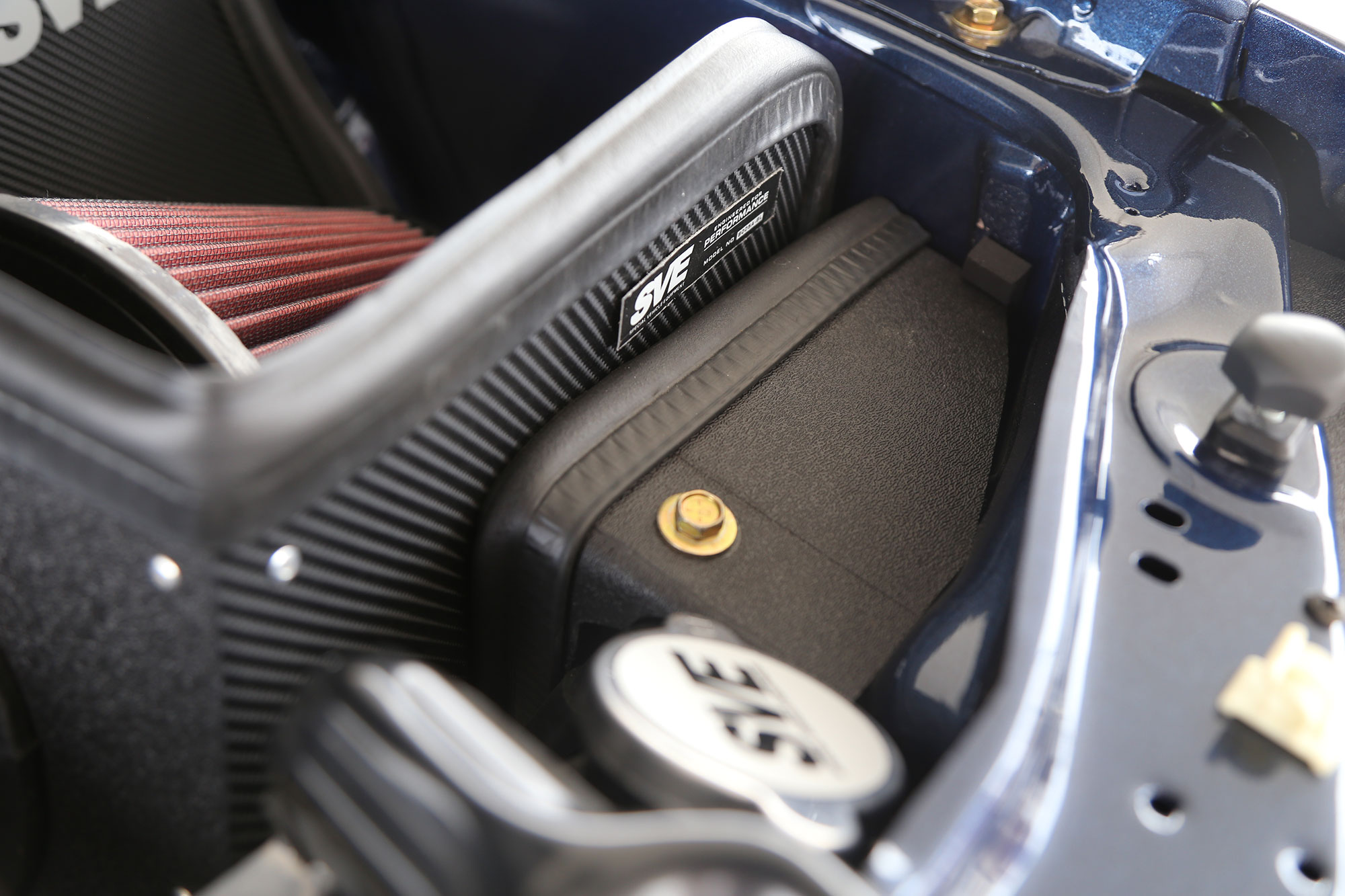 When the time came to reveal the car, it was an emotional moment for all involved. Ted was simply overwhelmed, he just kept saying “No way!” over and over. The LMR cameras documented the moment when Henry, the shepherd of the ASC McLaren brand, drove the car out of The Hideout for the reunion with its proud owner.

“I was ecstatic and I am still crying,” Ted confessed.

“I had harnessed so many emotions from this amazing build that it was one of the best days of my life,” Shannon added. “It was the end and a new beginning for everyone involved. So many people helped keep this undercover that we just couldn’t believe he really had no clue.”

“It still has the feel for the road, but with twice the power and speed,” Ted explained. “It’s a dream come true. It’s great to have a family like Late Model Restoration!”

We caught up with the car last September during the company’s annual show at the Texas Motorplex in Ennis, Texas. The passion and attention to detail shine through in every nook and cranny of the car. If you missed this build, the whole series is documented on the LMR website and YouTube channel and it definitely lives up to its Mercury Rising moniker. Plus, that reveal video might just bring a tear to your eye...