Mustang II was the right car at the right time. So, why do so many hate it?
By Jim Smart | Images Courtesy Jim Smart and Ford Motor Company

A Mustang By Any Other Name?
‍Why the 1974-78 Mustang was named Mustang II remains a mystery, though some Ford insiders have said it had everything to do with Mr. Ford’s status as Henry Ford II. There was also LTD II and Capri II. Product planners also wanted the all-new Mustang to have a “next-generation” demeanor. What Ford perceived as a great idea—Mustang II—pigeon-holed the car with a name that isolated it from other Mustang generations.

When Mustang II was introduced to the press in August of 1973, the response was mixed. The car was more elegant, especially as the optional Ghia coupe, which replaced the Grande. However, it was smaller and underpowered. Mustang II would be assembled in two plants—Dearborn, Michigan and San Jose, California (Milpitas). Although Mustang II was radically different than the classic 1965 Mustang, it had all the elements of great timing. It was the right car at the right time, and it sold very well considering how competitive the market was at the time.

Mustang II was a subcompact in a field of sporty compacts. It didn’t compete head-on with Camaro, Firebird, AMX, Barracuda, and Challenger because it was no longer a sporty compact. Ironically, Barracuda, Challenger, and AMX would go away after 1974 because the market left them. Buyers wanted fuel efficiency. Mustang II delivered better fuel economy than any Mustang before, which was even more important in the winter of 1973-74 during the Arab Oil Embargo. 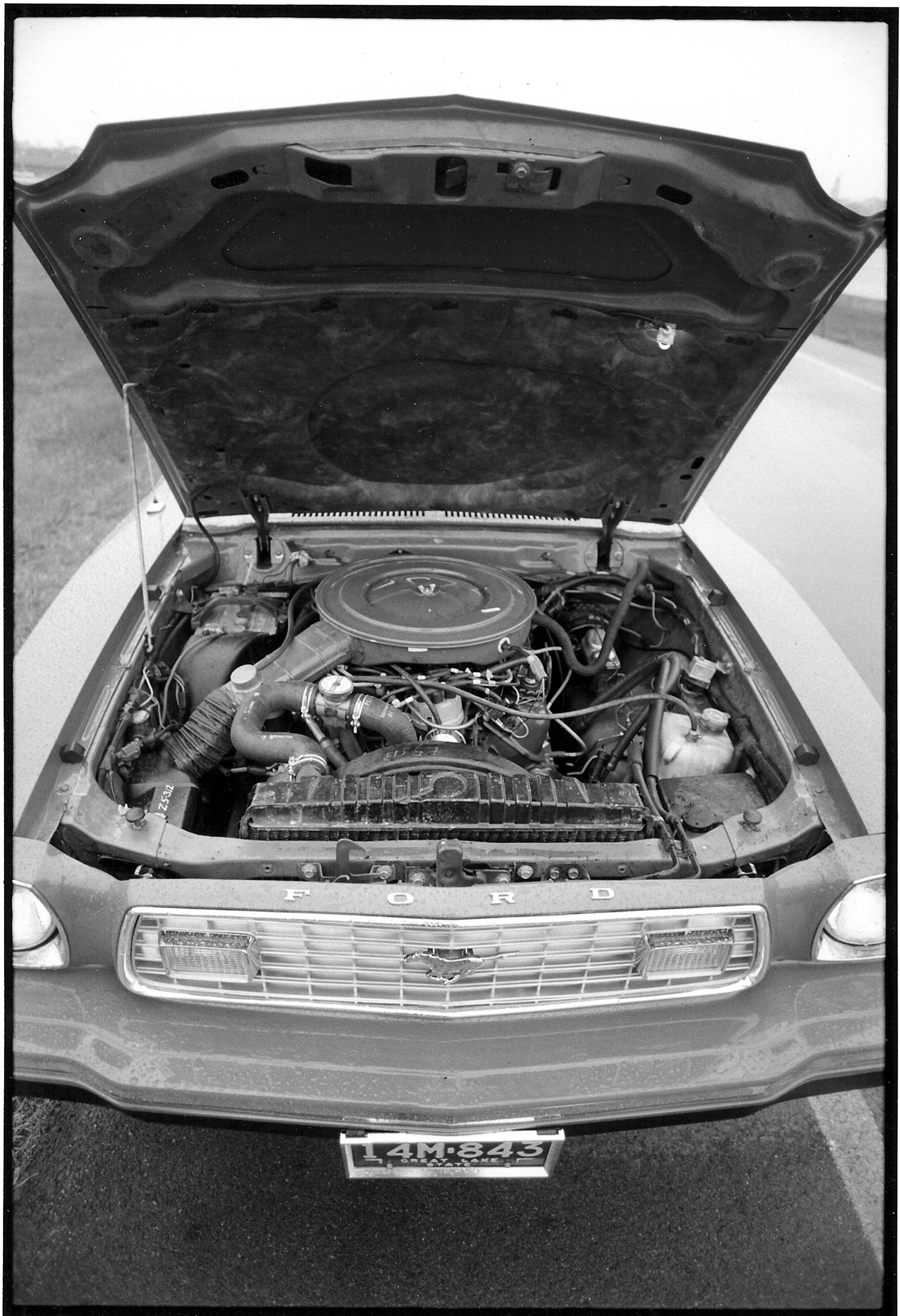 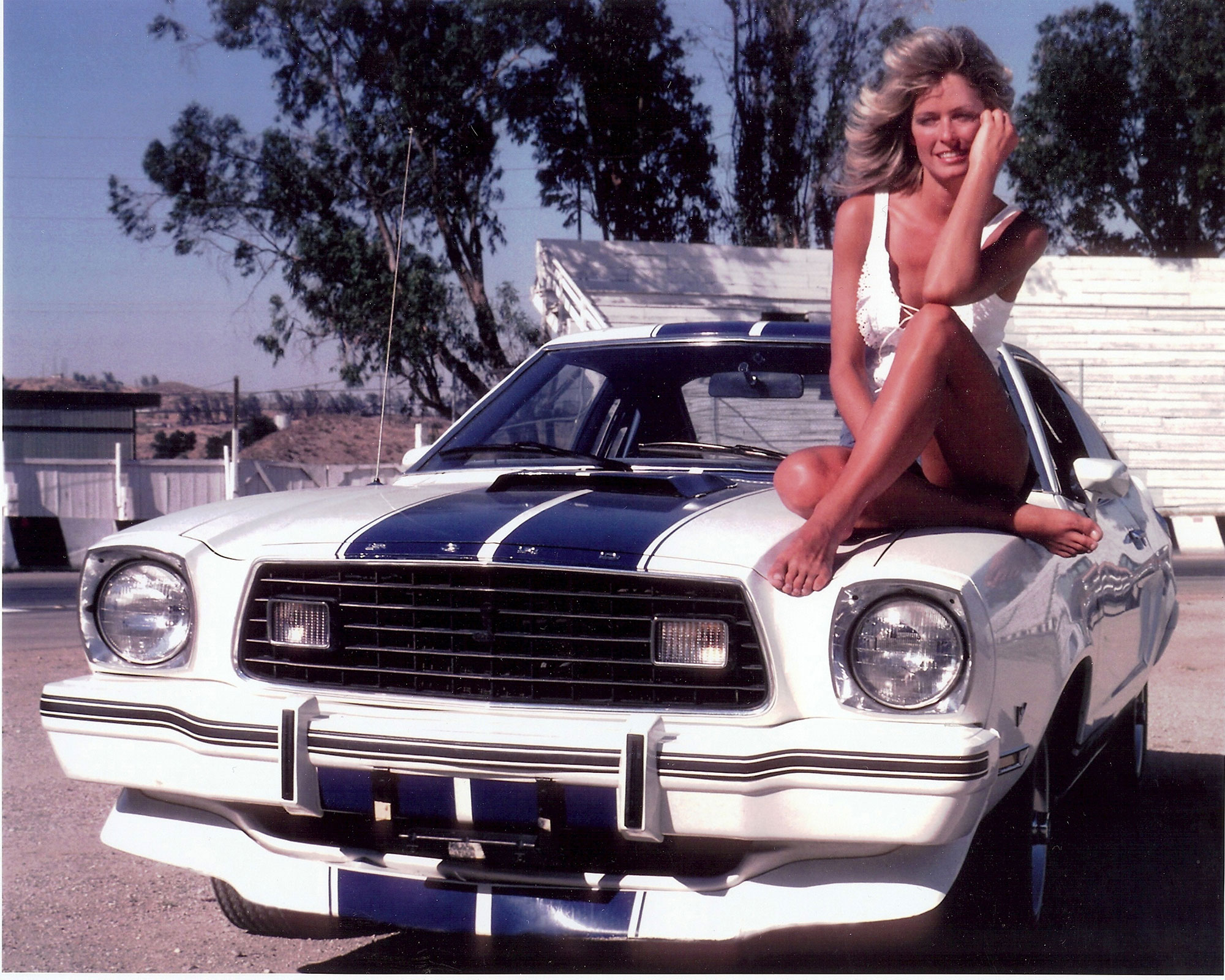 Television helped Mustang II sales significantly. Actress Farrah Faucet of the “Charlie’s Angels” series on ABC, produced by Aaron Spelling, was a Ford showcase with two Mustang IIs and a Pinto, which sold a lot of young people on Ford products.
BELOW: Beginning in 1975, Mustang II Ghia got those narrow opera windows, which made the Ghia more distinctive. This is Mona Burgess’ 1978 Ghia coupe, which has been a hit with Mustang II enthusiasts.
advertisement 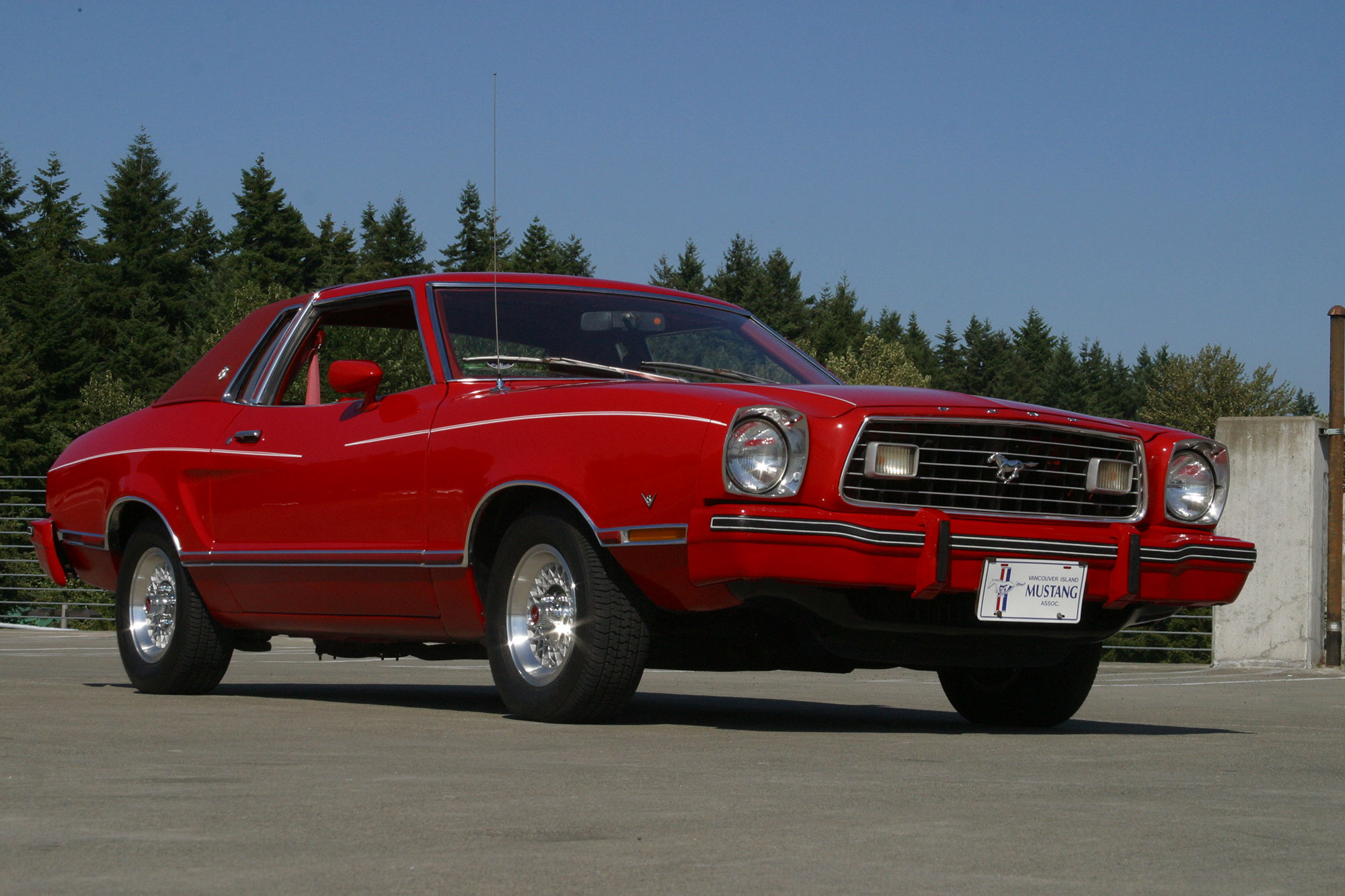 BELOW: Mach 1 for 1977 all in black makes this one distinctive. Call it Mustang II lust, especially if it had the 302ci V-8 and a four-speed. 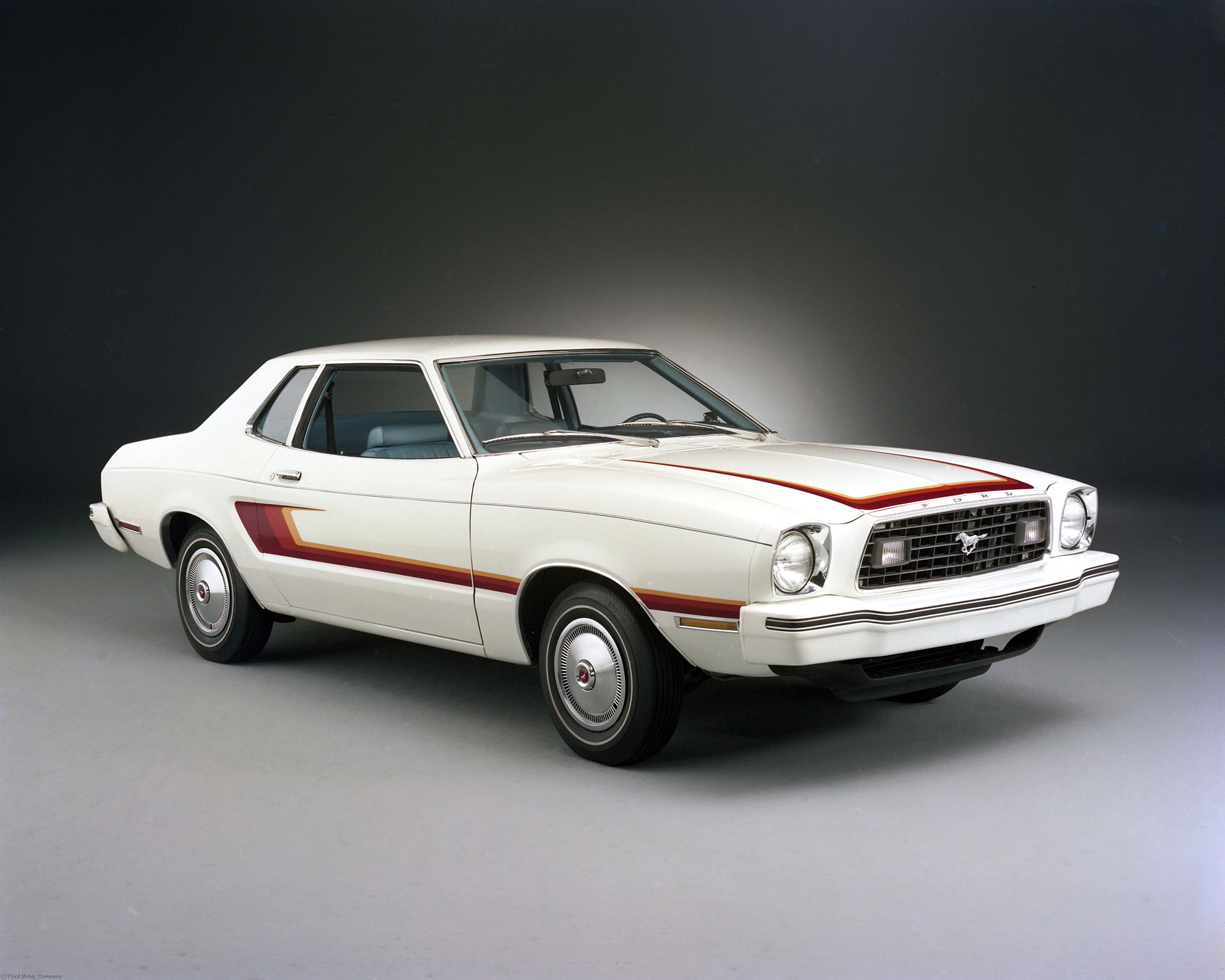 ABOVE: Mustang II with a dealer graphics package.

Although Mustang II was a refreshing change, the buying public didn’t respond as expected. Ford loaded dealer lots with well-appointed Mustang models priced in the $4,000 range, which turned buyers off who bought economy models like Pinto and Maverick instead. Ford expected to sell over 30,000 Mustangs right off the bat. Yet, it sold just 18,000 units, a huge disappointment for the company. In due course, as the Arab Oil Embargo unfolded, the Mustang II swiftly began to sell itself. Buyers wanted better fuel economy and that’s exactly what they got from Mustang II. Sales skyrocketed to 385,993 units by the summer of 1974. The oil shortage and reality of high fuel prices was what sold Mustang II that first year.

Although Mustang II sold extremely well going in, sales went into a freefall in the years to follow. The Mach 1 name didn’t mean much without power. Edsel Ford II was quoted in an early 1980s interview as saying, “All we had was paint and tape, none of us had any engines…” and so it went during the oppressive 1970s. The car not only needed more room inside, but it also needed more power, which was never going to happen considering government and insurance regulations at the time. Automakers were consumed with meeting tougher emission laws and mounting safety concerns. There was very little time to think about performance.

In the wake of a great sales success in 1974, Ford focused on appearance packages like Mach 1, Cobra II, Stallion, and even an MPG package that emphasized fuel economy to get sales moving. The Cobra II, introduced for 1976, was little more than an appearance package. The arrival of the 302ci V-8 for 1975 with two-barrel carburetion gave the Mustang II more spirited performance, but not by a wide margin. Most of the Mustang IIs were 2.3L and 2.8L powered. Although the V-8 improved Mustang II’s image, sales didn’t inspire anyone at 188,575 units in 1975.

During the Mustang II years, Ford was working quietly behind the scenes on a new Mustang for 1979. Meanwhile, Ford had to sell Mustangs. 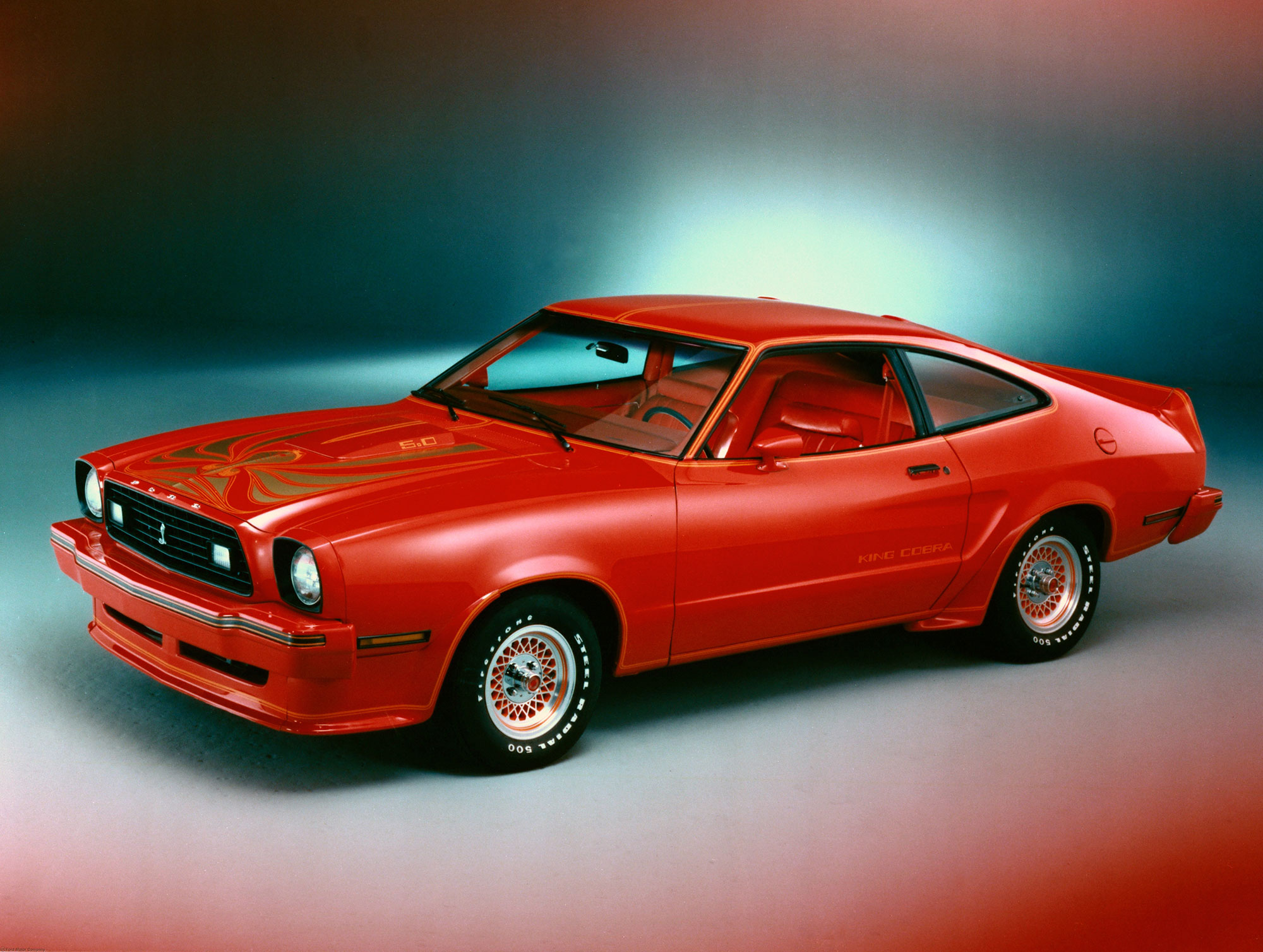 The most desirable Mustang II of all was the 1978 King Cobra, which was an eleventh-hour idea from the top at the Ford Division. King Cobra helped improve sales numbers for 1978 at 192,410 units. Ford built 4,318 of them. The original goal was 5,000 units. 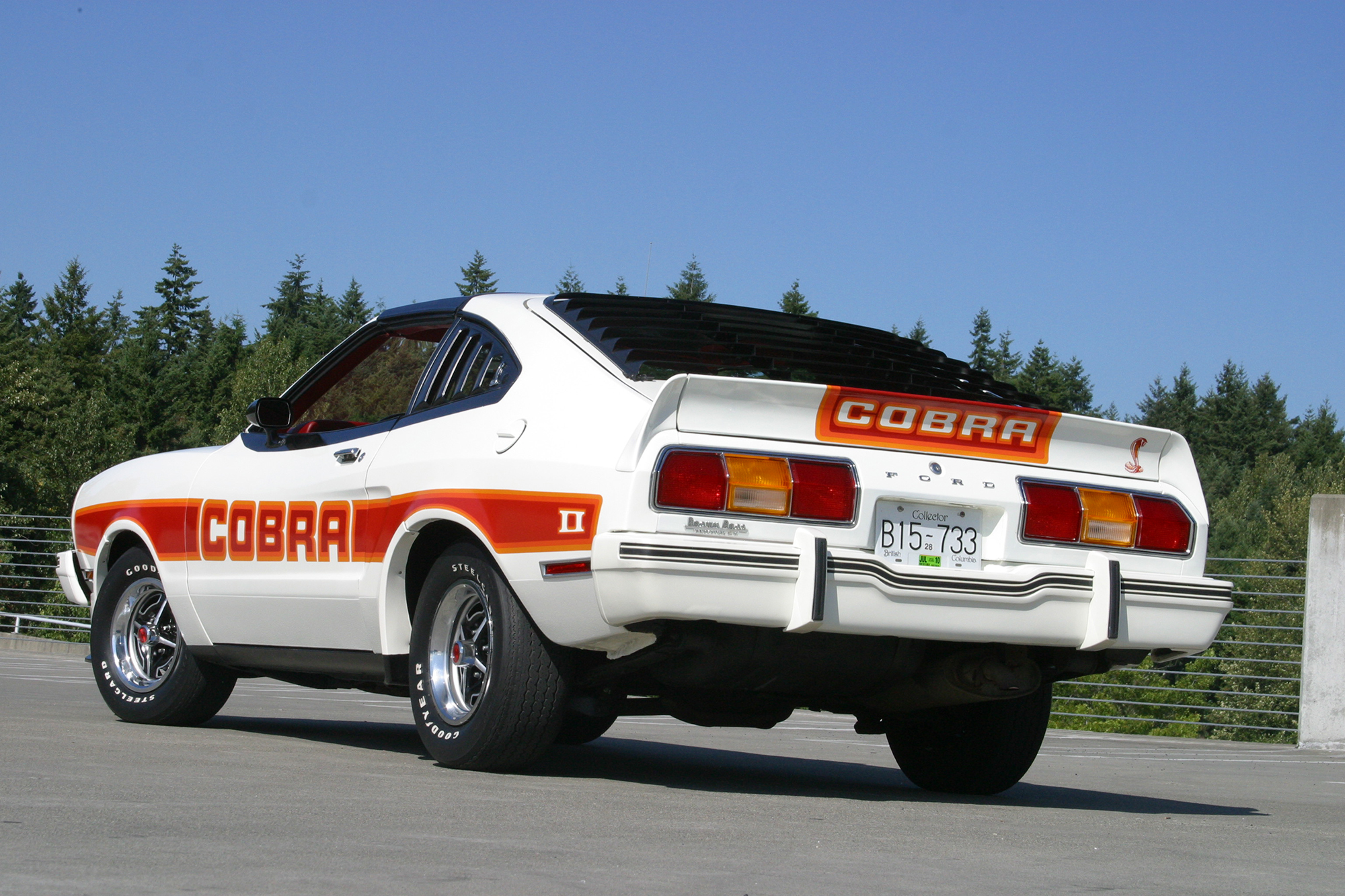 Cobra II went to market in 1978 as a standalone Cobra II with wild graphics.

Ford’s marketing types focused more on the Mustang lifestyle than performance. The message from Ford to buyers was living the Mustang life. Horsepower was all but dead. Ford also focused on the elements Mustang never had before, such as standard, full-instrumentation including a tachometer, button and tuck upholstery, comfortable seating, a map light, and even more options, including a T-Roof. Despite the many features, sales remained stagnant at 187,567 units for 1976—plummeting to 153,173 for 1977. Sales improved for 1978, with a total of 192,410 units that year, bringing Mustang II total production to 1.1 million.

Not bad for the Mustang nobody wanted…
It became increasingly clear it was time for a fresh Mustang attitude. During the Mustang II years, Ford was working quietly behind the scenes on a new Mustang for 1979. Meanwhile, Ford had to sell Mustangs. From December of 1977 to July of 1978, Ford produced the Mustang II King Cobra to help spur sales in this generation’s last model year. Ford expected to build 5,000 units. It sold just 4,318. The King Cobra was quite the attention-getter as a slippery hatchback available only with the 5.0L-2V V-8 engine, a four-speed manual or three-speed automatic transmission, power brakes, and power rack and pinion steering. It was a well-thought-out option package from Ford that got buyers excited about the Mustang again. It has been confirmed Ford produced 2,017 King Cobras with the four-speed and 2,289 with the C4 Select-Shift automatic.

ABOVE: Mustang II’s interior on all levels was elegant—a quantum leap beyond 1965-73, with appointments that made it cozy for the journey. Carpeting was a thick pile, like in luxury cars and the high-end Lincolns.