It was the right car at the right time. So, why do so many hate it?
By Jim Smart  |  Images Courtesy Jim Smart and Ford Motor Company

It was a hot, muggy, still summer evening in suburban Washington, D.C. back in 1973. My buddies and I were hanging out in the mall parking lot when someone mentioned the all-new Mustang coming for 1974. Word on the street was the new Mustang was based on the Ford Pinto, which concerned all of us.

The Mustang would no longer be available with a V-8, nor would there be a convertible option. It would be smaller—a subcompact. Teaser spy shots appeared in the magazines and we were all horrified. We perceived the 1974 Mustang was going to be the end of the Mustang as we had always known it. We became committed to keeping our classic 1965-73 Mustangs and Ford could build whatever it wanted.
‍
However, Mustang II wasn’t the end—it was the beginning of a new generation of Mustangs that lead to the generations of ponies we would embrace in the decades ahead. Although Mustang II was smaller than the original classic, it was getting close to the size Lee Iacocca and Ford product planners envisioned when the “Sporty Ford Car Project” was launched in 1962. And, like the original 1965 Mustang, it would be built on an existing platform.

Rethinking The Mustang
‍The 1974-78 Mustang II has long gotten a bad rap it has never deserved. Enthusiasts called it junk, ugly, squatty, a re-bodied Pinto, and even the red-headed stepchild of Mustangs. However, did you know Mustang II was the most advanced Mustang ever when it was introduced to the press by then Ford President Lee Iacocca, in August of 1973? Iacocca, who was the brainchild behind the original Mustang a decade earlier, beamed with pride while the press and public looked on during a gala introduction. A white 1974 Mustang II Ghia coupe whirled around on a turntable where everyone could get a look at the “Little Jewel” from Ford. Iacocca was so sure Ford had a smash hit. However—buyers would be slow to come around. Sales in the fall of 1973 would be lackluster at best as buyers attempted to warm up to a decidedly different Mustang. 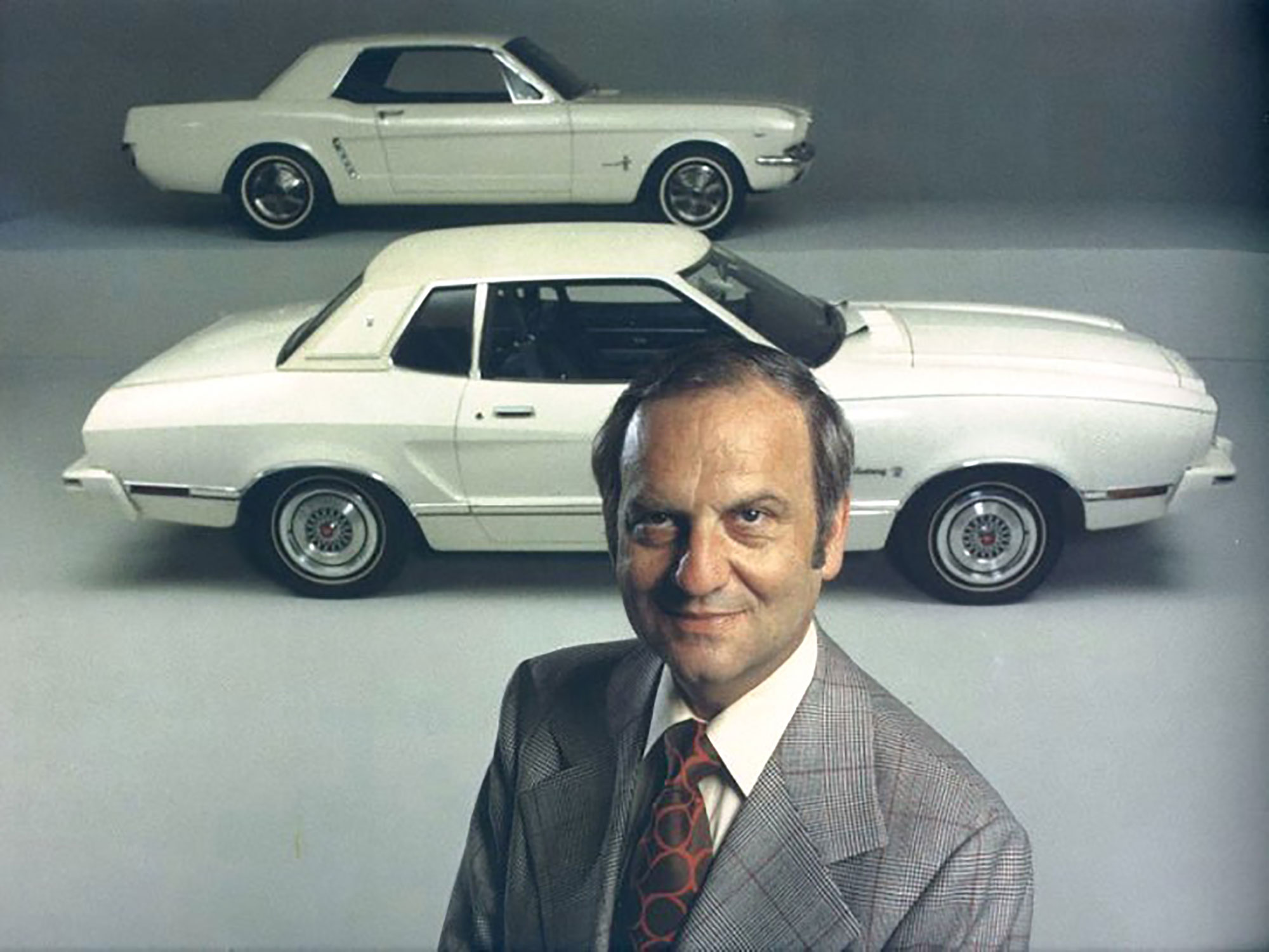 ABOVE: Ford President and marketing genius, Lee Iacocca, posing with “The Little Jewel”—the all-new Mustang II for 1974. BELOW: Mustang II Mach 1 was available only as a slippery hatchback with classic Mach 1 graphics, slotted wheels, raised-white-letter Firestone Steel Radial 500s, and an array of exciting colors at a time when dull earth-tone colors were becoming the norm.

The Mustang II did not come to market easily. Ford product planners, engineers, and stylists were perplexed on what to do with the Mustang. There was a lot of research and development to be done—and in a short time. Mustang had grown too large and well away from what Ford brought to the market in 1964. People wanted economy and size, yet they also wanted style. And that’s exactly what Mustang was until 1971 when short-lived Ford President Semon E. “Bunkie” Knudsen decided Mustang needed to be larger to accommodate the powerful engines he envisioned. He also wanted Mustang to be all things to all people—which was never a realistic expectation.

Knudsen, a former GM executive and head of the Pontiac Division, was never a good fit for Ford’s very different corporate culture. He joined Ford in 1968 and was fired by Henry Ford II in 1969. In a 2004 interview in Mustang Monthly magazine, Lee Iacocca gave Knudsen abundant credit for screwing up the Mustang and steering it away from the market it created. Buyers responded in the early 1970s by not buying Mustangs. Stockholders reacted with heated comments addressing how large the Mustang had become. By 1973, Mustang sales numbers were in decline at 134,867 units, up a pinch from a very depressing 1972 – only because rumors of the Mustang convertible and V-8 being dropped concerned buyers who flooded the showrooms with orders. 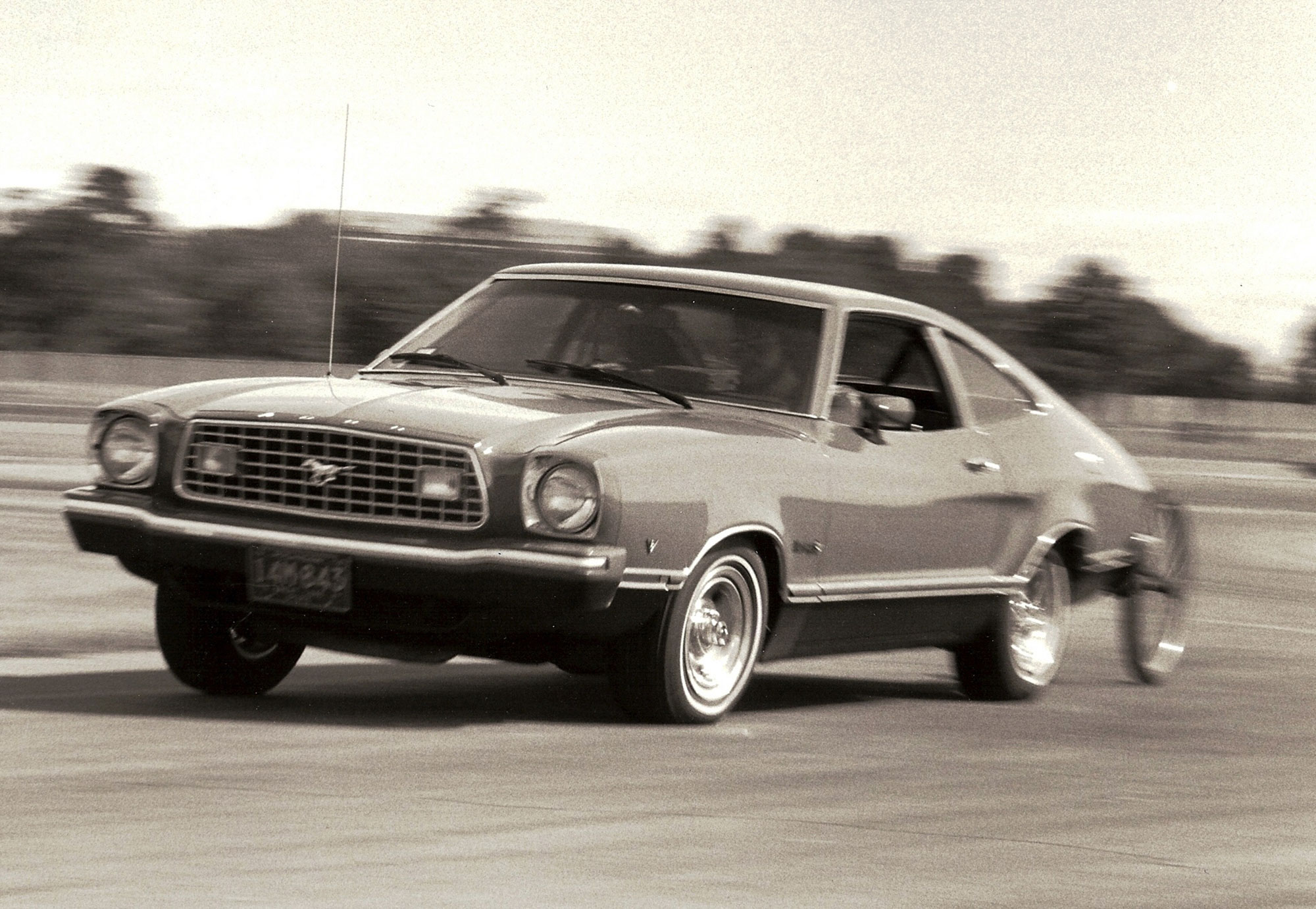 When Iacocca was appointed President of Ford Motor Company in 1970, he went right to work on fixing the Mustang carline. It was known as the “Arizona” Project. Target launch was the fall of 1973 with an all-new “right-sized” Mustang. Nat Adamson, product planning manager, was enlisted to develop the 1974 Mustang. Ford Advanced Design conceived several clay concepts for evaluation, including two-seaters, which were never going to sell. None of these concepts impressed Ford management.
‍
Although we think “Pinto” when we reflect on Mustang II, part of the original game plan was to build the new, smaller Mustang on the Maverick platform, which was named the “Ohio” project. Building a Maverick-sized Mustang seemed like a good idea, especially considering Maverick sales were some of the greatest in Ford history. However, a Maverick-based Mustang wouldn’t have been much different than the original 1965 Mustang. It was time for a fresh approach to America’s Original Pony Car. 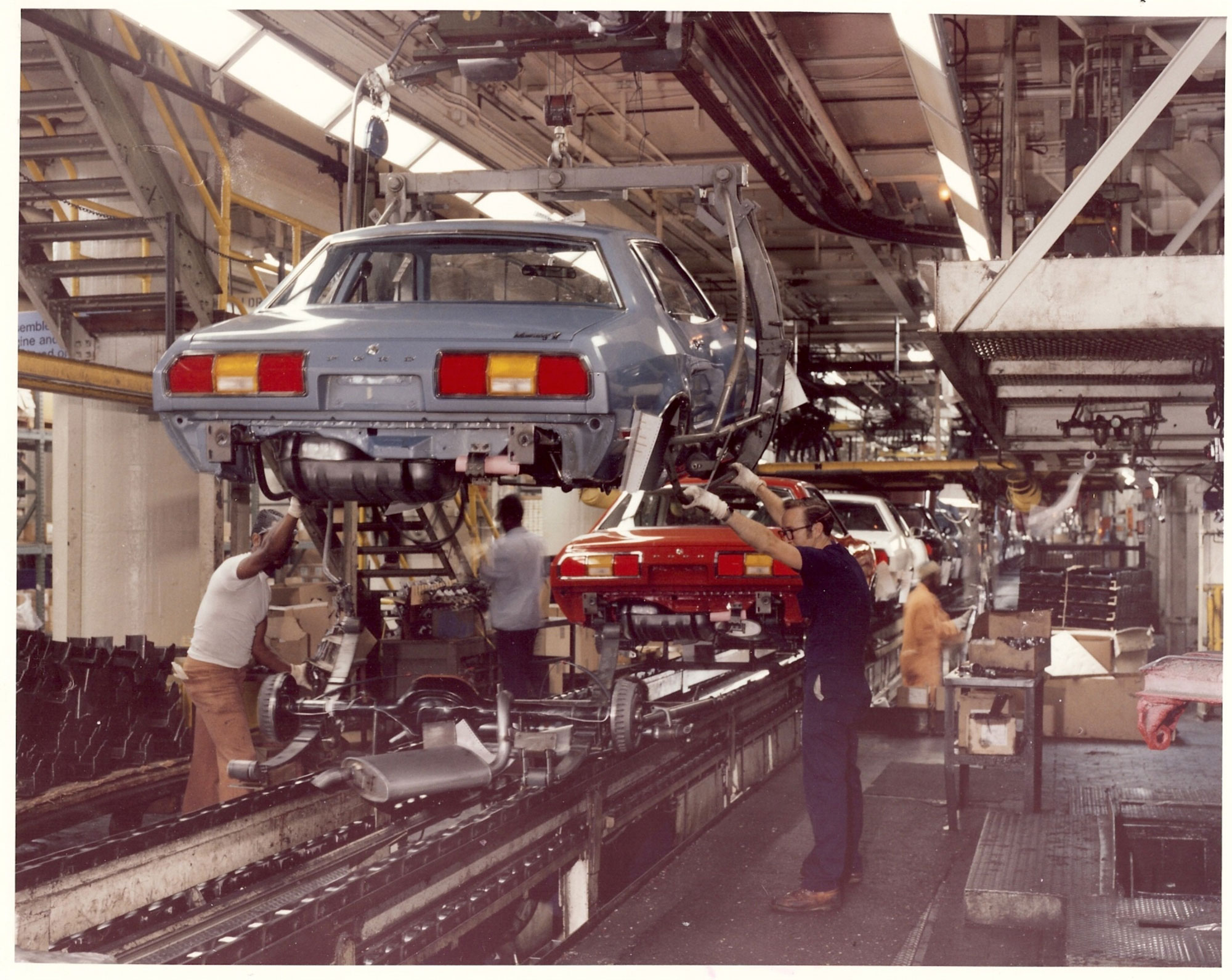 ABOVE: Ford built the Mustang II in two assembly plants—Dearborn, Michigan and San Jose (Milpitas), California. This is the final trim and chassis line at Dearborn.

Ford Capri, a sporty subcompact car offered in Britain, got Ford North America’s attention. It sold very well in Britain and Europe. When Capri was introduced in the United States in 1970 as a Mercury Division model, Ford was stunned at how well it sold. The nation’s second-largest automaker couldn’t help but notice the aggressive sales of other import and domestic sport subcompacts like the Datsun (Nissan) 240Z that were flooding the market at the time. It was time to take another look at Mustang’s direction.
‍
In the wake of abundant market research, Ford decided to build the Mustang as a subcompact instead of the compact it had always been. The decision was made to develop the Pinto platform further with cool engineering refinements that would make it the most advanced Mustang ever. Iacocca launched his effort by having the Ghia Design Studio in Italy design and build a drivable prototype he could evaluate. Ghia produced the car quickly and delivered it to Iacocca in just 53 days for evaluation and road work. The Ghia notchback coupe looked sharp and was long on potential.
‍

BELOW: The most desirable Mustang II of all was the 1978 King Cobra, which was an eleventh-hour idea from the top at the Ford Division. King Cobra helped improve sales numbers for 1978 at 192,410 units. Ford built 4,318 of them. The original goal was 5,000 units.
advertisement 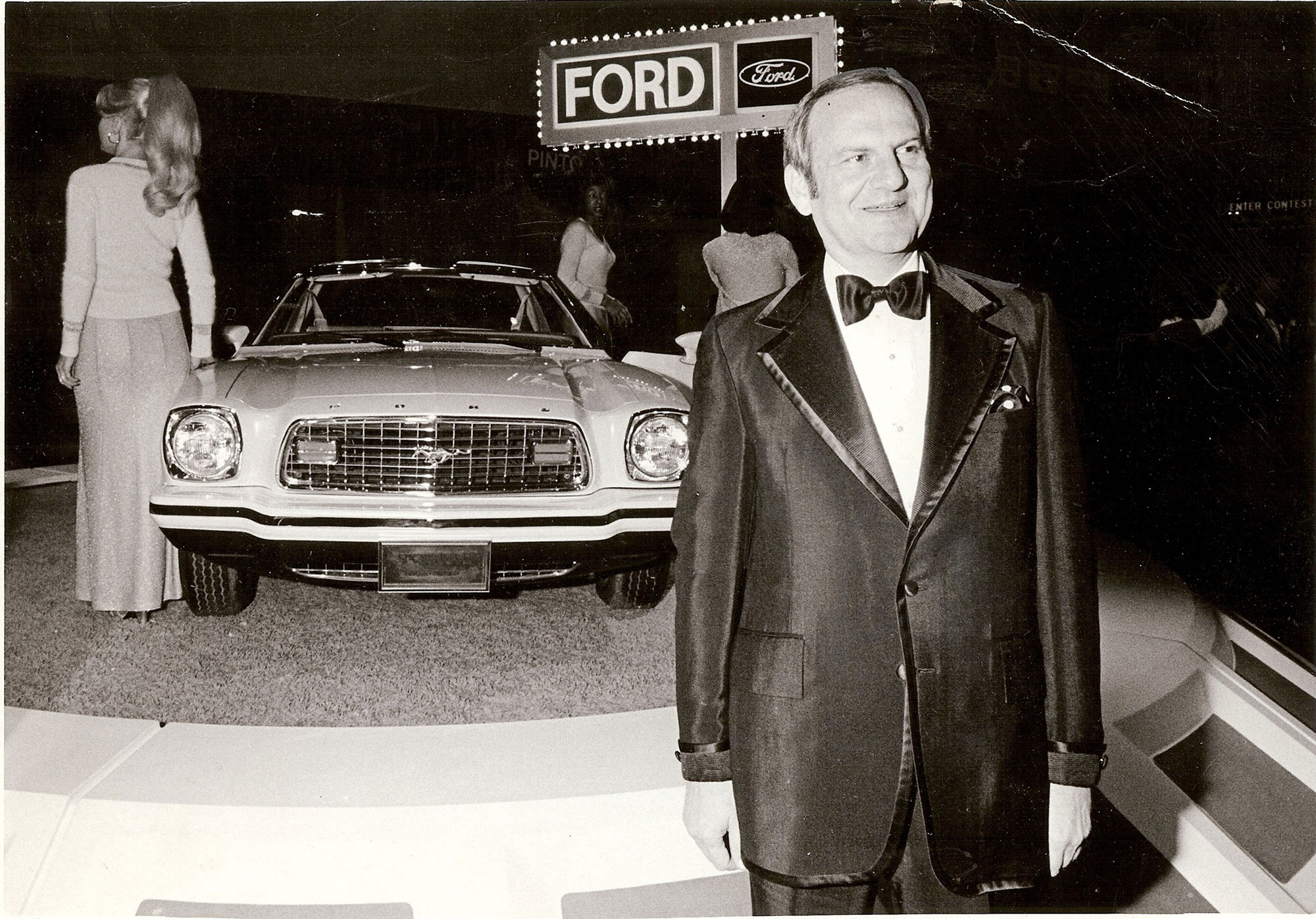 ABOVE: Lee Iacocca and the all-new 1974 Mustang II introduction. What do you think of that tux?

Finding Refinement
‍With critical styling issues out of the way, Ford was faced with important engineering decisions. Iacocca was quoted as saying, “It will have to be a little jewel…”  He strongly implied the new Mustang would have to employ engineering refinements that would make it way more advanced than the original Falcon-based Mustang. A new term in the industry was “NVH” or Noise, Vibration, and Harshness. The car had to be world-class in its execution and deliver ride and handling like never before.
‍
Though the new Mustang would be built on the Pinto/Bobcat platform, it would need to have noise-isolation elements that made it quieter with a smoother ride. Unlike Pinto, Mustang would have an isolation subframe known inside Ford as the toilet seat. The front subframe approach was nothing new. GM did this approach with Camaro, Firebird, and Nova with great success. The horseshoe-shaped subframe absorbed road boom and powertrain harmonics. It also simplified manufacturing.

The front subframe was vital to isolating the annoying shaky harmonics of a four-cylinder engine and the buzzy V-6, which also had its share of noise and vibration issues. Ford took these elements even further by redesigning the engine blocks to minimize annoying harmonics. It even opted for a large diameter driveshaft, heavier rubber suspension bushings, and a new form of sprayed-on soundproofing that would melt and flow into place in the paint baking oven.
‍
Mustang’s suspension system would take on nuances from the competition. Its front suspension would be more conventional, like Camaro and Firebird, with its bolt-on subframe and coil springs between the control arms along with a sway bar, rack and pinion steering, conventional shocks, and front disc brakes. In back, the new Mustang would have conventional multi-leaf springs and staggered shocks.
‍ 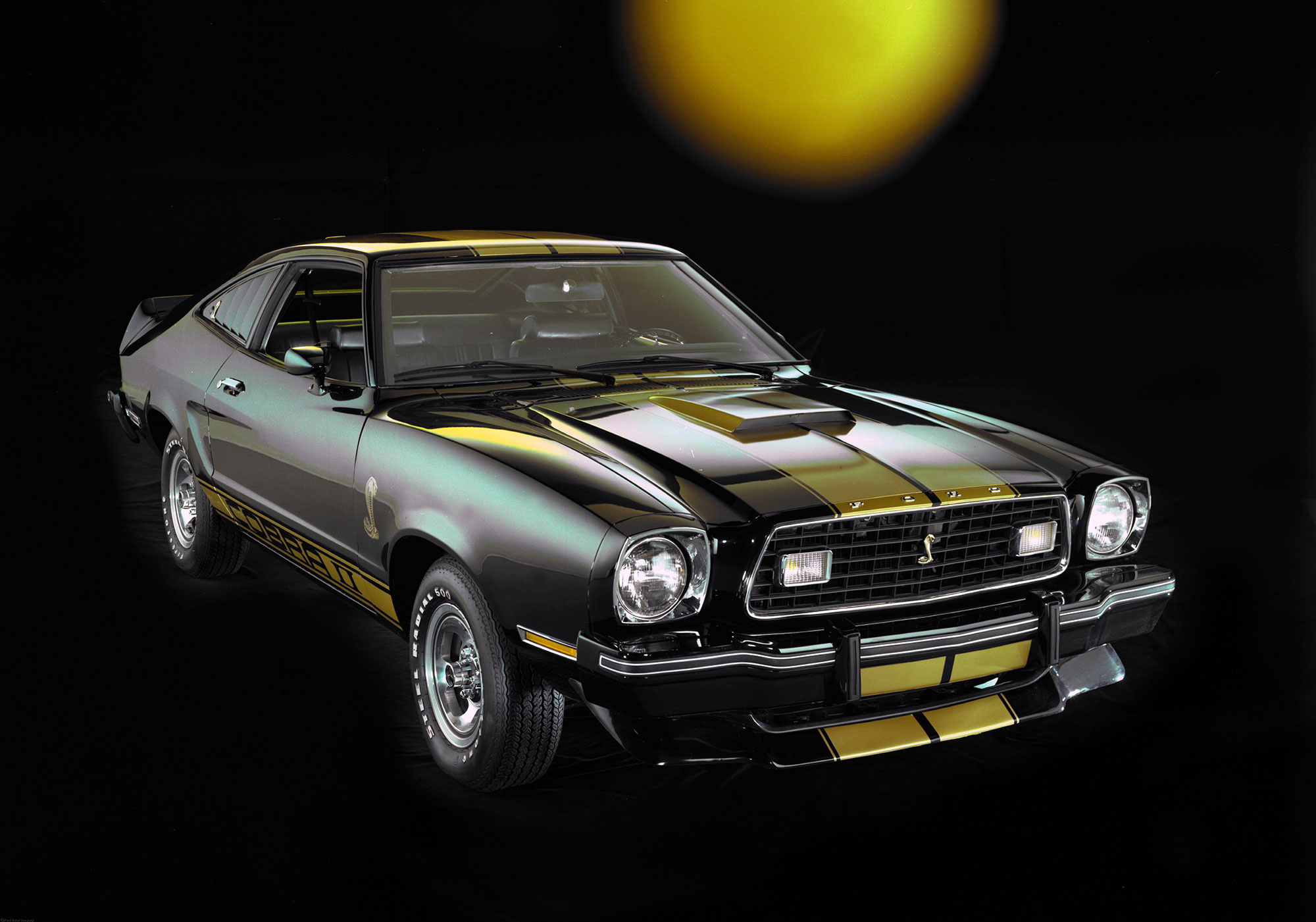 ABOVE: Check out the Cobra II in black with gold appointments. Cobra II was available with the 2.3L, 2.8L and the 302ci V-8.

Ford’s conventional corporate mindset at the time was the status quo, which annoyed Lee Iacocca, who wanted the new Mustang to be better than ever before. He wanted Mercedes Benz-caliber quality, fit, and finish. Iacocca’s belief was always the design and production of a better car, and that’s exactly what he got in Mustang II and the Ford Granada, which came on the scene a year later. Along with an all-new Mustang was a revised, galloping horse emblem, penciled out by Charles Keresztes, a Ford interior designer who was also a professional horseman who loved doing animal sculptures. Although the galloping horse still had the kick of the Mustang’s original pony, it had lost the energy—much as the car had.
‍
Those first engineering prototype road tests in the fall of 1972 impressed Iacocca. It was a better car than its 1965-73 predecessors—delivering crisp handling, a quiet ride, and a nice comfortable feel. Although Ford termed the Mustang II a hardtop, it was a coupe with free-movement door glass like a hardtop. Ironically, Ford called the 1965-73 Mustang hardtop a coupe, which it never was. It was always a hardtop. 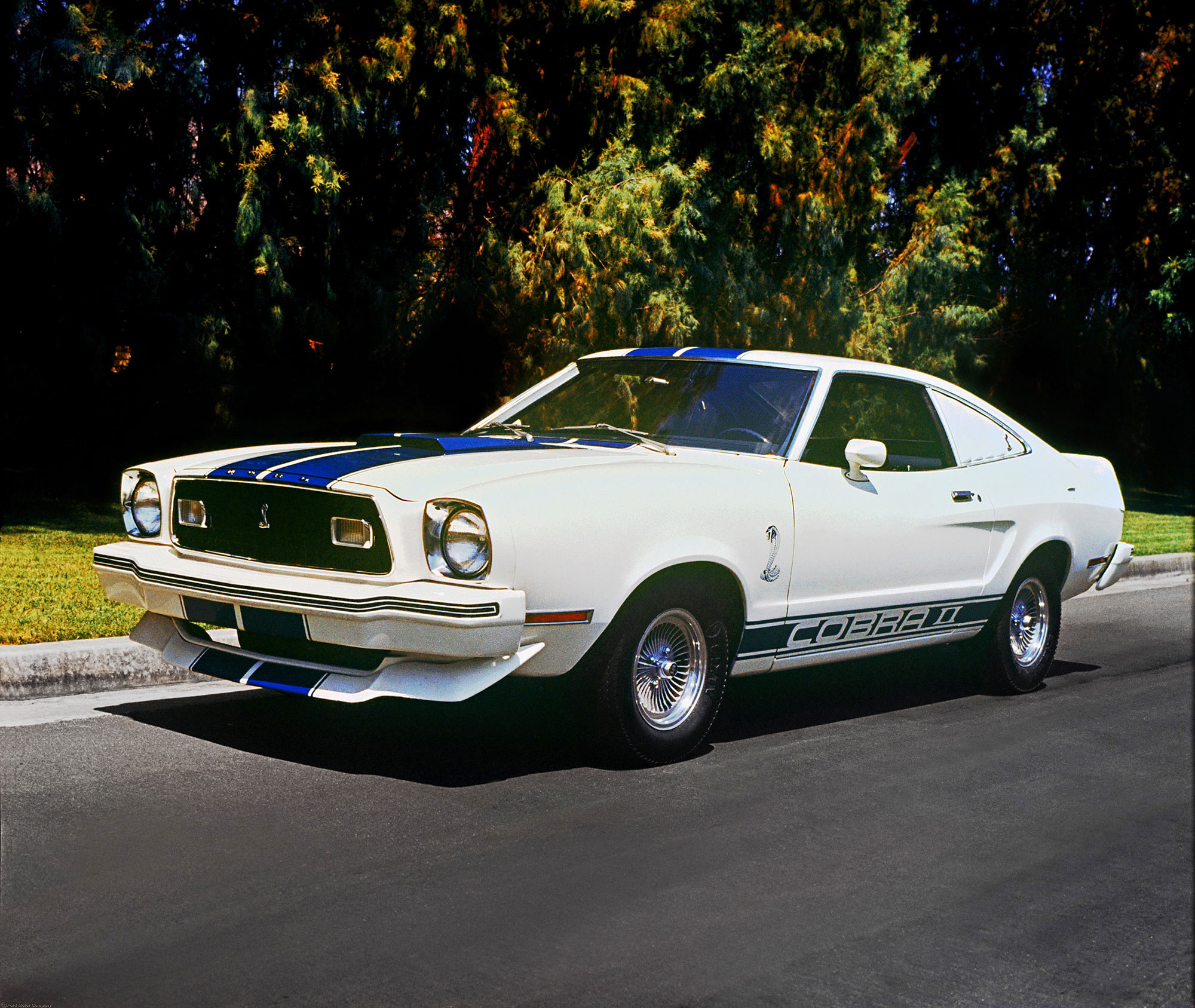