The 1968 Bullitt Mustang hit the bright lights to the tune of $3.74-million, but that’s just the tip of the story on this historic movie star car.

Story by Andy Bolig / Images courtesy of Mecum Auctions (except where noted)
From the very beginning, the car was destined for the big screen. There were two Highland Green, 1968 Mustang GT Fastbacks purchased by Warner Brothers for the movie BULLITT: VIN 8R02S125558 (‘558) and 8R02S125559 (‘559). This car wears VIN number ‘559 and was used for the bulk of the chase scenes while the other car was used for beauty shots. Being the car used for the chase scene, it was treated to a five-week crash course that would prepare it, and the bad guys’ black 1968 Charger for the abuse they would endure during filming.

Both cars were treated to magnafluxing of the car’s suspension components and the Mustang had its shock mounts reinforced, heavy-duty coil springs added, and Koni shocks fitted to the car. Crossbeam support bars were included, as well as tubes running underneath the car for mounting camera equipment. Roll bars were tucked into the interiors to help protect the drivers at every turn, especially the ones they missed! A set of Firestone F100 radials were installed on American Racing 15x7 wheels to give the car a more intimidating demeanor. Also, McQueen had the car’s backup lights removed, the grille blacked out, as well as removing all the car’s badging to give the star car a more rugged appearance.

Many of these changes, as well as the many less-glamorous modifications needed to make the cars usable for filming, are still on the vehicle. Camera mounts still hang from the rocker panels, mounts and holes still reside in the trunk, allowing the necessary wires and mounts for other cameras used during filming, and there’s even a touch of adhesive still clinging to the tachometer for a long-unrecorded purpose.

Many of these changes, as well as the many less-glamorous modifications needed to make the cars usable for filming, are still on the vehicle. 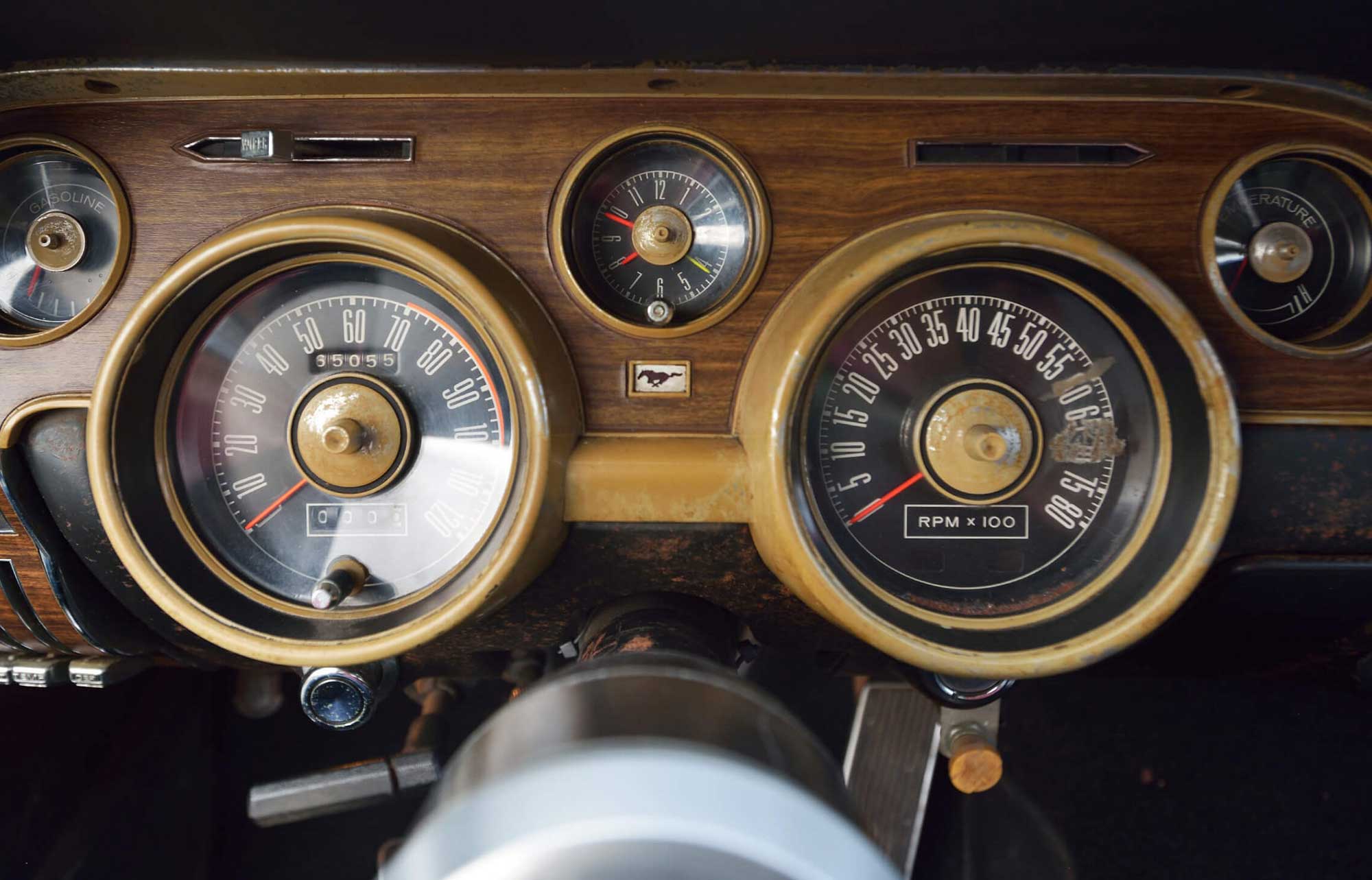 The 10-minute car chase scene in the video below took three weeks of filming in May of 1968 to get it all on film. The King of Cool, Steve McQueen, did most of the driving during shooting, but the severe, downhill jump scenes on Chestnut Avenue were manipulated at the hands of talented stunt driver Bud Ekins. Ekins reported that launching the Mustang at speeds of 60 miles-per-hour was like, “driving off the edge of the world!”

McQueen initially wanted to do more of the driving, but at the behest of the higher-ups, and after overshooting some turns, Steve conceded the wheel to the hired guns. One of McQueen’s missteps did make it into the final cut when he misses a turn and reverse-boils the hides of those Firestones to get back into the chase. Another highlight where Steve played a major role was when the shotgun-wielding bad guy blows out the windshield of the Mustang.
advertisement

When the streets of San Francisco had once again calmed to daily traffic use, the little green Mustang was rendered unnecessary for any more on-set action. A cracked A-arm from its last day of filming was repaired, as was the large dent on the passenger’s side from when the car made contact during filming. The car was then sold off to Warner Brothers employee, Robert Ross for $2,500. Two years later, Ross sold the car to New Jersey police detective, Frank Marranca. Frank keeps the car for four years and then sells it in 1974 to Robert and Robbie Kiernan for $3,500. Robert Kiernan noticed the car for sale through an ad in Road & Track’s October 1974 issue.

Kiernan knew about the car’s on-stage persona but was more interested in the big-block that resided under the hood of the car than it’s bad-guy chasing history. The Kiernans sold their tiny MG the week before and were simply looking for a daily driver. The 4-speed equipped, 390-powered GT clicked off both boxes as a big-block, daily-driver for Robert’s wife, Robbie and a fun-mobile for Robert. Robert Kiernan’s son Sean explained how such an icon could find itself doing school duty and grocery runs, “Movie cars weren’t really a thing!” he says. “Dad bought it because it was a fastback, and kept it because it was the Bullitt.” 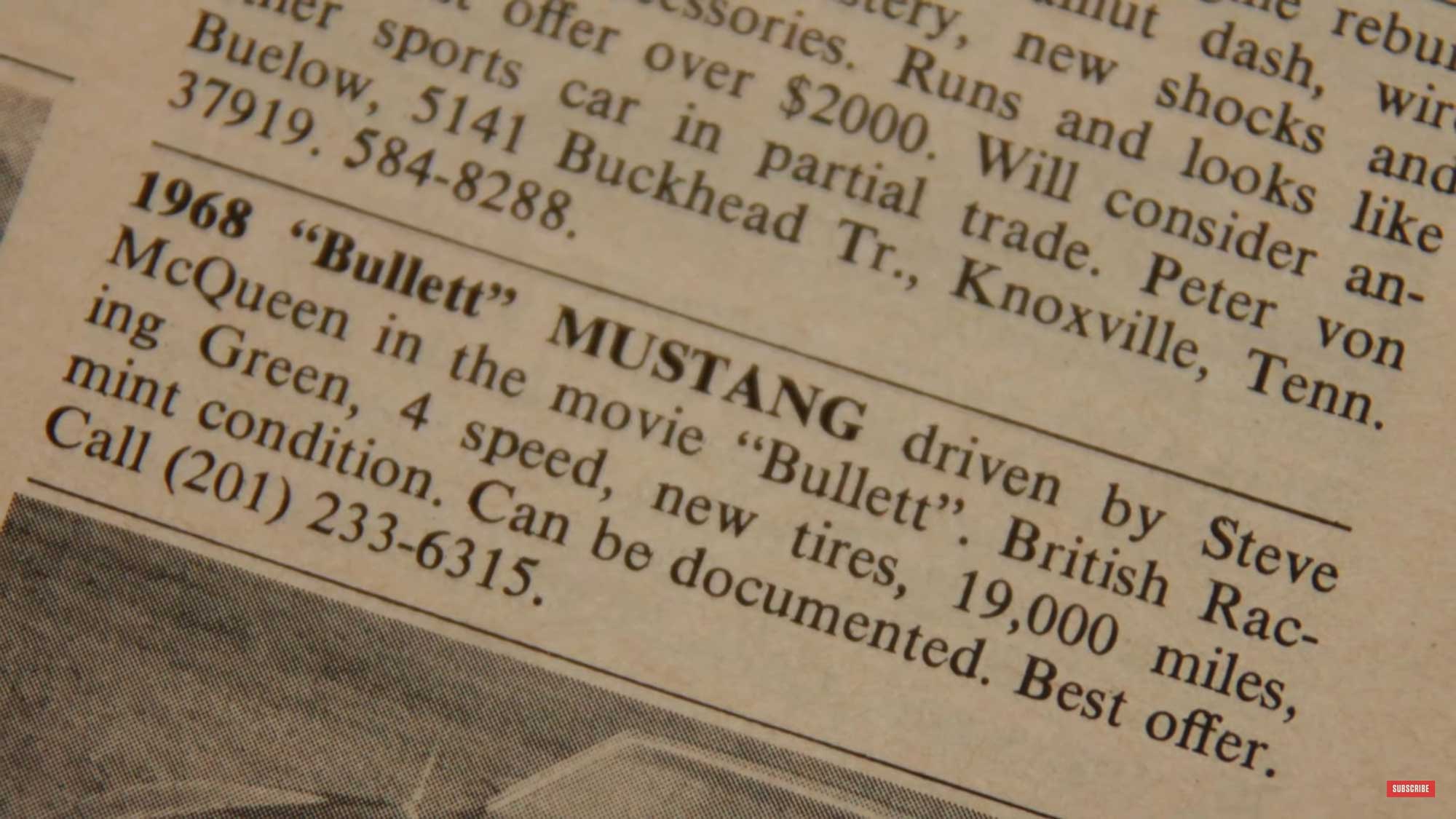 ABOVE: The car was located by the Kiernans from an ad in Road & Track’s October 1974 issue. Old movie cars were not hot commodities yet and the word Bullitt is misspelled. . BELOW RIGHT: The letter sent by the King of Cool, asking for the Mustang back. They respectfully declined the offer, but held on to the letter.
Photo Credit: Matt Marann Motoring/YouTube
advertisement

The green machine served the Kiernan family well until 1980 when the clutch finally gave out – time and daily-driver service doing what three weeks of intense driving and filming couldn’t. The Kiernan’s purchased the car with 19,000 miles on the odometer, which now shows 65,000. The car sat from that time in a silent obscurity.

The car’s identity wasn’t really obscured early on. In 1978, Robbie bought the New Jersey vanity plate “BULITT” as a gift to Robert. And just the year prior, the Kiernan’s turned down Steve McQueen’s offer to purchase the car back, offering to replace it with a similar Mustang, if the cost wasn’t too high. The Kiernans politely refused the offer and continued to use the car.

The green machine served the Kiernan family well until 1980 when the clutch finally gave out – time and daily-driver service doing what three weeks of intense driving and filming couldn’t. The Kiernan’s purchased the car with 19,000 miles on the odometer, which now shows 65,000. The car sat from that time in silent obscurity.

Robert Kiernan’s son, Sean, explains to YouTuber, Matt Marann Motoring that with the car’s growing popularity (thanks to the internet) the family decided to not publicly announce the car’s presence and kept the car in his grandfather’s garage while the family moved around to different homes. Sean reports that his grandfather didn’t see the value in the old car, and would repeatedly bump into it as he parked his car in the garage. Sean said that the car’s front bumper and valance had to be replaced, as it was damaged fairly extensively, thanks to his grandfather’s park-by-sound habit.

Popularity continued to build around the car and in the late-90s, Drew Barrymore actually contacted Robert Kiernan to see about using the car in the filming of the Charlie’s Angels movie, released in 2000. Reportedly, she offered to go out to dinner with the elder Kiernan to help sweeten the deal. Again the offer was politely denied and the car resided deep in the Kiernan’s storage.

In 2001, with Ford releasing an all-new Bullitt GT Mustang, Robert and Sean started restoring parts of their Bullitt Mustang to make it mobile once again. During the process, the senior Kiernan began to show signs of Parkinson’s Disease and work on the car was stopped. The same thing limited their desire to get back on the car when Ford again introduced another Bullitt Mustang in 2008.
advertisement
The clutch was repaired and the high-performance FE 390 engine was rebuilt using as many NOS components as possible.
Sean’s father passed away in 2014, and by the time Ford introduced its third iteration of the Bullitt Mustang, Sean had the car ready for the occasion. The car was once again shown to the public at the Detroit Auto Show in 2018, fifty years after it wowed the crowds in movie theaters for the first time. Sean confides that he typically gets asked three questions, “How long have you had it?”, “Do you drive it?”, and “What is it worth?”
We’ve already laid out the ownership timeline, and Sean confides that he does drive it some, although not NEARLY like his mother and father did back in the day. As for the last question. That one remained unanswered until recently, when the car crossed the auction block at Mecum’s Kissimmee,in January.

Owning the car for so long, there is no receipt trail to help distinguish a value over time. The last time the car sold, Gerald Ford had just taken office and the car has been in the care of the Kiernan family ever since.
advertisement

A blind person could have easily noticed there was a LOT more interest in movie cars at the Mecum auction than when that small ad first appeared in R&T. The atmosphere was truly electric, and a crowd surrounded the car when it moved onto the auction block. As a nod to the car’s history, the first bid was set at $3,500 and of course, every ne’er-do-well with less than a snowball’s chance to win the auction threw their hands up, pleased to say they were in the bidding (albeit for a nano-second), and all too willing to pay a beggar's price for such an icon.

The bidding ramped-up quickly, with zeros and commas being added faster than the auctioneer could respond. The bidding spun past half-a-million faster than a government spending proposal and the price went higher, faster than anything Elon Musk ever dreamed of producing. When the dust had settled, everyone knew what a special 1968 Mustang who played a major role in an iconic movie’s chase scene was worth.

A new record was established for the highest price ever paid for a Mustang at $3.74 million! It’s interesting to note that the car’s value today is based solely on its participation in the chase scene of so many years ago. While the value of the car fell off steeply soon after it drove out from under the hot lights, its value was quickly reinstated as it drove back under them during the Mecum auction. It is also quite interesting that it spent just eleven minutes on the auction block during Mecum, which is just under a minute longer than it had on the big screen during the infamous chase scene in the movie which gave it its name. 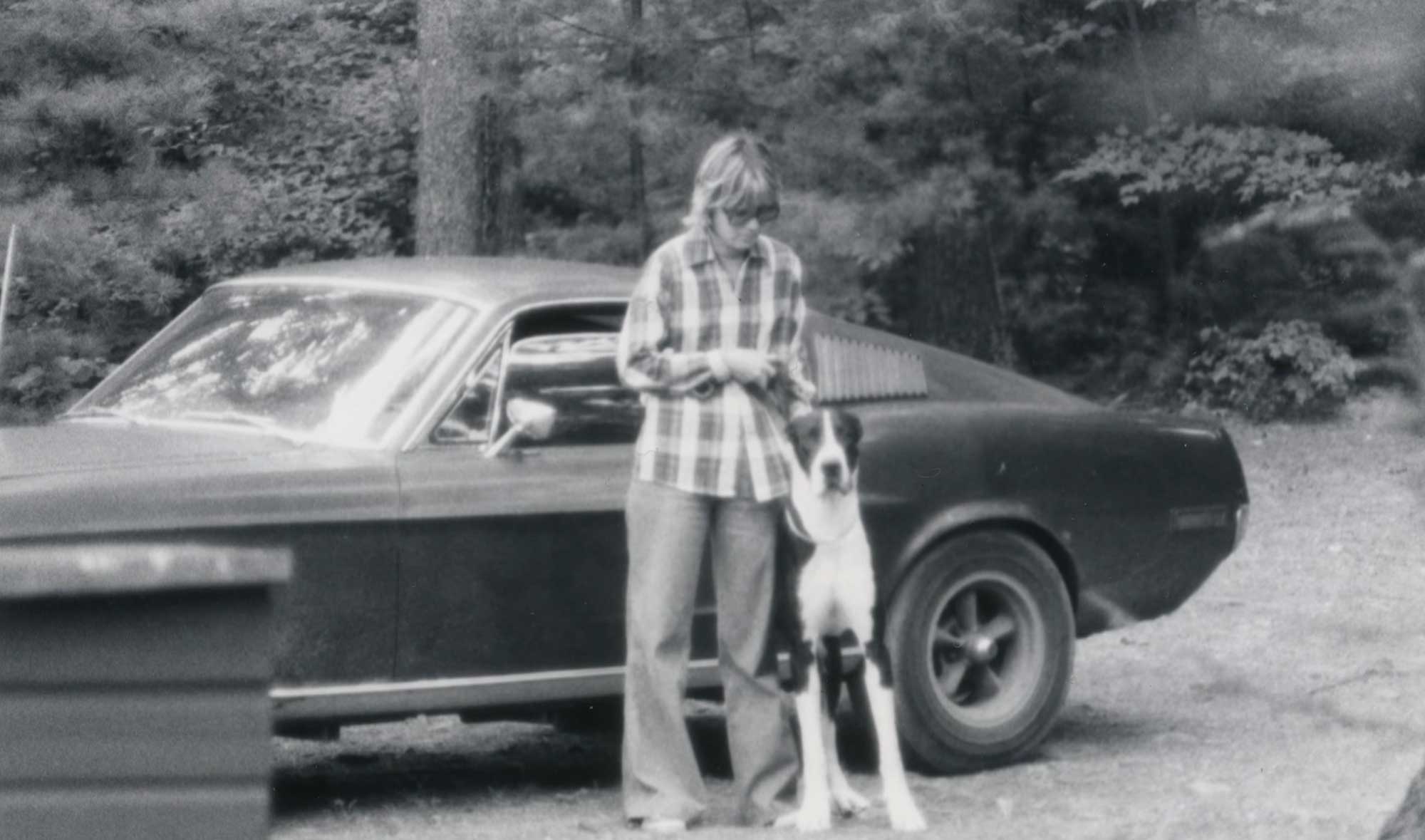 ABOVE: Sean’s mom used the car as a daily-driver until the clutch gave in. The car sat from that time, until it was brought back to running condition in preparation for Ford’s release of its third-generation Bullitt Mustang. (Photo Credit: Matt Marann Motoring/YouTube)

What would YOU do with the BULLITT Mustang?

Let us know in the comments below!