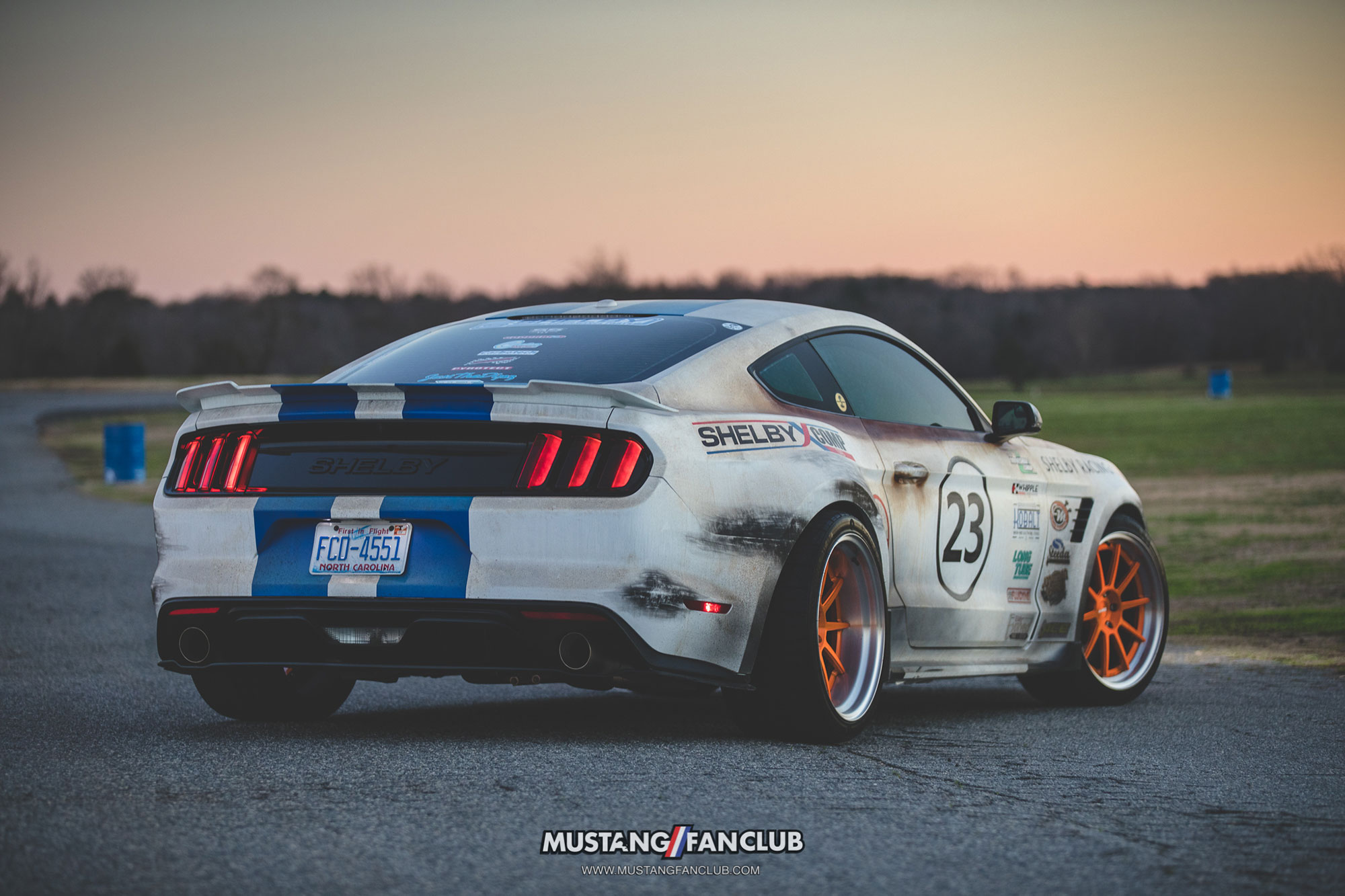 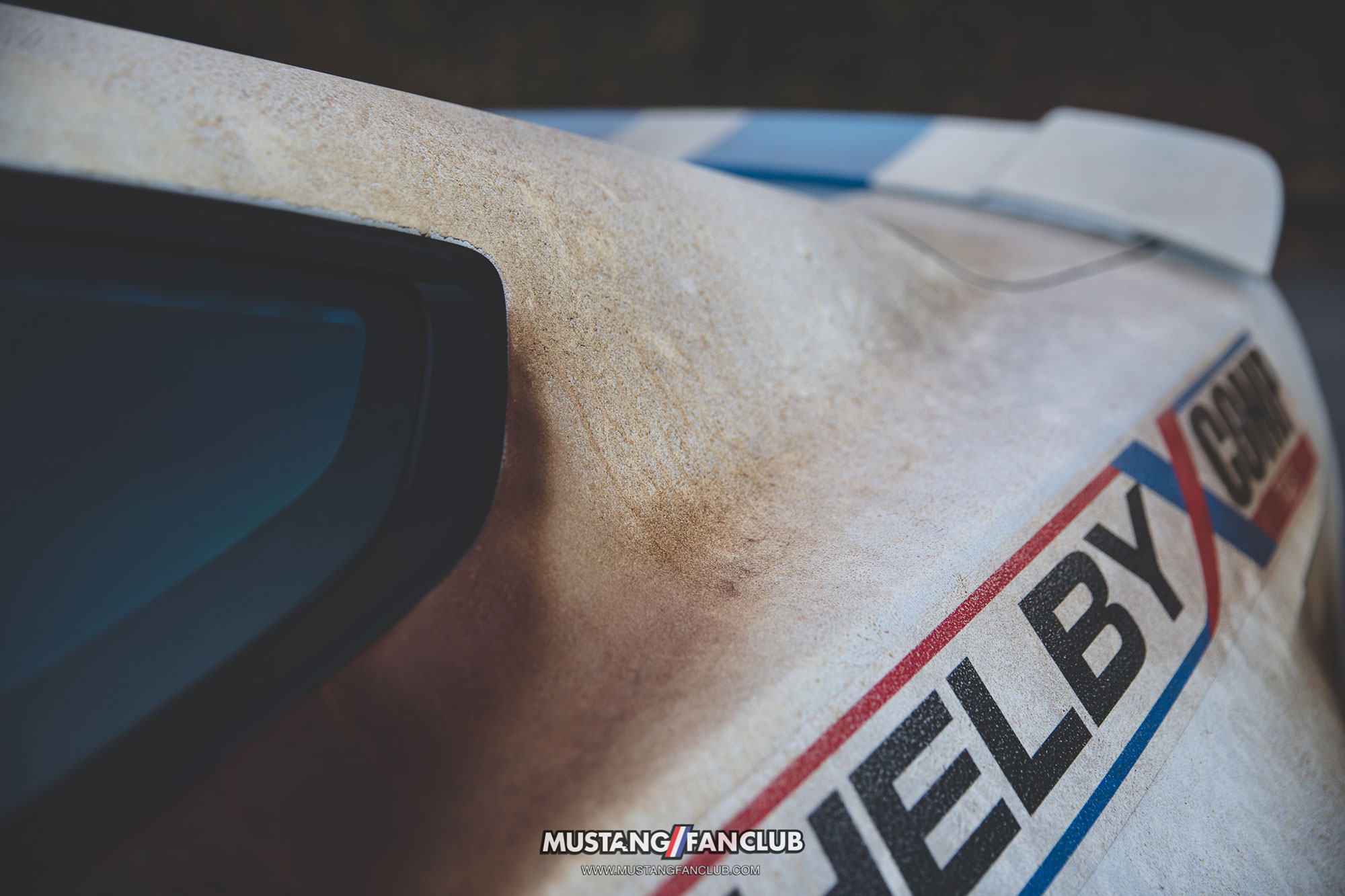 Jonathan had this idea of creating a “weathered” race livery on the Shelby Tribute Mustang. “We wanted the new model Shelby Mustang to look like Carroll had been racing the car, kicking Ferrari’s ass of course,” says Nerren. “Then he parked it in a field to sit for the last 50 years.”  Jonathan reached out to a close friend of his, Jason Brozak who owns Just the Dipz to put their idea in motion. Jason has been applying Plasti-Dip to his personal Mustang and several client’s vehicles for years.

Jonathan tells us that the Ingot Silver, 2017 Mustang GT was intentionally purchased to be his daily driver. That didn’t last long! With the SEMA crunch in full swing, Justin Tambasco had a two-week timeline in which to finish the full SuperSnake wide body conversion on the Mustang. That timeline quickly got shortened to just six days! After the wide body had been installed, Jason from Just the Dipz worked his magic and added the Plasti-Dip livery to the Mustang. While the Plasti-Dip was still wet, Nerren and his team got to work installing all the modifications to make this Mustang a real monster on the track!

Jonathan had this idea of creating a “weathered” race livery on the Shelby Tribute Mustang. “We wanted the new model Shelby Mustang to look like Carroll had been racing the car, kicking Ferrari’s ass of course,” says Nerren. “Then he parked it in a field to sit for the last 50 years.”

Plasti Dip. Below are a few steps that Jason B. completed during the transformation of this Ingot Silver Mustang GT to what you see in this article. The design and concept was a joint effort between Jason Brozak and Jason Anderson. The two Jasons communicated with each other to help make this project as seamless as possible within the strict deadlines. The full exterior livery of Jonathan Nerren’s Carroll Shelby Tribute Mustang is all

Jason Brozak tells us that most people don’t realize how much work went into this project. Most people see it and just think it’s a printed vinyl wrap, but it’s a completely custom Plasti Dip livery. This Carroll Shelby Tribute Mustang won Dip of the Year 2019 within the DipYourCar Facebook Group with 27,000 members.

For the 2020 season, Jonathan Nerren and his teammate Tyler Nelson will be traveling nationwide as the Shelby American Drift Team in the Pro 1 Series of Formula Drift. Their first event was scheduled to be in Long Beach, California April 10th and 11th, but was canceled due to the Coronavirus. Once things get back to normal, in addition to their Formula D schedule you can find them at events like Holley Ford Fest, Gridlife Midwest, Mustang Week, CJ Pony Parts drift demo, zMAX Dragway for NHRA 4-Wide Nationals, Street Car Takeover and SEMA. You can keep up with all of their action and schedule on social media: